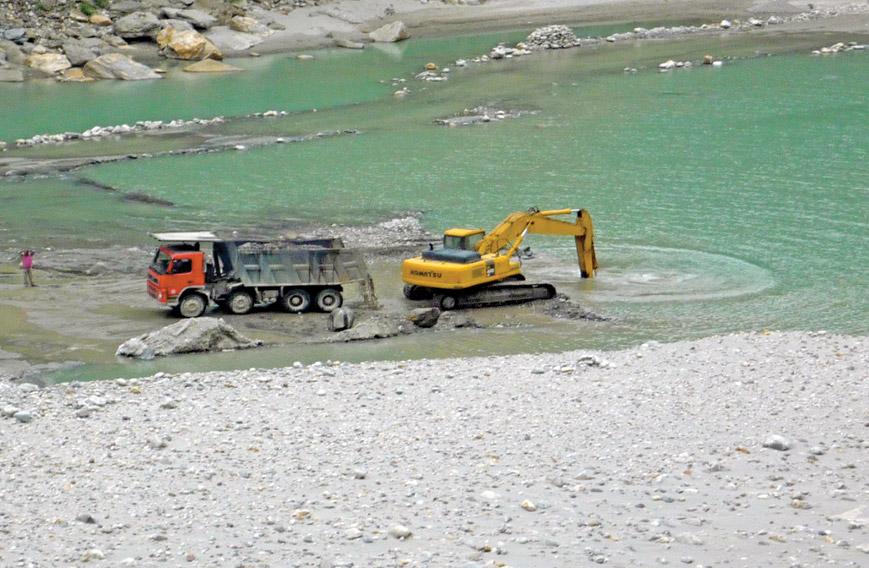 The mining of sand and gravel has emerged as a major regulatory concern in the last decade, especially because of the global construction boom and the spread of urbanisation. The removal of sand, which was earlier only for low-scale, household purposes or as a management exercise to prevent flooding, is now one of the most unregulated mining sectors in India, controlled by a ‘sand mafia’.

Actions of government functionaries to control illegalities have been marred by serious controversies. The courts have responded to litigation with clear orders that no mining should be allowed unless environmental approval has been obtained after impact assessment. Since many of these operations are ‘small-scale’, there have been suggestions that they be studied for impact and approved in clusters.

The Ministry of Environment, Forests and Climate Change (MoEFCC) issued a draft notification to regulate sand mining on 22 September 2015. The extraction of sand from riverbeds is clarified in this notification to be mining of minor minerals which are used in the cement industry and the production of glass, among other uses.

This activity is then further classified as a B2 activity as per the Environment Impact Assessment (EIA) notification of 2006. This notification categorised all activities requiring environment clearance as A or B, with the first to be processed at the ministry level and the second by new institutions to be set up in every state. The notification also allowed further categorisation of activities as B1 or B2, with state-level institutions having the power to decide which activity could be regarded as B2 (not requiring a full EIA).

The building and construction industry was stated upfront to be a B2 sector with no EIAs required, just a more detailed submission on project location and its impact. So sand mining, which is largely feeding this industry, is B2 as well.

After acknowledging that most sand mining takes place in clusters, the draft notification proposes a procedure for environment approvals. For sand mining activities being carried out in clusters of 5 ha and above, it has a graded approval process including public consultation of every cluster before appraisal. For a cluster of mines under 5 ha, the approval is at the district level. For clusters between 5 and 50 ha, approval is with the designated State Environment Impact Assessment Authority (SEIAA). For areas above 50 ha, the approval process lies with the MoEFCC and its expert committees.

But the draft notification does not mention whether these clusters are small mines being operated by a single owner or multiple owners. This has a huge bearing on how procedural accountability and legal compliance would be attributed. Further, the draft notification gives mine-owners the option of seeking environmental approval both at individual and cluster level. While an EIA would need to be done at cluster level, the environment clearance could be issued to an individual leaseholder.

The draft notification proposes a huge role for District Level Environment Impact Assessment Authorities (DEIAA) and District Expert Appraisal Committees (DEAC) for approvals and for monitoring post-approval compliance. But much remains to be clarified.

For instance, how will the DEIAA and DEAC determine that the same mine operator is not breaking up his sand mining operations into smaller units to get district-level approvals? A robust mechanism seeking local or block-level inputs would be critical.

There are also concerns about how the central government will constitute such district-level institutions. It would be critical for the Centre to collaborate with state governments and the district administration. This is also an opportunity to invite public nominations and include this in the process of institution building. It would be seen as good practice when regulatory expert committees are being set up at state and national levels too.

Finally, there is the old issue of what qualifications experts in such bodies should have. The criteria of DEIAA and DEAC appointments should not be limited to a person having a ‘degree’. These institutions would benefit from the experience and knowledge of people in human rights, ecology, farming, river restoration and other such public works even without a formal degree.

Many of these roads are no longer small village roads but could form part of important road corridors and highways. An impact assessment procedure will only help mitigate impact and find the least harmful options if such roads are linked with basic services. Such blanket exemptions defeat the spirit of laws that are meant to regulate social and environmental impact.

The proposed changes to the EIA notification are yet another lost opportunity to involve citizens in carrying out district-level surveys on the impact of sand mining and ensuring compliance with environment regulation, including conditions of approval. The onus of carrying out these surveys is on the DEIAA along with other designated government departments.

There is no scope for seeking public inputs in the preparation of this report or for including public comments or inputs. This is especially critical as the proposed survey format does not have scope to record the number of villages, people dependent on the river where mining is taking place and who is already being impacted or is likely to be. Neither does it have scope to record specific details of flora or fauna (especially rare, threatened or endangered) that is either already being impacted or is likely to be.

Not only do the mechanisms proposed seem hurried and requiring clarity, the increasing demand for this raw material from the construction and real estate sector is a burning issue not being addressed by regulatory agencies.

Kanchi Kohli is a researcher and writer. Email: kanchikohli@gmail.com