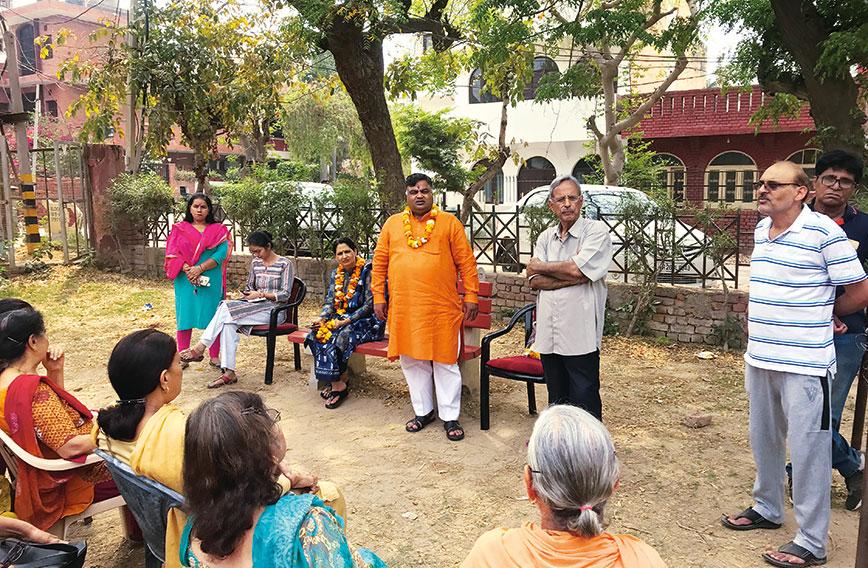 A woman councillor literally takes the backseat while her husband addresses residents in a Gurugram neighbourhood. The municipality is the first stage in a political career 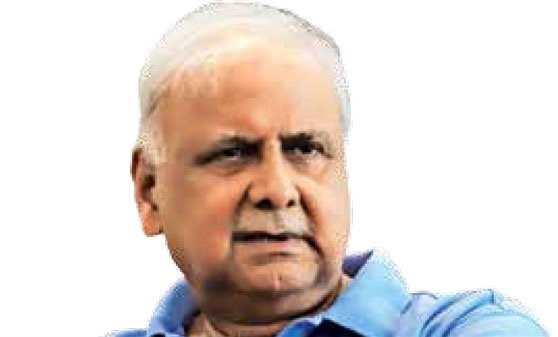 According to estimates India has around 4,000 cities and towns. The World Population Review estimates 40 of those have more than a million people each, 396 have between 100,000 and one million and about 2,500 between 10,000 and 100,000 people. The 74th Amendment to the Constitution, which came into force from June 1, 1993, lays down the provisions governing cities. Article 243Q envisages three kinds of urban areas: (a) a Nagar Panchayat (by whatever name) for a transitional area (an area in transition from rural to urban);  (b) a Municipal Council for a smaller urban area and (c) a Municipal Corporation for a larger urban area.

Governance of cities or urban governance seems to have defied the Indian genius because the widespread impression is that no city in the country seems to be properly governed. While some cities may be considered better than others, residents of almost every city seem to be dissatisfied with the way their city is run. I say ‘defied the Indian genius’ because there are cities, even mega-cities, in some other countries which appear to be run much better. Their residents do not seem to be as frustrated with their city governance as the average city-dweller in India.

A very large population, diversity and social complexities of India apart, there does seem to be something different about Indian cities that makes them especially difficult to govern properly. I will confine myself to analysing the political aspects of urban governance.

Though both politics and governance are inextricably linked, it may be useful to distinguish between the two. Politics is often described as the ‘dynamics of power’, meaning that politics is the process through which power distribution in a group, society, and so on is decided. Understanding this in the context of governance is important because power is a prerequisite of governance. The one who governs must have power over the governed. In a country or state, power vests in the government and in a democracy the decision as to who should have power is decided through the process of voting and elections. In simple terms, whoever gets more votes wins the election. Getting elected means that citizens/voters have ‘given’ the elected person ‘power’ to govern them.

Based on the above discussion, it can be said that decisions about the distribution of power have to be made before governance can begin. This is also the reason why politics and governance are inextricably linked.

“In many States local bodies have, on account of a variety of reasons, including the failure to hold regular elections, prolonged supersessions and inadequate devolution of powers and functions. As a result, Urban Local Bodies are not able to perform effectively as vibrant democratic units of self-government. Having regard to these inadequacies, it is considered necessary that provisions relating to Urban Local Bodies are incorporated in the Constitution….”

In addition, this amendment also added a ‘schedule’ to the Constitution, called the 12th Schedule, listing 18 functional items which will be the responsibility of Urban Local Bodies (ULBs). The often-stated aim of this Act is to revitalise and strengthen urban governments so that they can function as effective units of local government.

The amending Act also goes on to say: “The Legislature of a State may, by law, make provision with respect to — (a) the composition and the territorial area of Wards Committee; (b) the manner in which the seats in a Wards Committee shall be filled. …

(5) Nothing in this article shall be deemed to prevent the Legislature of a State from making any provision for the constitution of Committees in addition to the Wards Committees.”

Article 243-I added by the 74th Amendment required the governor of the state to “constitute a Finance Commission to review the financial position of the Panchayats and to make recommendations to the Governor” on how “the taxes, duties, tolls and fees leviable by the State” be distributed among the state government, ULBs, and panchayats; which of “the taxes, duties, tolls and fees” be “assigned to, or appropriated by” the ULBs; and the amount of the grants-in-aid to the ULBs and panchayats from the Consolidated Fund of the State.

Once again, after having stipulated the constitution of a seemingly independent commission, the Act goes on to say: “The Governor shall cause every recommendation made by the Commission under this article together with an explanatory memorandum as to the action taken thereon to be laid before the Legislature of the State.”

There are many other similar stipulations wherein power is seemingly devolved to the ULBs but almost in the very next sentence, the state legislature is bestowed the authority to overrule the decision of the ULB, whether it is providing for reservations “in favour of backward class of citizens”, “all matters relating to, or in connection with, elections to the Municipalities,” and many such issues.

It can thus be seen that ULBs are, in effect, far from being free to take action based on their own judgement.

To top it all, there is a provision for setting up a “District Planning Committee to consolidate the plans prepared by the Panchayats and the Municipalities in the district and to prepare a draft development plan for the district as a whole”. The first effect of this provision is that the individuality of the ULBs is lost in the planning for the “district as a whole”. More important, all provisions about the composition of the District Planning Committees (DPCs), filling of seats in the DPCs, their methods and procedures of working, are completely under the control of “the Legislature of a State”.

As if all this were not enough, the Act also says: “The Chairperson of every District Planning Committee shall forward the development plan, as recommended by such Committee, to the Government of the State.”

Now, let’s come to realpolitik. Given that the state government controls almost everything that happens and the way it happens, political parties active in the state take a lot of interest in elections to ULBs.

Taking the Municipal Corporation of Greater Mumbai as an example, as many as 2,275 candidates, representing something like 15 political parties, contested the 2017 election for 227 seats. It is, of course, a sad commentary that 13 percent of them had themselves declared under oath that they had criminal cases pending against them in courts of law and nine percent had declared serious criminal cases. Another indication of the importance of these elections is that as many as 30 percent of candidates were crorepatis, with the average assets per candidate being `1.93 crore.

The candidate with the highest assets reported that he had assets of more than `689 crore! The assets of the next nine candidates in the top 10 list were between `26 crore and `56 crore.

Elections to ULBs are often the first step in the electoral politics journey of an aspiring politician. That is one of the main reasons why these elections are watched with great interest by state-level politicians. Another reason is the opportunity to create vote-banks at city level. These aspiring politicians also become an integral part of political party structures.

This participation in political party structures takes several forms. At one end of this spectrum are some individuals who are party-agnostic. They develop their personal power base which helps them create vote-banks and then negotiate with different parties at election time to look for the best match between them and a party. At the other end of the spectrum lie party faithfuls who stay with the same political party, often all their active lives, regardless of whether the party does well or not and even whether the party treats them well or not. Many, of course, fall in between these extreme ends of the spectrum and are best described as opportunistic.

The actual conduct of elections to ULBs is more or less the same as elections to assemblies and Parliament and suffer from the same infirmities and maladies. There is, however, a major structural difference. The responsibility of conducting elections to ULBs lies with the State Election Commission (SEC) in which the ULB happens to be located and not with the Election Commission of India (ECI) which is responsible for conducting elections to assemblies, Parliament and for the offices of president and vice-president of India. This has major implications.

As against only one ECI, there are as many SECs as there are states. Article 243ZA of the Constitution, inserted as part of the 74th Amendment, says: “The superintendence, direction and control of the preparation of electoral rolls for, and the conduct of, all elections to the Municipalities shall be vested in the State Election Commission referred to in Article 243K.

(2) Subject to the provisions of this Constitution, the Legislature of a State may, by law, make provision with respect to all matters relating to, or in connection with, elections to the Municipalities.”

(2) Subject to the provisions of any law made by the Legislature of a State, the conditions of service and tenure of office of the State Election Commissioner shall be such as the Governor may by rule determine.…”

The provisions regarding appointment of the SEC put additional power in the hands of the state government to exercise control over the ULBs. The net result is that ULBs have very little, if any, autonomy to perform the functions assigned to them, ironically, by the Constitution itself!

Devolution of powers is a devious phenomenon. Politics is all about power. People contest elections to gain access to and exercise political, constitutional, and administrative power. To expect politicians, and successful ones at that, to assign their power to someone else is actually completely unrealistic. Altruism, defined by one dictionary as “the principle or practice of unselfish concern for or devotion to the welfare of others”, is not a characteristic found in too many politicians, if it is found at all!

So, the Constitution, in theory, devolved powers to ULBs but gave complete control to the state government to decide how these seemingly devolved powers were to be exercised by the ULBs. In practical terms, therefore, the 74th Amendment has not succeeded in achieving its objective, and ULBs continue to remain as “weak and ineffective” as they were before the enactment of the 74th Amendment.

Enactment of the 74th Amendment by Parliament was a political act and putting the ULBs under almost complete control of state governments was also a political act. The first one was seemingly positive and the second one, devious. The devil, in this case, lay in the details, or the wording, of the specific articles inserted in the Constitution. It can, therefore, be said that politics has prevented effective urban governance in India.

Jagdeep S. Chhokar is a former Professor, Dean, and Director -in-charge of the Indian Institute of Management, Ahmedabad and a founder-member of the Association for Democratic Reforms (ADR).