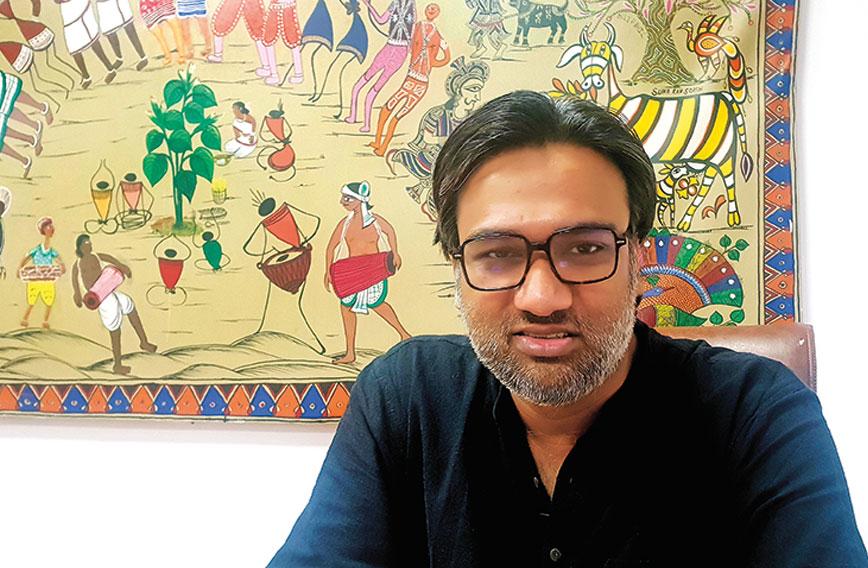 Sourav Roy: ‘The team rallied around the spirit of service. This was not the time to step back’

‘Listing farmers on Zomato to sell their crops was a first’

SOCIAL initiatives at Tata Steel are known to run deep. The company invests in them over the long term with people and funds. Efforts in healthcare, education, agriculture and social empowerment are designed to bring transformational change. Partnership with government ensures scale, bonding with communities engenders trust.

When the pandemic arrived, these were great strengths to have. But in themselves they were not enough. The virus provided new challenges in the infections it was causing and the lockdown.

Quickly turning around a large ship like the Tata Steel Foundation was not easy. The foundation, set up in 2018 to bring all social initiatives under one umbrella, has some 800 people. Leading the effort was Sourav Roy, head of CSR, who spoke to Civil Society on how a balance was struck between ongoing programmes and the demands of the pandemic.

When the pandemic broke, what did it mean for Tata Steel’s CSR team and your ongoing programmes? How much did you have to pivot to remain relevant?

I remember first convening a meeting of our own leadership and then following it up with meetings all the way down to the last person in the field. Internally, there was no dearth of communication.

We are about 800 people under the Tata Steel Foundation and we needed to get a sense of what would be a safe and correct alternative for our people in terms of reaching out. There was also the concern that we could end up being the spreaders, you know. So, safety was a big thing.

But the conversations we had resulted in rallying the team around the spirit of service. This was not the time to step back. We needed to take decisions and reach out quickly.

When you talk about the spirit of service, was your focus entirely on the communities you normally work with? How did you define your catchment?

The first thing was internally as a team to raise our hands and say that this was a time to be counted, which we did.

Externally, we looked at it in two ways. First was, you know, to have a clear eye out for who was the worst affected, whether from the lockdowns or in medical terms from COVID-19. That was part one.

Part two was that we had made long-term promises to communities under our programmes in health, education, agriculture and so on. We knew there would be setbacks but we didn’t want to just walk away and come back six months later to recalibrate. Obviously, between the two there was an overlap.

In  20-odd days after the beginning of the lockdown on March 22/23, we actually came up with what is the 10-Point Combat COVID-19 Agenda. It consisted of 10 programmes. Very interestingly, right till the end of the first wave, we did not feel the need to add an 11th programme to the agenda. We just deepened the 10.

What were the initiatives in the 10-point agenda?

Three broad buckets, if you will. One was to meet deficits in well-being among people. It could be medical care, shelter, food or information.

A second bucket was meeting economic deficits such as resulting from the loss of livelihood.

And a third was actually creating platforms for concerted public action.

We clearly saw the need to get into distributing food. So there were about 60,000 meals a day, you know, which would have been cooked and distributed to the worst-off such as daily wage-earners. It lasted for about two and a half months.

Where was this? Around your plants? Was it in Jamshedpur city, Jharkhand, Odisha…

Primarily Jamshedpur, but also in the panchayats in and around our operating assets in both Jharkhand and Odisha. Primarily, it was Jamshedpur. You know, one of the points of concern that we had was whether a model like this would create dependencies. To be very careful, in certain places we did not do cooked food, we did dry rations instead. In a place where we knew that the food issue existed but didn’t think we should create a dependency, we actually created a ‘cash for work’ programme.

I think by end of March we realized that there was an issue around mental well-being. Suicide helplines were already working in Jamshedpur and in large parts of our operating area. We offered to support them with whatever they needed whether it was volunteers, counsellors, phone lines or publicity material.

These were helplines that were already running? Or were you helping set up helplines?

They were existing helplines. In Jamshedpur there is an organization called Jeevan, which runs a suicide helpline. We offered to help increase their capacity in terms of additional phone lines, additional space to operate out of, whatever it might be.

Also, in certain cases, capability. We had our own volunteers who were trained over two weeks by people already managing a helpline. We didn’t want to get into untrained counselling. The volunteers would then free up the core team of the organization to handle the more complex cases.

Many things we actually did, we were the first, I think, across the country, though I can’t validate that for you.

For instance, we actually saw huge crop losses around us because markets were closed. So, what we did was we tied up with Zomato, and actually set up what is probably Zomato’s first straight farm-to-home supply chain.

Zomato had just come into Jamshedpur and some other areas and we saw an opportunity in leveraging their delivery capacity and also keeping delivery boys employed.

Since we have extensive agricultural programmes, we knew where the pain points were. We set up nodal collection centres and enabled direct registration with Zomato through farmer-producer organizations. The Tata Steel Foundation didn’t come in between and the money would go straight to the farmers. I think we did a few thousand tonnes of vegetables at a good profit to the farmers and without supernormal profits, as that might be. And that became very popular in Jamshedpur.

How would this work out? You would get it picked up by Zomato and delivered to the customer or what?

Let’s take Jamshedpur, for example. We had three nodal points here, where every morning vegetables from 600 farmers would arrive. The vegetables would be sorted, graded, washed, but not sanitized of course.

Was the picking up of the vegetables done by you or by Zomato?

From the farmers, by us.

From the fields of 600 farmers you would be picking up the vegetables and bringing them to the nodal points?

That is correct. Our team would oversee it. But we wanted this to be a farmer enterprise. So there were two farmers’ collectives that were involved. All the financial dealings, everything, were done through the  collectives. We also saw it as an opportunity to build their capacity.

Zomato had created a specific space on its app called ‘From The Farm’. Each of the three nodal points was listed as a restaurant equivalent on Zomato.

If you clicked on, say, X, a full list of vegetables would show up. You could place your order and then the Zomato guy would pick it up and deliver it to you.

Yes, on to the farmer. Each morning, the prices were determined by the farmers’ collective and the farmers in a participatory process. At no point did we want the Tata Steel Foundation to fix prices. But we enabled the process.

As with farmers, there are many other programmes that Tata Steel’s CSR initiative has been running over the years. MANSI, which has to do with rural health, is one of them.

Oh, absolutely. I think we found a huge amount of very organic synergy and symmetry between what we have been doing and what that has meant for a COVID-19 response.

With MANSI, we have been working in about 12 blocks. It’s currently being expanded to cover three districts.We have Operation Sunshine, which is a digital platform for tracking high-risk pregnancies till they are addressed.

One of the earliest things that we did from April onwards was to start what we call an Expected Date of Delivery or EDD tracking system for expecting women. We went back to a database of 3,000 pregnant women. We started tracking when is the expected due date, created all clearances, road movement clearances, paperwork,  factored in an additional day,  created financial support to make sure that they go to an institution.

Our experience in MANSI was critical in tracking the high-risk cases. Normally, 92 percent of the high-risk cases are successfully addressed. In the six months that COVID-19 was happening, the first wave, the number went up to 97.5 percent. It was purely because there was more vigil. It was because of the Sahiyas or frontline health workers.

How many ASHA workers or Sahiyas, as you call them in Jharkhand, do you work with?

Correct. We work very closely with public systems. You know, even distribution of relief material was actually guided by ASHA workers, because they knew at village level which families were in strife.

We introduced a cash-for-work programme for Sahiyas. We said that, other than your regular work, why don’t you do wall paintings with public service messages? We gave them `500 for every wall painting.

It went really well. I think we created at that time about 3,500 wall paintings which doubled as public service messages most of the time in the local languages. When villagers get together and say a particular message should go out, it has a strong resonance.

You know, today in the second wave, using the same MANSI cohort, we have this whole programme that we’ve done on COVID-19 awareness and on vaccine hesitation. There was vaccine paranoia that was happening. And our Sahiyas were meant to go out and get people to register and get people to take their vaccines.

Every year we do a programme in tribal languages. Around 26,000 youngsters learn six Adivasi languages through our programme. As a result, we have this entire network which came in very useful because it is deeply embedded amongst tribal communities in Jharkhand, Odisha and parts of West Bengal. So these synergies were available.

The synergy is also sometimes in the messaging and how you customize a message for a certain community. Circles of trust are built through invoking symbolism.