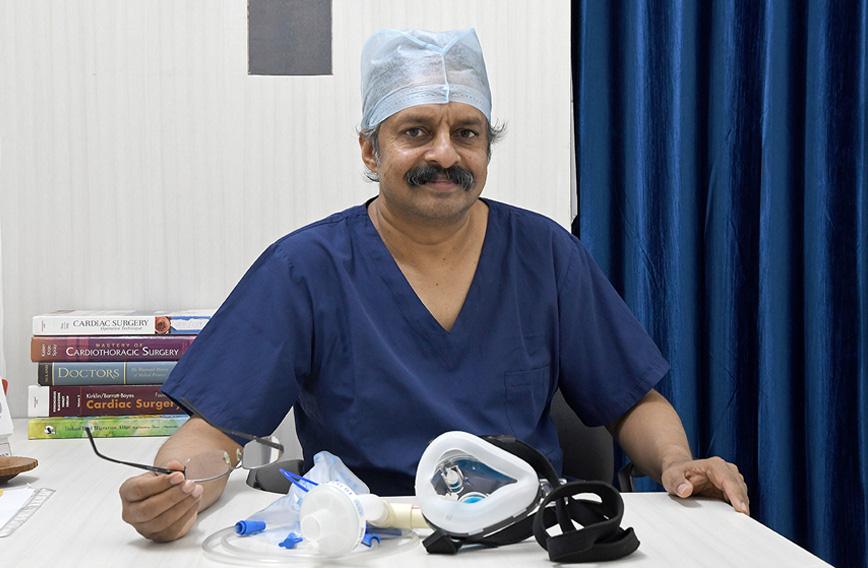 Heart surgeon makes mask to cut oxygen use by 50%

A mask that can reduce by as much as 50 percent the oxygen consumed by a COVID-19 patient in hospital conditions has been devised by a cardiovascular surgeon in Nadiad, a small city in Gujarat.

Dr Sanjeeth Peter, director of the DDMM Heart Institute, had to quickly find a solution to arising demand for oxygen and shrinking local supplies of cylinders.

Using a urine bag, discarded plastic pipes and a filter, he set about remodeling the NRBM or Non Re-BreathableMask, which is used to give patients oxygen before they reach the stage when they require full-fledged ventilation.

“Cardiac surgeons are basically plumbers. Fixing pipes and channels is what we know to do,” says Dr Peter who took only 10 minutes to figure out what was wrong with the design of the NRBM when used under the stressful circumstances of the pandemic.

He identified several problems with the NRBM. First was that the oxygen bag had a single inlet and it was located at a right angle to the patient’s mouth and nose. This he found made it difficult to put the patient in a prone position. In a prone position the patient lies on the stomach and oxygen levels significantly improve.

He also found that the NRBM bag was made from flimsy material which could easily crumple and result in obstruction to the flow of the oxygen, especially if proning were attempted.

Dr Peter decided instead to use an ordinary urine bag, which was made of stronger material. Instead of a single inlet, he provided for an inlet in much the way a urine bag functions.

He could now position the bag in front of the patient instead of at a right angle. The patient could then be placed on the stomach quite easily for proning, which would not only increase oxygen saturation but reduce the demand for oxygen.

There were other innovations as well. The NRBM has openings on two sides when it is strapped on to the patient. The result is that the patient doesn’t get all the oxygen that flows into the mask. A lot of it escapes and together with it the virus that the patient breathes out.

Dr Peter changed the mask to one which completely sits on the nose and mouth with the exhaled air going through the outlet in the bag. To prevent infection from spreading, he fitted a pipe with a filter to the bag’s outlet 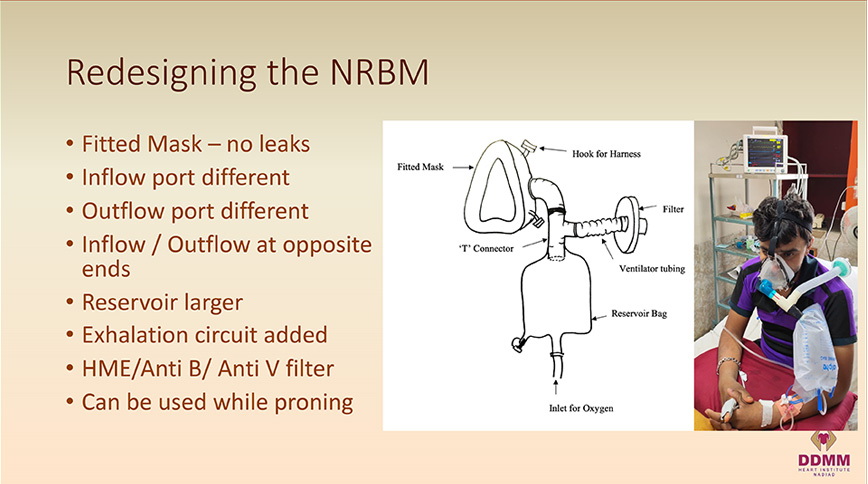 The re-modelled NRBM resulted in oxygen consumption by a patient going down by as much as 50 per cent, says Dr Peter. So, if a patient was beginning to draw 15 or 20 or 25 litres per minute of oxygen as he had observed, with the modifications the consumption came down to 8 or 9 litres per minute. The NRBM is normally used when a flow of 5 litres or more is needed. But something about the virus in this second surge was making patients draw more oxygen than expected.

Dr Peter cautions that there are also downsides to his innovation and that it should be used under supervision in a hospital environment.

A problem that can arise is an increase of carbon dioxide within the environment of the mask. A watch therefore has to be kept on the patient to make note of drowsiness or weakness.

Another problem is that since the mask sits tightly on the patient’s face, it can leave marks if used for a long time.

Indian doctors working in villages and small towns are known to come up with innovations to deal with the challenges they face locally. Rural surgeons are known to have come up with surgical procedures which their counterparts in big cities wouldn’t imagine as being possible.

Dr Peter qualified as cardiac surgeon from the Christian Medical College in Vellore. He has a fellowship from Australia. But he has chosen to work in Nadiad since 1996 because he feels that his skills are most needed in these remote parts of Gujarat.

The DDMM Heart Institute is an inter-faith initiative between the Methodist Church and the local community which wished to remember their popular Member of Parliament, Dharamsinh Desai, who died of a heart attack. It does more than 300 heart surgeries in a year and has an awesome reputation in Nadiad and nearby for quality heartcare.