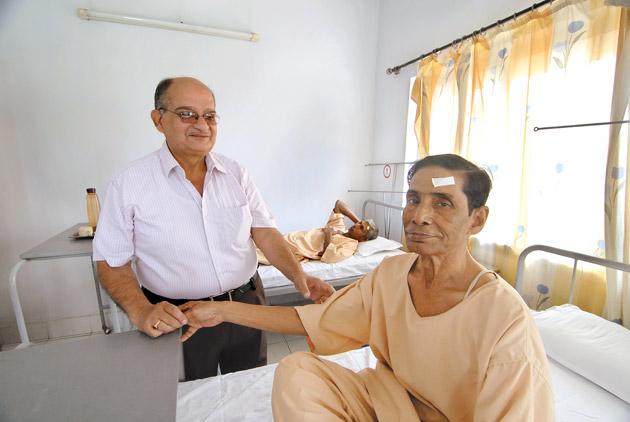 Low-cost eye care for everyone at Budge Budge

About 15 km from southwest Kolkata in a nondescript small town called Budge Budge, members of the local Rotary Club have for nearly two decades now developed a highly successful model of affordable healthcare. The state, local charity, foreign philanthropy and paying patients have all contributed.

The GRSM Rotary Eye Hospital, which began in 1996, now treats over 30,000 outpatients and conducts around 2,000 cataract operations a year. Half the operations are done free. Outpatients pay Rs 20 to register, Rs 15 for a subsequent visit and Rs 30 for a refraction test (prescription of glasses). Paying patients choose from a number of packages ranging between Rs 2,500 and Rs 25,000. There are 18 free beds and seven paying ones.

Nobody, absolutely nobody, is turned away because of an inability to pay. If you have a BPL (Below Poverty Line) card your cataract operation is done free and the hospital gets Rs 3,000 from the government under the Rashtriya Swasthya Bima Yojana (RSBY). Last year the hospital did over 100  RSBY cases. Those who have neither the RSBY card nor money are put through an informal assessment by the administration and a fee, if any, is determined for the patient to pay.

Pradip Chitlangia, then chairman and now patron-in-chief of the Rotary Club of Budge Budge Welfare Trust which set up the hospital and runs it recalls, “After the first two years we never struggled to perform free operations.” Dr Niloy Mukherjee, secretary to the trust during its early days and now a trustee and director for the hospital, says, “Healthcare can never be a losing proposition.”

Saturday afternoon is set aside for those who cannot afford Rs 20 for registration. They need to pay only Rs 10, inclusive of OPD procedures. Significantly, few turn up then to avail of the concessional rate.

Most healthcare debates in the country see opinion polarized – for free state-funded healthcare versus private paying healthcare, with or without health insurance. The Budge Budge Rotary model indicates that quality healthcare can be delivered at affordable rates when free and paying patients are treated under the same roof. A mixture of cross subsidy and philanthropic contributions underwrite free care for the poor.

Paying patients in a hospital demand and help establish certain standards which deliver value for money. They also help build the hospital brand. The chairman of the Budge Budge Municipality got his eye surgery done in the hospital. On the other hand, the need to cater to free patients creates tremendous pressure to keep costs low, helping paying patients too. So successful is the now standardized Budge Budge model that it is being replicated in 50 hospitals coming up all over the country, 10 of them in West Bengal.

If there is any one intellectual inspiration and role model that the Budge Budge hospital had before it then it is the famous Aravind Eye Hospital. Before the hospital started, six of its key movers, including Dr Mukherjee, went to Madurai and did a one-week course in community eye care at Aravind Eye Hospital. They revealed to the trainees a critical truth: the more free patients you have, the more paying patients you will attract.

A key element in affordable healthcare is getting doctors to offer their services not for free but at less than market rates. A doctor visiting the Rotary hospital once a week earns Rs 10,000 a month; the current lead doctor who comes five days a week earns Rs 1 lakh a month. A doctor earns a token Rs 100 for performing a free surgery. A free surgery costs the hospital Rs 1,200. Of this, Rs 400 is garnered locally (cross subsidy and local philanthropy) by the hospital and Rs 800 comes from overseas Rotary Clubs. A thousand free operations fetch a matching grant of Rs 8 lakhs.

Dr Mukherjee is an example of one who works to earn and also has a social agenda, with invaluable help from his wife. He came to Budge Budge in 1979 to work in the municipal maternity hospital as a gynaecologist and stayed on at the job till 1998. For his private practice he began with a fee of Rs 10 which is now Rs 100. If you think that is abysmally low, he counters by saying, “I have more than one apartment in Kolkata and I have not missed out on any of the good things in life.”

The key to his professional success is the reputation he has built up for conducting normal deliveries. As a result not only does he get a whole lot of women patients who would normally go to a woman gynaecologist, many of them are Muslims who are usually more conservative.

The hospital began when Rotary Club members keenly felt the need for a permanent hospital as the eye operation camps they conducted in schoolrooms for poor villagers posed risks of infection. Follow-up and measuring outcomes was difficult.

CORE TEAM MADE IT HAPPEN

Chitlangia recalls how a core team made it all happen. In 1996 Dr Mukherjee, a prime mover and source of professional advice, persuaded the Budge Budge Municipality to give on long lease the land within the maternity hospital premises on which stood the unused structure of a defunct chest clinic.  Jagannath Gupta, a local philanthropist, spent Rs 9 lakhs to construct a proper two- storied structure. Eight Rotarians contributed Rs 20,000 each and the hospital got going with a medical team led by Dr Subhasis Nag. In 1997, its first full year of operation, the hospital conducted 300 operations. It managed with two operating beds and a borrowed microscope.

Vital help came to the hospital early in its life from Sight Savers International, a UK based charity, which organized help from Rotary Clubs in the UK and donated equipment for the free care agenda. Vital support has been given for 40 years by the Rotary Club of Munster-St Mauritz. All remember Dr Peter Berghaus who nurtured the friendship between the two clubs.

At the end of the day the hospital books a surplus. This year it is likely to be Rs 20 lakhs. Last year revenues totalled Rs 87 lakhs and expenses Rs 79 lakhs, including capital expenses. The hospital has earned a cumulative surplus of one crore rupees which has been ploughed into the latest equipment. It has 26 full time employees out of whom 20 are women who are either in the administration or serve as technical assistants.

Services like pathology, spectacles, kitchen, laundry and maintenance are outsourced. Originally staff were paid a salary but it was realized that productivity could improve. Then they switched to a system of salary plus incentives.

Technological change, the advent of phaco-foldable lens procedure, has greatly standardized operations so that cataract removal has become a game of numbers. The more patients you have, the more you can cut costs. The Budge Budge hospital has been doing just that by reducing a package that used to cost Rs 7,500 to Rs 5,500 with all procedures being phaco. Chitlangia says that their main aim is to keep costs at around half of what would hold for a Kolkata facility.