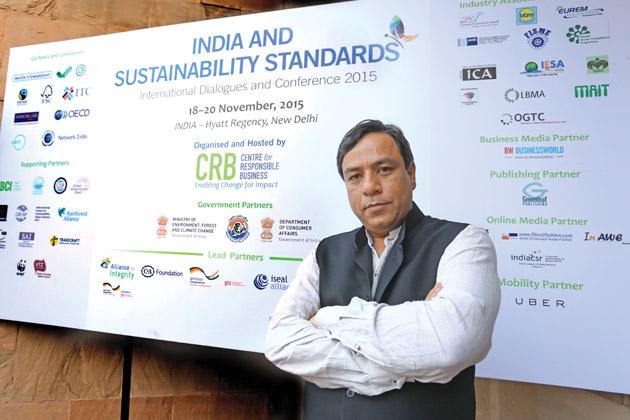 Bimal Arora, chairperson of the Centre for Responsible Business, at the conference on ‘India and Sustainability Standards’

Companies that choose voluntary compliance and report thoroughly on their own sustainability build trust among stakeholders. They also strengthen their internal processes and stand a better chance of being globally competitive. How do Indian companies fare? Do they see reporting on themselves as an opportunity or a mere formality? Is sustainability seen across the range of engagements with society? Or is it limited to a handful of factory floor practices? Is it wrongly confused with Corporate Social Responsibility (CSR)?

To find out, Civil Society spoke to Dr. Bimal Arora, chairperson of the Centre for Responsible Business (CRB). Dr. Arora has been interacting with Indian and global companies on questions of sustainability for more two decades. He has been a keen observer of corporate behaviour. In November, CRB organised a conference in New Delhi on ‘India and Sustainability Standards’ to encourage Indian companies to learn and introspect.

What is the state of reporting by companies in India. It is, after all, five years since the voluntary reporting guidelines were framed.

But when you say growing, what exactly do you mean? What is the quality of the reporting?

It is getting serious in the leadership companies. The bigger ones like the Tatas and Birlas have been engaging with the reporting process. The way it works is that the initial five years is the learning phase. During this time a company is only ticking boxes and is not using reporting as a tool for sustainability. It goes on like this for five or six years before the realisation comes that there are more advantages to be got from reporting. So, in companies that have been doing it for 10 years you will see that the quality of reporting improves.

Why should it take so long for Indian companies, which are otherwise globally so well-integrated?

Global companies also take that long. It is not just Indian companies.

But we have examples to learn from. We know how the rest of the world has gone. Why does it have to take us so long, especially when the problems of sustainability are rampant in India?

I can cite you studies from the US in the 70s, which said that it takes five years for responsible business to get internalised and institutionalised. It hasn’t changed a bit till date.  Every organisation has its own reasons and dynamic, and its own politics of course. So, learning depends on the levers. At this point of time reporting is for the levers we have and not sustainability.

So what you are saying is that at present for Indian companies reporting is more of an obligation. They don’t realise that there are implications way beyond just ticking the boxes.

What is lacking? Is it an adequate regulatory framework? Is it the absence of advocacy, evangelism, corporate leadership, education?

Has this got something to do with the kind of management education that is imparted? You know, there is some attempt at creating social awareness, but it is finance and so on that people go for. It is these guys who then run companies that impact the lives of millions.

That definitely is a factor. Not just in India but across the globe. Europe is better. North America is better as far as education is concerned. India is still...

Take, for instance, your conference on sustainability. I don’t see educational institutions like the IIMs involved.

There is the University of Manchester doing a roundtable. I have been in touch with Oxford University. Michigan University has shown a keen interest and would like to be involved in our next conference...

But where is IIM Ahmedabad or ISB?

So there is no vision for sustainability?

There is a growing sense that CSR has become the equivalent of the EIA. You need it and you go out and get it by any means. Is that correct?

In my own view this law is very interesting. When leadership is lacking (in companies) you need compliance. You need the ticking of boxes.

But CSR is not sustainability.

The beautiful thing with the CSR law is that it has brought the subject to the board level.

Do most people handling CSR lack knowledge and specialisation?

It will take time for companies to internalise what the law is really about. You begin with compliance but when you have people handling things, they evolve. Companies have gone from rural development and population control to more sophisticated initiatives in meeting their social commitments. I was away from the country from 2002 to 2010 and when I returned I was pleasantly surprised that CII had the ITC Centre for Sustainable Development and their language was very different. It was interesting that an industry body had taken a leadership role. FICCI was not far behind. So the five-to-seven year period that I referred to with regard to companies also applies to a country.

But industry bodies aren’t convincing. Coca-Cola, for instance, has played a key role in CII’s water forums. Yet Coca-Cola has been chased away from locations by communities because its plans to draw on water sources were unsustainable.

The experience of beverage companies in India has led them to rethink globally about their policies on water. It has been a process of learning, a journey. The leadership in big companies has realised that they can’t do without dealing with civil society. These are the people who sit in meetings of the World Economic Forum — so you can’t have your backyard dirty.

In India there is a growing mistrust of industry. Take the example of Volkswagen and emissions. All those ads about German engineering and quality. Who will believe what companies report about themselves?

You can’t avoid that. There will always be companies who will fudge.

So there will be question marks over what Indian companies claim they do?

No, I don’t agree. There will always be companies who find ways to do different kinds of things. But that doesn’t mean that overall everyone is wrong.

What do you think government needs to do more to get companies to be sustainable?

Government in my view is making it easier for businesses to do business. Political will is not an issue anymore. The challenge is administrative. When I meet secretaries in the Government of India, and many of them are involved with the conference we are holding, I perceive a huge change in their attitude. It is very heartening. Companies need to seize this opportunity through better reporting and self-regulation.

When it comes to ‘Make in India’ what is the sustainability challenge before the country.

But companies will come here if they can pollute, exploit natural resources and so on. India lacks regulatory expertise. We have a dysfunctional environment ministry. Pollution control boards don’t have qualified staff.

We don’t live in a world in which the government is the only institutional actor doing everything. In India now the shaming and naming of companies has begun by Indian activists in a style not dissimilar from the West.

How ready are Indian companies for the UN’s sustainable development goals?

We are stuck with the broader issues right now. The nitty-gritty is not known.