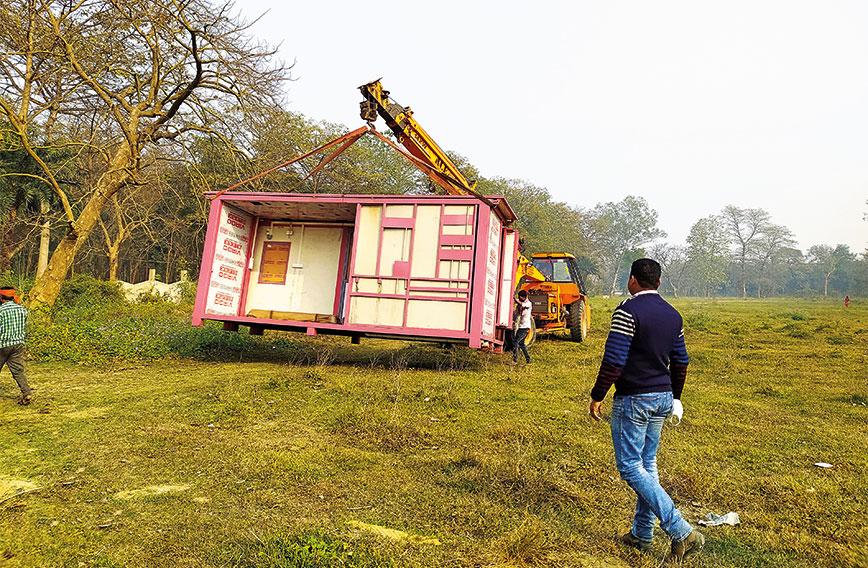 Innovations abound: The first structures for a cancer hospital in Muzaffarpur arrived on a truck from Chennai

The social sector does not lag in innovation 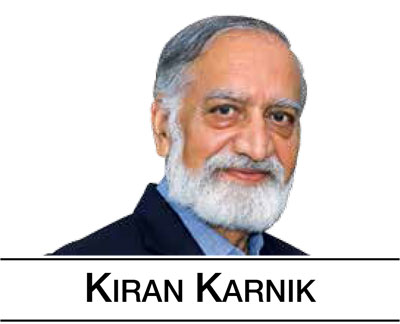 On March 25, 2020, the Prime Minister announced a complete and almost immediate nationwide lockdown. From the next day, hundreds of thousands of daily-wage workers, most of them migrants, lost their jobs. With no income, meagre savings and no social security safety net of any kind, hunger and destitution stared them in the face. Fear about an unknown disease added to the worry about death by starvation. At such a time, both survival and emotion dictated that they return to their village home and family.

The sudden lockdown left them stranded far from home. Thousands rushed to railway stations and bus terminals; finding no transport, many thousands just began to trek hundreds of kilometres. Most were stopped and just milled around not knowing what to do. Even as the government machinery began to slowly comprehend the situation and decide on action, non-governmental  organizations (NGOs) stepped in. They provided water, food and correct information: all three being equally essential. Later, NGOs supplied free rations in rural areas, a big help to millions of new-jobless.

As the virus turned into a pandemic, NGOs helped spread awareness of safety measures and countered vaccine hesitancy. Some facilitated vaccinations for the elderly, who are more vulnerable to COVID-19, and even arranged to transport them to vaccination centres. When the second wave peaked and the public health machinery practically broke down, NGOs tried to ensure the provision of oxygen to the sick and also helped in cremating COVID-19 victims. Some facilitated assistance from abroad: both oxygen/equipment and funds. Some put together teams to aid local administrations and hospitals. The role of NGOs was widely recognized, and top leaders from government appreciated the important contribution of civil society.

For decades, NGOs have played a role in a wide range of fields. A majority focus on service delivery, taking education, health and other services across the country. Their work in child nutrition, female reproductive and general health, and livelihoods has been exemplary. Mid-day meals for schoolchildren is an example, with one NGO alone providing millions of meals to students. Its model of doing this through hygienic, state-of-the-art kitchens and equipment has won wide acclaim.

In education, for decades NGOs have done excellent work, especially in science education and — more broadly — the promotion of scientific temper. This includes unique initiatives like the Children’s Science Congress and the Science Express. The latter was an exhibition-on-wheels which made stops at railway stations across the country, taking science and the method of science to children (and adults too) in thousands of towns and villages. NGOs have made mathematics enjoyable through games and kits, and created interest in space through model rocketry and astronomy.

In many of these areas, innovations and methods pioneered by NGOs have been integrated into the government system, thus enabling scaling. They have taken on the task of training the teachers, health workers, or other concerned interlocutors, so as to facilitate the process. In this joint work with the government, sometimes further innovation and improvements have come about.

Some of this work has been done in cities, but most of it reaches out to the rural populace and — within that — to the disadvantaged. This last-mile/last-person connect is possible because of grassroots NGOs which are well integrated into these areas. Their selfless work over the years has helped to develop a close relationship with the local populace, enabling them to be trusted partners — so vital in healthcare but also, more generally, in understanding their needs, problems and in eliciting genuine feedback.

There is much else that NGOs do in the field of service delivery, not only supplementing and complementing the efforts of government, but — as noted earlier — often bringing a fresh approach and innovations, which can then be adapted for use across the state or country.

NGOs play a vital role in another area too: advocacy for policies that would be beneficial to the disadvantaged and actions to advance these. This includes promoting, establishing and trying to enforce many new rights for all citizens. Amongst these are free and compulsory primary education, the right to information, food and (in rural areas) employment. Years of hard work, sustained advocacy and mobilisation of people by NGOs has paid off through laws that mandate these, putting in place essential safety nets for the poor and, through RTI, strengthening democracy by ensuring transparency and minimising information asymmetry.

VOICE OF THE PEOPLE

Much work of NGOs is done in partnership with government, but there are areas where the two may not see eye-to-eye, especially when the NGO puts forth the voice of the disadvantaged or affected persons and fights for their rights. Examples include forest-dwellers seeking to protect their habitat, farmers preventing their land from being acquired for industry or other purposes, locals protesting against the ravages of mining, people opposing dams that inundate their land or road construction that results in floods and landslides, policies that threaten their well-being, etc.

In such cases, NGOs often act as organizers, or amplifiers that take the voice of those affected to the administration and to other countrymen. Typically, governments — irrespective of their political orientation — frown on this role (as do many companies). Yet, in a democracy, what can be more important than to give voice to the voiceless, and seek to get those who will not listen to hear? For, amongst the most critical functions of an NGO — best captured in a cliché — is to speak truth to power.

The disagreements become confrontations and even conflicts when the government — central or state — chooses not the path of dialogue and discussion, a genuine attempt to jointly seek a solution, but prefers instead to use the power of the State to crush dissent.

This has been witnessed over decades, in a variety of fields, across the country: from the Chipko movement of the 1970s (in Uttarakhand), the anti-dam protests (about Sardar Sarovar and in the northeast), the anti-nuclear power-plant demonstrations (in Tamil Nadu and Maharashtra), anti-mining mobilisation (in Odisha), to the more recent anti-CAA sit-ins in 2019. In such cases, the official machinery paints NGOs (and individuals) involved as “anti-development and progress”.

In the agitation against new farm laws too, there was no prior consultation and little dialogue. After a year of sustained protests by farmers — who were prevented from marching into Delhi — the government was forced to relent by repealing the laws. Meanwhile, the agitators had again been branded: not merely anti-reform or anti-development, but also Khalistanis and anti-national. Of late, this tag of being anti-national has become an increasingly common description of anyone who questions government policy.

Those who organize the disadvantaged and fight for their rights are identified as Naxals, especially in Chhattisgarh and Jharkhand, and jailed under stringent laws, with no bail. The case of 85-year-old Stan Swamy springs to mind: a dedicated social worker, arrested and refused bail by an obviously biased judiciary and treated inhumanly by the authorities concerned. Even if he were actually an “anti-national”, refusing a drinking straw to a person with Parkinson’s defies any concept of humanity that most would have.

Such actions and the targeting of NGOs, including well-known national and international ones, has certainly tarnished India’s image as a democracy. More importantly, these have trod on the freedoms that are an inherent part of all citizens rights in a democracy. It is both the responsibility and duty of NGOs to sustain and develop these rights, especially in situations when the other arms of democracy fail to do so.

It is unfortunate that governments — state and central — have, particularly in the last dozen years, brought in laws and practices that constrain NGOs. The very premise of FCRA is “guilty, unless proven otherwise”. NGOs are required to jump through hoops to cross the seemingly intentional obstacles put in their way. One example is the requirement for all NGOs, irrespective of their location, to open their main FCRA account in one specific branch (in Delhi) of one specific bank. Even if the government feels the need to access all data on remittances, balances, and transactions, in these days of core banking technology such information can be easily gleaned irrespective of which branch of the bank hosts the account.

Recent amendments bar an NGO from making sub-grants from foreign contribution. This completely upsets the working model of many an NGO which partners with small, grassroots NGOs for the last-mile delivery. This model is similar to that of companies, whose distribution chain has smaller partners who deliver to customers. Will the government even contemplate barring Nestle or Hindustan Unilever from paying their distributors and local shops?

It is obvious that small NGOs, with deep local knowledge, are best suited for last-mile delivery and interaction. However, they have neither the capability to write detailed proposals or to meet the stringent compliance requirements of large foreign donors. This is best done by bigger NGOs. In this model, each (big and small) plays the role for which it is best suited. The new law destroys this synergy and disrupts the ecosystem of NGOs.

In addition there is the general constraint on “political activity” by NGOs receiving foreign funding. Any advocacy can, very clearly, be classified as political. In many ways, fighting for rights is necessarily political.

In contrast, in the corporate arena, government is encouraging and actively promoting the inflow of foreign funding and, in most sectors, even permission is not required. It is well-known that many companies have active advocacy programmes, directly and overtly seeking to influence government policy. Many companies work in “sensitive” areas and, in fact, are encouraged to make investments there. Further, there is now the Ministry of Home Affairs  audit for NGOs receiving foreign funds, but not for companies. Why, then, this paranoia about foreign influence through NGOs and this lack of trust in them?

It is, of course, known that some foreign donors seek to influence the agenda of NGOs. However, there are many other ways of handling this. Nor can one argue that NGOs are all knights in shining armour. It is a very large and diverse community, and includes more than a few who may be fraudsters and charlatans or do indulge in various undesirable activities. But who will seriously contest that such black sheep also exist in all other arms of our democracy: legislatures, government, judiciary, media and corporations? Yet, none of them is burdened with the controls and suspicions that NGOs suffer.

NGOs are a key pillar of a democratic society. They assist the government to reach the far corners of the country and the most disadvantaged in our population; provide relief and succour at times of natural or man-made calamity; create new, innovative models of development and help the government to adapt these and scale their impact; get authentic feedback from the grassroots; uphold civil liberties; and ensure that the voiceless have a say. Most important, they serve as the conscience of the nation and ensure that we remain a robust, vibrant democracy. It is in the interest of the nation to support and encourage them.

Kiran Karnik is an author and has been engaged with civil society for some five decades. Currently, he is Chairperson of HelpAge India.