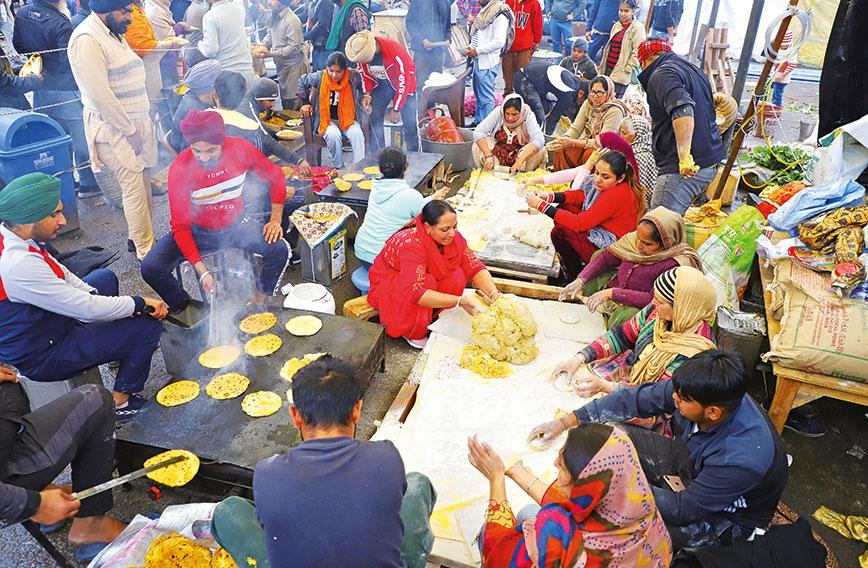 As this piece is being written, ‘ordinary farmers’ who were also outstanding citizens leading the historic farmers’ protests at Delhi’s borders, are going home to a heroes’ welcome from other farmers and citizens. Flowers are being showered from chartered planes and from hundreds lining the highways as lengthy convoys of protesting farmers head home.

It is only now that the media is picking up stories of how the local poor at the protest sites are likely to go hungry after the morchas are lifted, and how local enterprises and shops will be affected without the economic boost provided by the protest townships.

Stories of valiant old and young citizens, of men and women, of farmers and their supporters, of people from different states and socio-cultural diversities are emerging. The new friendships discovered and bonds built are being narrated as feature stories in media reports. India’s historic farmers’ movement of 2020-21 has, after all, emerged victorious against an unbending and uncaring government!

There are numerous analytical pieces that can be written about various aspects related to this farmers’ movement — both on the demands of the protesting farmers, as well as the organizational aspects of the movement.

What the farmers achieved is actually way beyond either of these interesting facets. Farmers are squarely back on the political landscape of India. They are asserting their identity as farmers proudly. They have discovered the strength of unity, of working together by putting aside various differences. They have learnt to draw strength from their diversities.

When they lifted the morchas and went back home, protesting farmers knew that on the demands front — which were mainly four when the movement began and became six by the time the Prime Minister announced the government’s decision to repeal the three anti-farmer laws — the ending of the agitation was less than satisfactory.

However, farmers also know and have internalized deeply, the other positive outcomes of the struggle. Many smaller struggles around numerous local issues had fructified successfully during the course of the 12-month agitation. While the agitation has been called off, the struggle and movement will continue, the protestors vowed.

If  civil society is to be defined as ‘a community of citizens linked by a common cause and collective activities’, India’s farmers’ movement led by the Samyukt Kisan Morcha (SKM) is indeed one of the largest civil society groups out there. A wide array of organizations are referred to as civil society and this movement really reflected the entire diversity of such organizations. It is a movement which led to newer and larger alliances even as existing civil society organizations swung into action and new groups were formed spontaneously.

It was in October 2020 that a strong farmers’ platform called the All-India Kisan Sangharsh Coordination (AIKSCC), an alliance of hundreds of farmers’ organizations, put out a call to other organizations which were not part of the joint platform, to join hands for a coordinated struggle against the Centre’s three ‘black farm laws’.

The call by the AIKSCC was unconditional and inspired confidence in others to step forward. By that time, organizations in Punjab had already put aside their differences and were agitating jointly as a platform of 30 organizations.

The AIKSCC joined hands with two organizations, the Bhartiya Kisan Union (BKU) Rajewal in Punjab and BKU Chaduni in Haryana to begin with. A five-member coordination committee was created on October 27, 2020. This body then reached out to the Rashtriya Kisan Mazdoor Sangh (RKMS) which was a national alliance of more than 150 unions, and the Samyukt Kisan Morcha was formed in the early half of November 2020. By the time the current agitation was called off, other than AIKSCC and RKMS, a new alliance got created with some unions which were not part of either alliance called the Bharatiya Kisan Mazdoor Federation.

Importantly, social media communities as a new-age manifestation of civil society, were prominently visible and active in the farmers’ movement.

The diversity of the farmers’ organizations themselves was quite impressive. In  terms of size, while some farmer unions were strong only at their tehsil level, others were national organizations with tens of lakhs of farmers as members. While some unions were more mixed in terms of caste and gender, others were mostly of upper caste and upper class male farmers. While some unions were mainly focused on landless agricultural workers, others reflected the concerns of large farmers.

The much-maligned khaps of northern India played a big role in supporting the farmers movement. Khaps are, admittedly, a caste-based institution representing upper castes and patriarchy. For those of us who would like to see caste annihilated and patriarchy destroyed khap panchayats are institutions that are not progressive.

Yet they are a civil society mechanism in themselves based on social kinship networks. They identified the profession of farming as their primary identity and they were the backbone of local support and solidarity for protesting farmers at various morchas.

In terms of political ideologies too, the spectrum ranged from Left to right-of-centre. Some were affiliated to political parties while most others were not, and they kept away from electoral politics.

Irrespective of this diversity, this unprecedented movement forged bonds of unity and coordinated collective action in unexpected ways. Decision-making was democratic and consensus-based. It appears that tough lessons learnt from past movements helped the leaders in dealing with potential fissures with greater maturity and wisdom.

When the morchas were lifted on December 11, 2021, and the current agitation called off with the struggle suspended, the Samyukt Kisan Morcha prioritised the unity of the joint platform more than one or two pending demands! This was on a clear understanding that if unity is upheld, more battles can be fought with the same strength or greater strength in future.

The future of the SKM, in fact, promises to be in the form of a wider and stronger platform, with more farmer unions likely to join the platform as the struggle for the Minimum Support Price (MSP) as a legally-guaranteed entitlement of all farmers, begins in right earnest.

Many civil society groups, especially charitable organizations and some NGOs, played a supportive role in this movement. They were not an active part of the protests, or part of any decision-making in the Samyukt Kisan Morcha. However, they took up activities that they might have undertaken in a disaster relief setting!

Medical aid camps and support to commuting services for locals were some of the NGO activities. By March 2021, a sophisticated hospital sprang up close to the Singhu Border stage, for instance, with an ICU also included. Some organizations started library services and even classes for children of local communities as well as protestors, at morcha sites. Gurdwaras and others set up langars that fed tens of thousands of people regularly. The local poor enjoyed the warm food that they got over the past many months, thanks to the kisan andolan.

Other than the assertion of citizenship that all participants in this movement reflected, one key element that spurred contribution to the movement is the notion or ethos of ‘sewa’. This, obviously, is from the Sikh religious-cultural background, but it caught on quite widely across communities.

The kind of sewa that was witnessed in the movement is quite expansive and impressive. Young men and women who gave up their jobs to volunteer in the movement; social media teams that got created and were constantly on the job to spread the message of the farmers and garner wider support; lawyers’ associations who stepped in to provide free legal services and take up protest actions in solidarity; numerous doctors who camped at  morcha sites to provide untiring services.

There were local villagers who kept up  a steady supply of vegetables, grains and milk for the protestors. Many philanthropists donated in cash and kind. There were people who maintained 'tent cities' and visitor tents at the morchas. Volunteers at the stages of the protest sites. Transporters’ associations who provided bus services to ferry people, free of cost. Citizens who donated blankets and shawls to all protestors. Volunteers who were running local newspaper services. A woman protestor who was stitching clothes free of cost, and a cobbler mending shoes and bags on a voluntary basis.

Everybody had a role to play and a niche service to provide. There were artists and sportspersons who were lending support in their own way. Several of these people and groups were not organized in any centralized manner by the SKM, but somehow fell neatly into place in running vibrant protest townships smoothly for 379 days!

The climbdown by the Government of India from its obstinate stand and the repeal of the three central farm laws are a great positive development in our democracy. Many state governments and almost all political parties in the Opposition were in support of the farmers, and the Modi government was forced to blink.

It is clear that the SKM-led farmers’ movement did not achieve all its demands in the current agitation, even though many other deeper intangible positive outcomes were obtained. It is nobody’s case that Indian farming does not need ‘reforms’. There is much more to be done, both in terms of what needs to change, and how civil society can organize itself to bring about that change.

There is no real bridge right now between nirmaan and sangharsh in the world of agriculture and farmers’ empowerment. The element of rachnaatmak sangharsh (constructive agitation) is missing in farmers’ agitations, in terms of presenting lasting and real alternatives. There is a need for most farm unions to innovate their organizational mandates and structures.

On the other hand, the academic world and the NGO world do not even converse with farmers’ unions in any meaningful fashion. Deep conversations across civil society organizations, which help cross-learning in developing discourse and practice of both nirmaan and sangharsh, are needed. It is hoped that, as we move forward from this historic and inspirational farmers’ struggle, such conversations are possible — for both farmer unions and NGOs to learn from each other, and for greater strength and solidarity.

Kavitha Kuruganti  is a social activist known for her work related to sustainable farm livelihoods and farmers’ rights.