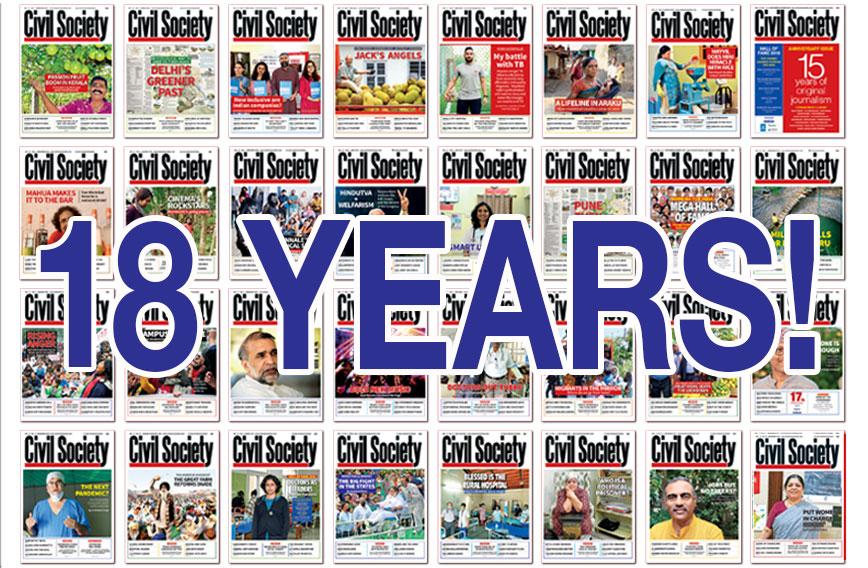 The joy of joining the dots

As our magazine completes 18 years, how should we look back upon the time we have spent? How should we also look ahead? Looking ahead is somewhat scary since publishing on the whole is in a precarious place right now and, as a business, Civil Society remains as undercapitalized as it was when we began. Looking ahead, therefore, comes with its spells of vertigo. We would much rather keep our heads down and live for the day.

But when we look back over 18 years, we feel only great joy in having served to join some of the dots in a country as vast and diverse as ours through this magazine’s stories and pictures.

We had decided right in the beginning that our emphasis would be on people and their lives and not so much on opinion and commentary.

Public spats and angry outbursts were also not for us. We wanted to quietly go about our stories and bring out a magazine with the best possible production standards.

In particular, we wanted to cover those people who were doing interesting and significant things for bridging the social and economic gaps in the country, but weren’t normally getting covered. If others couldn’t see the stories in their work, we could and wanted to bring them to wider notice. Our interest was in successes and achievements and the capacity to overcome problems.

With such an approach we would not only have an understanding of problems but also those efforts that were leading to solutions. Both were important to us with the emphasis being on solutions.

‘Everyone is someone’ was and has remained our slogan over these 18 years. It isn’t just a line that sounds good. To us it has been the guiding principle for our coverage and the basis for any modern society.

This anniversary of our magazine comes at a time when NGOs are the subject of some amount of controversy. Are they needed? Who is funding them?  Are they enemies of the country?

The concerns raised by our National Security Adviser, Ajit Doval, are not entirely unfounded. It is naive to think NGOs can’t become pawns of larger global interests. Also, when money flows internationally from governments and corporations they choose their causes.

But we have to say from our experience that NGOs and activists play an important role in helping governments solve the problems of development. They create awareness, connect with communities and solve last-mile problems that governments just don’t know to handle.

Whether it is healthcare, solar power, digital access, waste management, financial inclusion or education, NGOs have been problem-solvers and gamechangers. Their energy and inventiveness should continue to be harnessed in the process of nation-building.

Faced as we are with inequality and a huge development deficit, the spirit of voluntarism is needed more than ever to help more people come up. NGOs represent that spirit of inclusion and progressive fraternity around which better-off Indians can and should gather.

Our special contributors in this anniversary issue have each dwelt on the enormous work that NGOs do in different domains. Where controversy exists, they have offered a perspective, but let there be no doubt that we can’t do without a vibrant social sector.

In this magazine we have, right from the beginning, defined civil society as going beyond NGOs, think tanks and other such organizations.

When we started out 18 years ago the term civil society was not as widely in currency in India as we find it today. Globally, it was regarded as a counterweight to hold governments to account and ensure that people in power didn’t stray.

We felt for our magazine the term should include anyone who contributed to the strengthening of our shared values as a society. It could be a doctor, lawyer, company executive, government official, industrialist, entrepreneur, scientist, farmer, teacher or journalist. In fact, the more people remained socially-driven in their professions and everyday lives the better. We have engaged with both socialists and those with rightwing leanings as well as a religious orientation.

People’s movements of which we have seen several in the past 18 years, have led to greater democratization by going beyond urban elites and reaching out to the very poor and disenfranchised. These movements, as distinct from formally structured NGOs, have resulted in forward-looking legislation such as on the right to information, rural employment, access and jobs for the disabled and rights of street vendors.

Our magazine has covered all these and more, invariably picking up trends much before others. We have also tracked the transition from the voluntary sector to politics. Arvind Kejriwal was our first cover story when he was still an income-tax officer on long leave experimenting with the RTI campaign.

Over time, we tracked his journey into politics through the anti-corruption movement. And soon the activist became the Delhi Chief Minister in our stories! For the record, our third issue’s cover story in 2003 was headlined: ‘NGOs in politics’. It was about crossing over from activism to politics. So, we can lay claim to being prescient.

But it is in presenting the stories of ordinary people that we have found real joy and satisfaction. These are people who have brought change around them and would perhaps have gone unnoticed if we hadn’t turned up as inquisitive journalists in our quest for interesting stories. 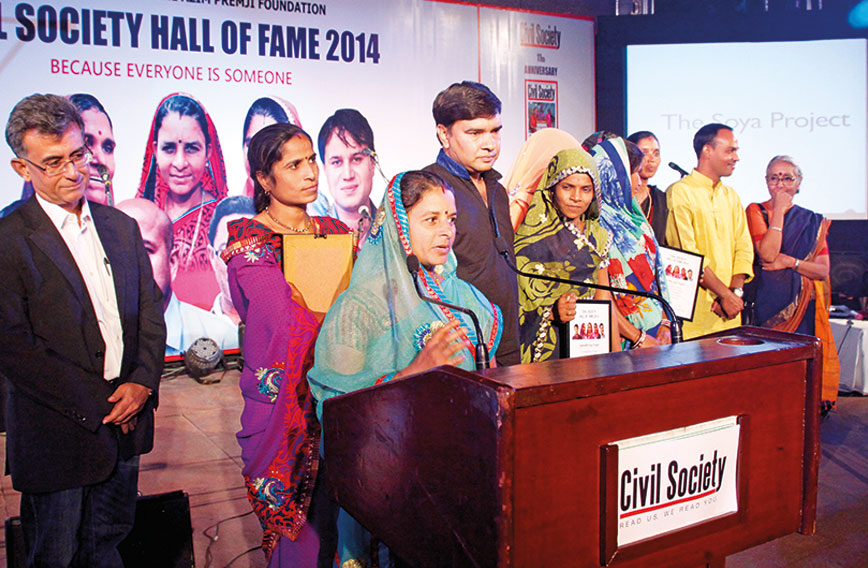 Savitri Gaur from Bundi addresses the Hall of Fame audience in Delhi: ‘I am the CEO of my company’

We remember standing in a warehouse with women farmers in Bundi in Rajasthan. With some help they had started a farmer-producer company, the Samriddhi Mahila Crop Producers’ Company Ltd, to market the soya and other crops that they were growing. Their sense of empowerment was awesome. We brought them to Delhi for the Civil Society Hall of Fame event at the India Habitat Centre. When Savitri Gaur made a short speech beginning with ‘I am the CEO of my company’, she received resounding applause from the urban middle-class audience that had packed the amphitheatre. (See picture.)

Joining the dots for us has meant putting out in our magazine the stories of people in far-flung corners of the country and connecting them with our very diverse readership. Beyond our journalism, the Civil Society Hall of Fame has been a mechanism through which we have celebrated changemakers, identifying them and bringing them finally to an event in the heart of the capital to be feted.

There was Sanjay Sahni, an electrician on the streets of Delhi who used the internet to uncover corruption in rural job payments in his village in Muzaffarpur in Bihar. Dr Jogesh Chaudhury in Barmer transformed a decrepit PHC on his first posting as a government doctor. In Kerala, Dr C.R. Elsy helped farmers get GI status for a range of agricultural produce.

We discovered Uncle Moosa running a library movement for young people in Arunachal Pradesh. And lest we forget, there were three women from Jongsha village in Meghalaya who used RTI to uncover corruption in the ration system. At the Hall of Fame event in Delhi, the Jongsha women sang an anti-corruption song on an open microphone using background music from a mobile phone. They had rehearsed the song overnight while being our guests in Delhi.

These names are just a few. The list is much longer and fills the pages of issues we have brought out with unfailing regularity over the years.

While we have mostly gone out in search of stories, there have also been those stories that have come in search of us. In India there is an innate desire to connect and cohere. Not pull apart. Our challenge as journalists has been to help make this happen with credibility and skills.

It has been heartening to see a story from one corner of the country find resonance in another. We know because our readers tell us. A response we have consistently received over the years is that our magazine makes our readers feel good about India. That is so interesting considering the problems we face as a nation.

The pandemic has brought with it suffering and gloom. But even at its worst it has also shown how much people care for a fair, just and inclusive India. Our time in the past 18 years has been spent discovering talented and progressive Indians who each day do their bit to build a modern country. They speak different languages, represent different cultures and aren’t alike to look at. But we in this magazine know them to be one people in search of a common future.

NGOs have a special role to play in crafting such a common future. As India speeds ahead with digitization, an enormous opportunity presents itself, but there is also a digital divide.

Helping people use computers and smartphones and the services of the internet is the work for which activists are needed. Governments and companies, however well-intentioned, don’t have the capacity to bring about such change. Nor can inclusion be achieved through markets alone.

Issues pertaining to digital access are also complex and call for an understanding of technology and its social implications. If we need activists to promote digital access, we also need activists to caution us that the internet comes with its negatives and is not the magical solution to all our problems. We have seen this when the issue of net neutrality arose over Facebook and its onslaught with Free Basics.

An area we have been particularly interested in is healthcare. Privatization in healthcare has brought limited success and mounting problems. Finally, it has been left to the voluntary sector in healthcare to shape the models that work for the majority of Indians who seek basic facilities.

From our stories we have found that qualified professionals who are socially responsible make the perfect change leaders in an increasingly complex world. In affordable housing, for instance, it took finance professionals, who had stepped away from mainstream banking roles, to redefine creditworthiness and give out those small loans to borrowers in the unorganized sector. An activist spirit was necessary to achieve this. The government and the large banks, both private and public, couldn’t do it. The way forward is through pragmatic partnerships. It is important that the government create the atmosphere and contexts in which talented people and institutions discover each other in the interests of the larger social good.