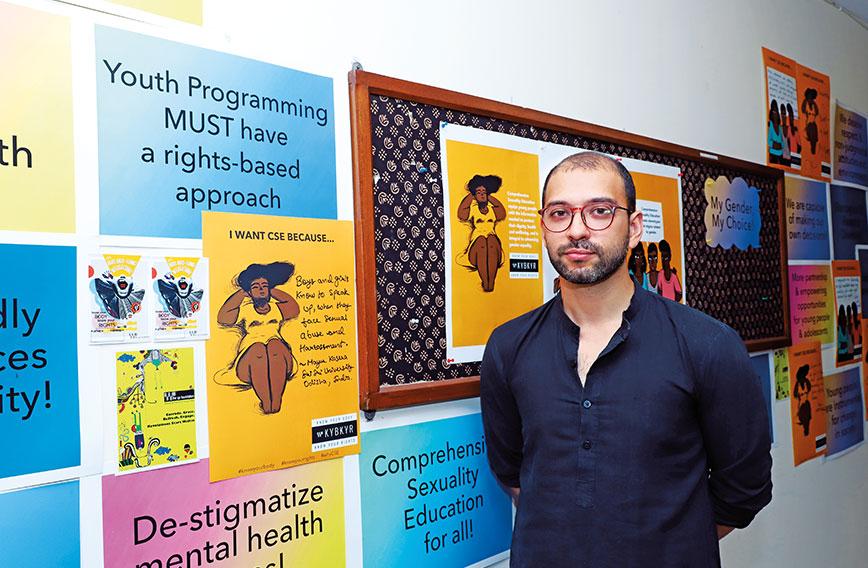 Talking to young men about women

TWenty-three-year-old Gaurav Tripathi comes from a large, conservative joint family headed by his paternal grandfather in Lucknow.  His mother is a government schoolteacher but the other women are strictly in purdah. Tripathi found the discrimination the women in his family faced disconcerting. His own attitude towards girls was shaped in this patriarchal environment.

In February 2016, along with 14 other young men aged between 16 and 30 years, Tripathi joined a programme called Mardon Waali Baat organised by the YP Foundation. All the young men had skewed notions of gender, masculinity and sexuality. Most belonged to deeply patriarchal families. They had never thought about a woman’s consent in a relationship, or of gender inequality or gender-based violence.

“Mardon Waali Baat basically trains young boys to examine in depth how gender and sexuality play out in their own lives and how they take stances against it, what their reality is, their ideas of an equal relationship. It also looks into a man’s aspiration of being in a relationship, his aspiration regarding the world and how being a man creates a certain pressure on his behaviour,” says Manak Matiyani, executive director of the YP Foundation.

Matiyani conducted many of the training programmes himself with Anuj Gopal Pandey, programme coordinator for Uttar Pradesh (UP).

Between February and September 2016 the 15 young men, termed peer leaders, underwent interactive training over seven days on gender, sexuality and violence, with a focus on examining masculinity and its links with power, patriarchy and violence.

Building the feminist leadership of these young men became a major concern. As Matiyani says, “The bent of the programme was to facilitate a perspective in the young men that since they are automatically given a leadership role because they are male, their real leadership lay in giving up that space for other genders to come up.”

The training, workshops, discussion and bi-monthly meetings with experts  were  a great ice-breaker. For the first time the men were able to freely discuss their personal experiences of sexuality and sex. The discussions also cleared many of their misconceptions about a girl’s consent, the role of girls in domestic work and definitions of violence.

The young leaders were then trained for on-ground action. Along with the YP Foundation project team, they compiled youth-friendly digital and audio-visual resources like films, posters and other IEC (Information, Education and Communication) material to get other young men to think about masculinity, gender-based violence and human rights. They came up with innovative forms of communication like using their own photos and developing postcards, podcasts,  short films and the use of social media. 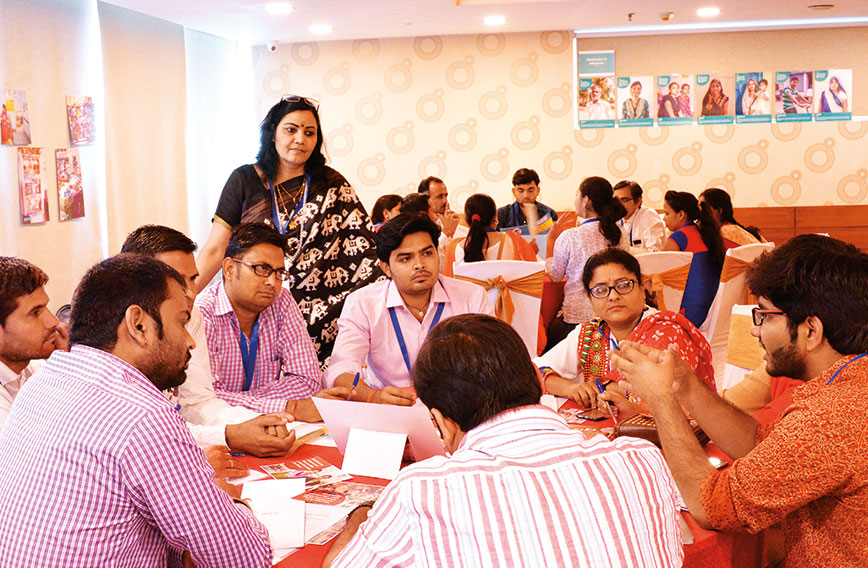 A meeting of the Udaan team

And finally the young leaders were ready to test the ground. They reached out to over 750 other young men in colleges, schools and institutional care homes in Lucknow. They conducted interactive sessions on subjects like masculinity, gender, power, self, gender-based violence and the like through games, film screenings, talks, breaking gender stereotypes and they undertook a public campaign in the popular 1090 Chowk in Lucknow.

The ground action proved a major success. Tripathi led sessions on gender at Christian College, Lucknow. He also worked on the public event at 1090 Chowk. He is today unafraid to speak his mind. Tripathi realises all that was wrong in his upbringing. His most significant recognition is that young boys should have the space to talk about their concerns regarding gender, masculinity and sexuality.  He also feels strongly about “eve teasing” and sexual harassment. He now believes that if he can change the lives of 10-20 people, he will have done his bit for society.

Imtiyaz Ahmad (name changed to protect his identity) comes from a family engaged in manual labour. Encouraged to study by his illiterate mother, he was very inhibited. He believed that housework was the domain of girls and they should be selective about what they wear. After attending Mardon Waali Baat training, he talks to girls on an equal footing and helps his mother with housework. He is supportive of his sister even as his family exerts pressure on her to get married. Now he wants to change the mindset of his brothers.

After the first phase of the Mardon Waali Baat programme was completed in September 2016, the second cycle ran from October 2016 to September 2017. “In the second cycle 23 leaders reached out to 1,200 other young leaders in 2017. Even though the Asia Foundation that supported both the cycles no longer extends support, the young leaders continue to visit colleges and shelter homes regularly to channelise the discussions they have started as their action projects towards the bigger goal of the programme,” says Pandey.

Meanwhile, on its part, the YP Foundation is now undertaking extensive research on masculinities and young men’s major concerns around gender, sexuality and relationships.

The YP Foundation adopts a similar approach to its other programmes that run in Uttar Pradesh, Rajasthan, Bihar and Delhi. Whether it is adolescent and youth sexual and reproductive health and rights, improving life skills among children and youth, promoting mental health or comprehensive sexuality education, the aim is to effectively train a pool of well-informed young leaders with a deep understanding of such issues.

“Our push as an organisation is that young people should become advocates and stakeholders who can effectively dialogue with government functionaries, policymakers and NGOs on government policies and programmes developed for adolescents and youth,” says Matiyani.

Among the YP Foundation’s  newer programmes is the  Udaan  project. Supported by the Children’s Investment Fund Foundation, the YP Foundation partners with IPE Global, Manjari and Quicksand for the Udaan Project that aims to reduce the adolescent fertility rate and adolescent pregnancy in Dholpur, Rajasthan.

The Udaan project will use the Human-Centred Design approach, pioneered by US-based IDEO.org, which basically starts with the targeted user and ends with new solutions designed to suit their needs. Constant feedback from the field followed by intensive tests of as many ideas as possible are needed before the programme finally rolls out as a pilot for a year between 2018 and 2019.

The YP Foundation is the technical expert in the Udaan project. It will work to “improve knowledge and practices of sexual and reproductive health among unmarried adolescents,” says Rhea Chawla, coordinator, research and advocacy. Now in the midst of the ideation phase, among the strategies being tested are forum theatre, sports engagements, adolescent-friendly education material, film screening, strengthening government-run Ujala clinics, and greater community outreach.

“The adolescents are now very comfortable after the focus group discussions. They have come up and asked questions that they never asked anyone. They talk about their sexual experiences and their discomfort in talking about their problems with their friends. Based on the discussions, they want information. Girls, in particular, are hungry for information because they lack agency so the amount of doubt is much higher,” says Harsh Chauhan, programme associate with the foundation.

The long-term goal of the Udaan project is that the evidence collated during the pilot phase will serve as a means of advocacy with the government of Rajasthan and find a place in the Rajasthan Rashtriya Kishor Swasthya Karyakram strategy for adolescent sexual and reproductive health.