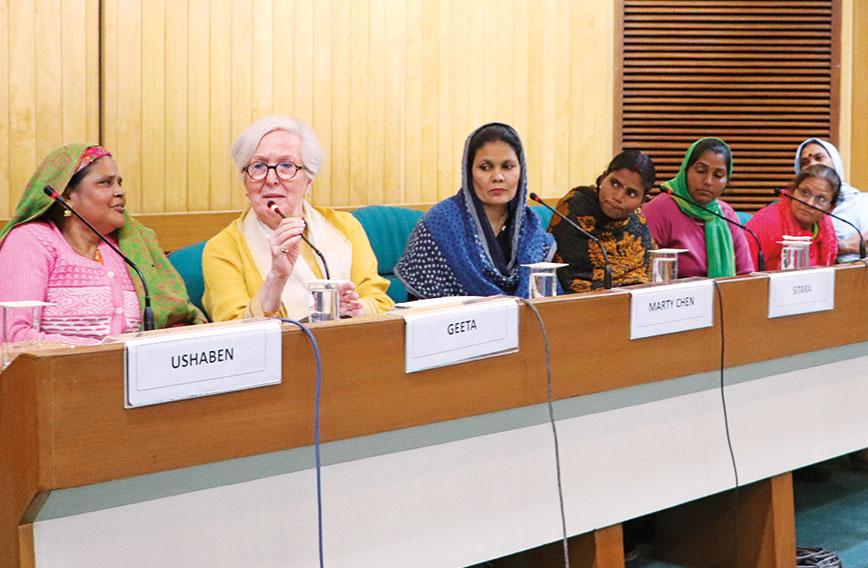 'My life changed after I joined the SEWA Union'

A panel discussion on March 7 at the India Habitat Centre in Delhi gave women from the informal sector a space to share narratives of their lives and express solidarity. Organised by the Indian wing of the global network, Women in Informal Employment: Globalising and Organising (WIEGO), the women worked in diverse occupations: as home-based workers, street vendors, construction workers, domestic workers and waste-pickers.

Informal workers account for over 90 percent of the country’s workforce and half its GDP. Yet their contributions are not valued nor do their daily struggles for survival cause enough concern. They are stigmatised and harassed by authorities, while laws meant for their protection often go unimplemented. It is unions of women and collectivisation that is helping women find a voice and fight for their rights.

Savita, a home-based worker, gave a graphic account of her battle for survival in Savda Ghevra, a desolate resettlement colony on the Delhi-Haryana border. The family was forcibly relocated overnight from Paharganj to Savda in 2006 in the run-up to the Commonwealth Games. “Savda was a dense jungle and you could hardly see a soul for miles. There were no amenities like water, electricity or toilets. My five children were very small and my youngest daughter was merely eight months old. With only a tarpaulin for cover, the fear of wild animals would keep us awake all night,” she recalled. Later, with a Rs 7,000 loan at a hefty 10-15 percent rate of interest, the family finally built a tiny jhuggi. “When the children should have had good food, they had no food at all,” she recalled.

At Savda, she and her husband, an electrician, toiled in the fields as agricultural labourers. Between them they earned Rs 100 to Rs 150 a day. She would go to the fields with her eight-month-old daughter and two-and-a-half years old son in tow. Water was scarce. When the water tanker would arrive, fights would break out in the community and the police had to intervene.

She and her children now supplement the family’s small income by stringing bead necklaces. But that adds just a little to the family kitty as she manages to earn merely Rs 100 a day. There are other worries. She has loans to repay. She has pawned her meagre jewellery and may never see it again.

Thankfully, the Mahila Housing Sewa Trust came to Savda in 2008. Savita’s husband has become a construction worker. Her work in the fields gets her enough flour for the household. She has taken a loan from the trust for a water pump, built a toilet and has a pucca house. The trust has also created awareness among the residents of Savda so that they  can put pressure on the municipal and government authorities for rights like sanitation, water and drainage. Savita is now a block representative of the Mahila Mandal and residents collectively approach municipal authorities to press for their demands. Her four daughters are being educated — one is doing a course in fashion design. Her 14-year-old son goes to a government boarding school in Ishapur village near Najafgarh. But livelihood is still a worry. “Livelihood is very important, without a livelihood I have nothing,” she says.

The need for collective strength is crucial, said the women at the event. However, policies meant for the informal sector are not implemented. “Women have fought for positive regulations for street vendors and waste-pickers. But they continue to fight for implementation of these laws. Funds meant for workers just sit there with the Welfare Boards and informal worker organisations need to press on,” said Marty Chen, co-founder and senior adviser to WIEGO,  who moderated the discussion.

Street vendor Ushaben is vocal about the urgency for collectivisation. She was one of the vendors driven out from the Red Fort vicinity during a beautification drive by the government. Her husband was unemployed. She had a visually impaired and mentally challenged child to bring up. Driven from pillar to post, life changed after she became a worker with the Delhi branch of the Self Employed Women’s Association (SEWA), a cooperative of poor, self-employed women workers.

That has given Usha new strength. Fifteen to 20 years ago street vendors would drop their wares as soon as they saw the police or municipal authorities approach, she says. With organisational backing and the Street Vendors (Protection of Livelihood and Regulation of Street Vending) Act, 2014, the result of years of advocacy by NGOs, SEWA members are unafraid to go to the police if they face harassment, she says. Along with her work at SEWA she now plies her trade on Sundays at SEWA’s Mahila Bazaar near Minto Road.

“My life has changed since I joined SEWA. I have passed Class 10 and intend to finish Class 12.  Now I am a board member of SEWA’s trade union. I mobilise women workers, try to learn a little English and in 2018 I went to South Africa,” she says with pride. But there is a long haul ahead as the Act for street vendors is not always implemented. “Vendors still have to struggle to make a decent livelihood. Their wares are confiscated and they sometimes have to pay bribes,” she says.

Hirawati, a community worker from Jagori, Jagruti Devi, a waste segregator, Guruvari Bai, a construction worker, Geeta, a domestic worker, and Sitara, a home-based worker, related personal stories of struggle and empowerment. Though they are members of organisations, they were unanimous that the government needs to be far more responsive to poor workers. Jagruti is concerned that she has to make repeated rounds of government offices for her pension, while education, livelihood, and better implementation of laws meant for their welfare count a great deal for the others.

Meanwhile, there are major concerns. Chen expresses trepidation over the new Labour Codes. In late 2014, the Indian government started the process of merging around 40 old labour laws into four larger labour codes — wages, industrial  relations, social security and welfare, and occupational safety, health and working conditions. While simplification of existing labour laws seems good on paper, Chen is unsure of the direction this rationalisation will take for the informal workers. “We don’t know how much will be diluted and how much will be strengthened,” she says.