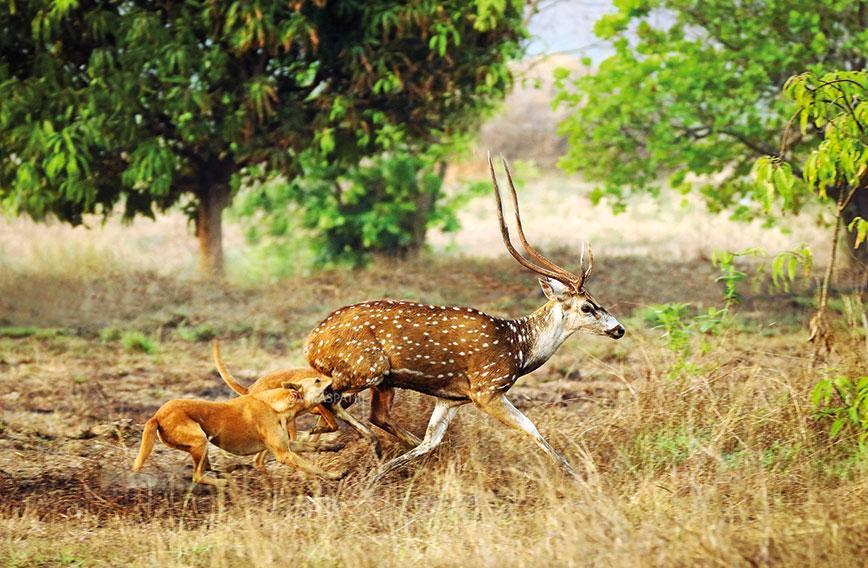 Wildlife is attacked by roving dogs in sanctuaries

OVER the last decade much has been written about India being the stray dog and rabies capital of the world. The free-roaming dog population in India was estimated to be an astounding 60 million dogs in 2014 and there are now daily reports of stray dog attacks on citizens. However, what has largely gone unreported and even ignored is another unwitting victim of the country’s free-roaming dog population —wildlife. What is being reported is only the tip of the iceberg as attacks are documented almost entirely by chance by wildlife photographers and tourists.

An Invasive Alien Species (IAS) is a species non-native to any ecosystem that causes harm to wildlife or human interests. An IAS threatens biodiversity, causing decline or extinction of native species through competition, predation and diseases. The IUCN includes domestic dogs as IAS and have declared such species to be the second greatest threat to wildlife globally after habitat loss. Free-roaming dogs have contributed to the extinction of as many as 11 vertebrates. Of about 200 species said to be threatened by free-roaming dogs, 30 are classed as critically endangered, 71 endangered and 87 vulnerable in the IUCN Red List of at-risk species.

A large number of Protected Areas in India are now overrun by free-roaming dogs that are involved in direct predation of adults and juveniles, plundering of nests, competing for prey, hybridization and transmission of diseases. Free-roaming dogs now threaten numerous Schedule species of wildlife, including snow leopards, the iconic black-necked crane, the critically endangered Great Indian Bustard, Asiatic lions (a species not found anywhere else on earth), blackbuck and numerous other species.

“Because of their instinctive nature, dogs will still form packs, and chase animals, either for food, or for fun. Such encounters can have potentially deadly effects on wildlife, either through direct killing, or by constant harassment and stress,” says Abi T. Vanak, conservation scientist at ATREE (Ashoka Trust for Research in Ecology and the Environment), Bengaluru, who studies the impact of free-ranging dogs.

A 2017 research project conducted by ATREE titled “Canine Conundrum: Domestic dogs as an invasive species and their impacts on wildlife in India” was the first sub-continental-scale assessment of the impacts of dogs on native species in India. The research revealed 80 species of wildlife have been attacked by domestic dogs, out of which 31 are listed as ‘threatened’ on the IUCN Red list, including four critically endangered species.

A recent survey of stray dogs published in the Journal of Threatened Taxa 2019, in and around Ranthambore National Park, showed 86 percent of surveyed dogs having distemper antibodies in their blood, indicating the probability of the dogs acting as a reservoir for the deadly disease, fatal to tigers. A 2018 Tiger Task Force report revealed that in 17 out of 35 Tiger Reserves in India, camera traps showed more dogs than tigers. The National Tiger Conservation Authority (NTCA) admitted that “dogs are a threat to both ungulates (which they hunt) and to carnivores, since they carry infectious diseases like rabies”.

How did we get here? The 2001 Animal Birth Control Rules of the Ministry of Culture (a ministry that has nothing to do with animal control) forces authorities to release unowned dogs back wherever they were collected from, regardless of whether they’ve bitten, attacked or even killed a citizen or animal. The ABC Rules prohibit the removal and euthanizing of unowned dogs, a strategy used successfully as part of animal management the world over and which is in accordance with Municipal Acts and the Prevention of Cruelty to Animals Act in India.

Inexplicably, the Ministry of Environment and Forests has abandoned its mandate under the WPA and allowed the same ABC Rules to be implemented in areas with wildlife, despite ABC Rules having failed to protect people or reduce the dog population over 20 years. Sterilization does not prevent dogs from hunting and killing wildlife and is a massive expense to the exchequer for no gains whatsoever.

Thus, despite the almost draconian Wildlife Protection Act, that defines ‘hunting’ as even chasing wildlife, the policy governing the management of dogs, including those that hunt wildlife, falls short profoundly. Today, a tribal can be jailed for poaching a deer whereas an unowned dog is vaccinated and released for the same offence as per even NTCA guidelines, in a likely healthier state to continue depredations.

‘Canis lupus familiaris’ translates to ‘dog of the household’ and are a species meant to be owned. Loyal and affectionate, dogs are highly popular pets worldwide. However, as free-roaming animals, not under human supervision and control, they pose a serious danger to people, livestock and wildlife via direct predation, diseases, faecal contamination, accidents, noise pollution and attacks. Globally dogs in unowned contexts are removed and then sheltered, adopted or euthanized.

All the benefits that dogs bring as companion animals are undone by forcing them to be homeless, coming into conflict with and attacking people and other animals. Unowned dogs themselves suffer terribly, at the mercy of the elements, diseases, accidents and retaliatory attacks. The continuation of the unscientific and ineffective ABC policy is a disaster for both people and animals.