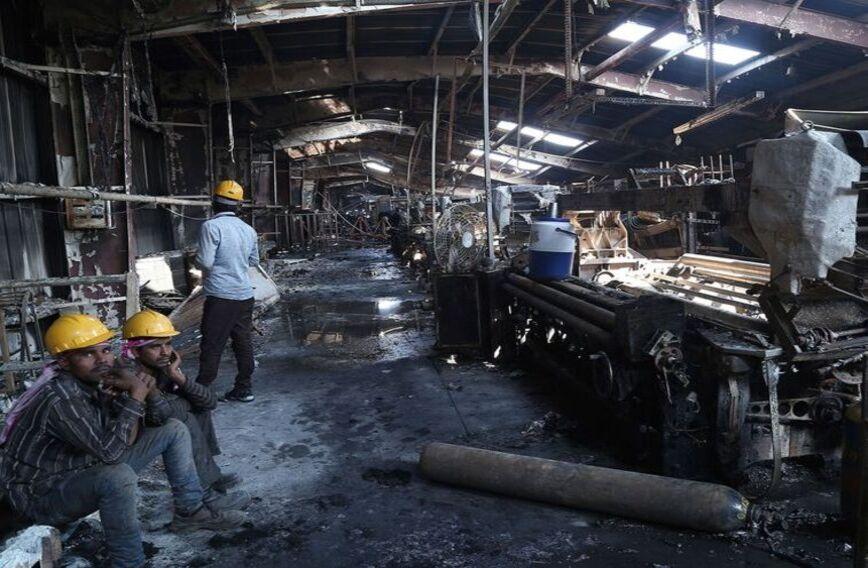 When a fire broke out at the Nandan denim factory in Narol, a major textile hub in Ahmedabad in Gujarat, seven workers died of burns and asphyxiation. The fire started in the factory’s shirting division on the roof and quickly engulfed the building.

Workers found it difficult to exit the factory premises because there was only one door on the top floor accessible by a ladder. There weren’t the emergency water sources to douse the flames either.

No action was taken against the factory owners, the families of the victims were paid handsome compensation and, seven months later, another fire broke out.

How prepared is India to meet global shopfloor standards as it gets ready to make a quick leap in garment and textile manufacturing?

Production has been shifting away from China. The government has also pledged production-linked incentives to the textile industry in anticipation of economic gains. It is expected that more jobs will be created.

But much remains to be done to reap the benefits of this global opportunity. High on the list is adherence to international labour norms and workplace conditions related to safety so that the sector earns a good reputation.

Aajeevika Bureau, which represents migrant and informal workers, has highlighted unsafe working conditions in Narol factories in a report recently published by the non-profit.

Narol, it appears, is far from being up to scratch. This industrial cluster has 2,000 units out of which 35 are large factories. The rest are small and medium units that undertake specialized tasks like dyeing, chemical washing, stitching and weaving for each other or for larger factories. These jobs are  sub-contracted or outsourced.

Mostly, male migrant workers are hired on contract on daily wages or on a piece rate basis. They use hazardous substances and processes without protective equipment or training resulting in injuries and fatalities. But it’s difficult to pinpoint blame because large factories and smaller units downstream are intertwined in a maze of contractual arrangements.

To understand labour practices that cause fire accidents in Narol,  Aajeevika Bureau and the  Karkhana Shramik Suraksha Sangh (KSS), a local group, undertook a study of large processing factories focusing on factory floor realities and seeing safety though the eyes of workers.

The survey focused on workers employed in large factories run by registered companies since those fall under the organized sector and are expected to have a higher level of compliance with the  provisions of the Factory Act 1948 and the Gujarat Factories Rules 1963.

Around 95 factory workers were surveyed between December 28, 2020 and January 6, 2021. Most of the workers were engaged in processing. Packing, maintenance and housekeeping workers were under-represented. The surveyed workers were male between 19-60 years of age. Around 67 percent were between 18 and 35.

Only four percent of workers were on the factory payroll. They were on a higher grade employed as supervisors, masters and maintenance staff. The rest 96 percent were recruited by contractors and paid cash or on a piece rate basis. Factories were careful not to employ more than 20 workers on the payroll to avoid coming under the CLA (Contract Labour (Regulation and Abolition Act).

Seventy-one percent of workers had been employed in the same factory for over a year in perennial and core activities. Among them,  83 percent did not have social security cover and many lacked adequate shelter or access to basic facilities at their workplace. Almost 98 percent reported working in 12-hour shifts, with no overtime compensation and unpredictable timings. Only 17 percent of workers reported provident fund or ESI deductions.

Factories were housed in fabricated sheds resulting in temperatures being higher inside than outside. Machines, operating at high speed, emitted more heat. In summer, the heat inside became unbearable because there wasn’t proper ventilation. All workers complained of the intense heat despite fans and exhaust fans in 88 percent and 50 percent of factories.

Ninety-six percent of the workers surveyed said the factory was thick with fabric dust and fumes. Ninety-seven percent said they came into regular contact with harsh chemicals that caused burns and irritation to skin, eyes, nose and throat. And 88 workers reported having to work next to extremely noisy machines.

Workers reported that live wires ran freely across their factory premises. Electrical apparatus was carelessly maintained. The air was thick with fabric dust. Hazardous chemicals and cloth were strewn around. Wires, electrical panels and light-fittings were covered with dust. Livewires and broken switches, static charges and surface heat generated by machines made the factory into a very serious fire hazard.

Factories had fire extinguishers but they were not routinely serviced or checked. Fire hydrants and automatic sprinklers, critical for dousing fires, were absent.

Of the workers surveyed, 44 percent said the factories they worked in were crammed with cloth rolls, chemical containers in passages and in front of exits. There were lorries loaded with raw material, parked at the exits.

Haphazard stocking and piling of finished materials, was widespread — the feedback from between 80 and 90 percent of the workers. Similarly, chemical container drums were reported to be lying around machines, in corridors and at doorways.

Eighty-two percent of workers said it would take them between 30 to 60 minutes to escape from their work station and reach outside in case a fire happened. The majority said they had access to only two exits shared by around 250 workers.

No training was given in escaping accidents and there were no evacuation protocols, said 98 percent of the workers. And 95  percent said there weren’t any fire alarms, which are usually the only means of alerting and triggering evacuations in case of emergencies.

Lastly, majority of workers reported not having any protective equipment. Workers were subjected on a daily basis to burns and injuries, and the possibility of lung diseases due to prolonged exposure to the dust.

The report points out that workers find themselves in a constant trade-off between making a living and safeguarding their health. They also don’t have a voice and fear losing the little they earn if they speak up for their rights.