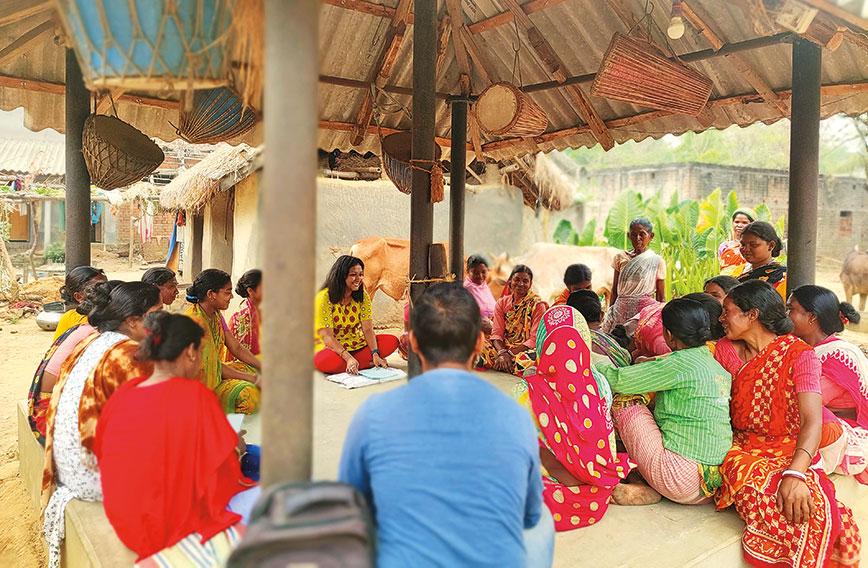 AN obscure tribal village in West Bengal where seasonal migration has been the norm has seen household incomes increase as much as three times in five years with improved paddy and vegetable cultivation and fish-rearing.

The increase in incomes follows measures for water conservation and better methods of cultivation brought in by PRADAN, an NGO, which has been working with the villagers.

Dakshinkendbana is a Santhal village in  the Indupur block of Bankura district. It has 26 households with 111 individuals.The local economy depends on agriculture, livestock and wages. The total land under farming is 56 acres. The average annual household income was a paltry Rs 36,000. To supplement their income, villagers worked as farm labour and construction workers.

The village had only one tubewell which was used for drinking water and household chores. For bathing, washing clothes or taking their cattle for a dip, villagers travelled four km to get to a water source.

The Indupur block suffers from a shortage of water. The average rainfall is 1,200 mm. Villagers cultivated paddy during the monsoon and a few farmers grew vegetables on their homesteads. Lack of income compelled them to migrate seasonally for work as labourers.  The rest of the year they worked on other people’s farms for meagre wages.

In 2016, PRADAN’s team started working with the village to boost its income. They began by organizing women into Self-Help Groups (SHGs). They were taken to visit the SHG federation in Purulia to understand how they could collectively increase their income. PRADAN’s team held  meetings to inform villagers about cropping patterns and better agricultural practices.

The quality of upland soil in villages is usually unsuited for growing cash crops. The lowlands, on the other hand, have fertile soil. After assessing Dakshinkendbana’s soil, PRADAN decided to introduce Direct Seeded Rice (DSR), a method by which seeds are sown directly into the soil instead of transplanting seedlings from the nursery.

Twenty-two farmers opted for DSR that year. Earlier, an acre would yield around five quintals of paddy. With the DSR method, an acre yielded 9.5 quintals on average. This jump in production was still lower than Bankura’s standard production which was 10.71 quintals per acre.

The villagers were not disappointed. They said that since DSR allows direct seed sowing, they saved transplanting time which helped them work as labour on other people’s farms.  Also, due to early harvesting, their lands had residual moisture which helped them take up mustard cultivation in winter.

The moot point for PRADAN was that paddy cultivation was not generating enough income. So, to make agriculture more remunerative, PRADAN turned to vegetables. But water for vegetable cultivation was a hurdle. They noted that demand for cucumber rose during religious festivals like Vishwakarma Puja and Durga Puja. They calculated that cucumber cultivation using trellises during the monsoon would yield six tonnes from every acre. In 2019, 12 farmers made an attempt to grow cucumber. Since production wasn’t in bulk, farmers sold the cucumbers locally. They earned 5,500 each on average.

PRADAN realized that lack of irrigation was proving to be a serious hurdle to lucrative farming. A  plan was drawn up to dig ponds for harvesting rainwater. In 2019, the first pond was excavated on 2.13 acres and two more were dug in 2022, with the support of the West Bengal Accelerated Development of Minor Irrigation Project (WBADMIP). Five ponds and 11 borewells were made under the rural employment guarantee scheme.

These ponds became a lifeline for the village. The availability of water inspired farmers to collectively cultivate vegetables for large-scale profit. In the 2020 monsoon season, 18 farmers grew cucumber on trellises on 3.64 acres. After their cucumber was harvested, they grew flat beans on the same trellis in winter. PRADAN supported them with technical know-how. This time, the average income went up to Rs 8,000 per farmer.

PRADAN motivated farmers to experiment with improved cropping patterns. Seven farmers decided to grow watermelon in January 2021. But they couldn’t afford the input cost of Rs 6,000. Here, the SHG came to their rescue and gave them a loan of Rs 18,000. As the watermelons started growing, market vendors visited their farms. The farmers were paid market rates and earned an average of Rs 11,000 that year from watermelons.

In 2022, 13 new farmers joined the watermelon brigade. They earned an additional income of Rs 16,786 each. The farmers also formed a Farmer Producer Company (FPC) with PRADAN’s help.

“As members of an FPC, we were able to develop marketing channels with Sufal Bangla, an initiative of the government of West Bengal, to ensure doorstep delivery of fresh vegetables. We could sell our watermelons at government-mandated fair price rates,” says Adari Munda, a local farmer.

Irrigation had another salutary effect. It led to diversification of livelihoods. Since Bankura ranked first in pisciculture in West Bengal, PRADAN floated the idea of using the ponds for fish cultivation. The villagers were keen.  They were taken on orientation visits to Ramsagar, a village well known for fish-rearing.

A group was formed for pisciculture. Fingerlings were released into the ponds. The cost of fish feed was supported by the WBADMIP. By selling various species of fish, within a few months, the farmers earned Rs 144,100, with a working capital of 11,400. Today, they have increased their vegetable cropping area. They have purchased a water pump to regulate water flow judiciously.

“PRADAN helped us increase our livelihood every year. I earned Rs 218,000 from watermelons and Rs 28,000 from other crops in the past two seasons. I could enrol my child in a good school. I expect every household in our village to earn Rs 1,00,000 every year,” says Ujjwala Tudu, a woman farmer of Dakshinkendbana.