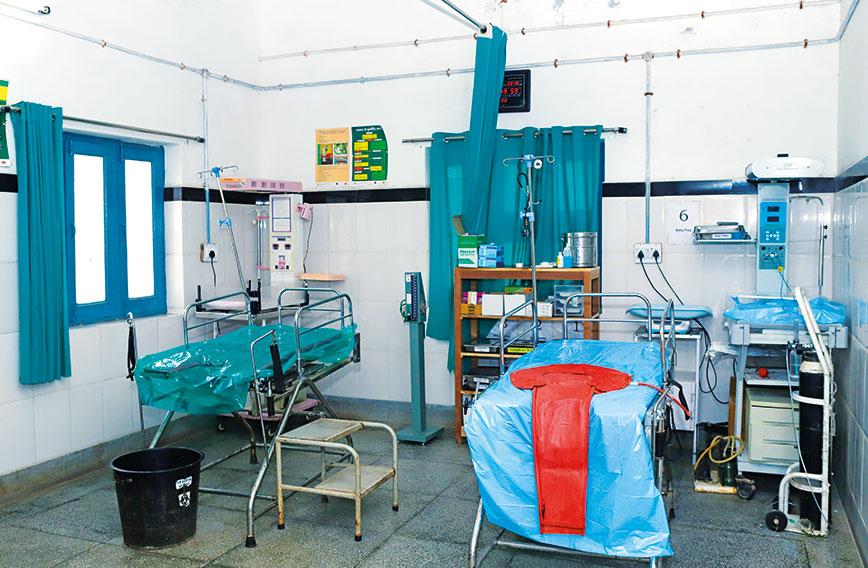 A remote PHC's labour room, like this one in Barmer district, can be as good as any in a private city hospital

THE RIGHT DOCTORS FOR ACCESSIBLE HEALTHCARE

THE crisis in our lives caused by the coronavirus pandemic has made most of us realize the importance of having a robust and well-structured public healthcare system. It is clear that in a country as large as ours it should be a system owned and run by the government. We know from experience that excessive dependence on privatized care won’t do, for all the expertise and excellence in standards that might be on offer.

At the core of a healthcare system are doctors. Outcomes are dependent on how they perform.They should have clear objectives and feel at ease and secure in their clinics and wards. To that end, continuing investments are required in infrastructure and management systems.

But it is not enough to have a funded and functioning system. It is also essential for doctors to have high levels of motivation and the spirit of service. They should be imbued with the ethical values of their profession and feel ready to go beyond the call of duty. If productive work environments matter, so do these attributes. Doctors are more than their degrees and the facilities they work in.

Commitment and an emotional quotient are important.Tens of millions of poor and uneducated people, living in inhospitable conditions, make up diverse target populations that Indian doctors must be prepared to reach. Social inequity results in a huge asymmetry between doctor and patient. Dealing with this gap is as much a part of medical care as diagnoses and medicines.

Encouraging doctors to be inclusive and use their knowledge and power for doing good should therefore be a priority if they are to be effective where they are needed most. It has long been a national concern to get doctors to go to villages. They go when they are compelled to do so. But they really make a difference when they take on rural assignments with an innate sense of public spiritedness and a belief in their role in the process of nation-building.

Medical education plays an important part in inculcating social awareness. Doctors who come out of the Christian Medical College, Vellore, and other such hallowed institutions tend to be better connected to Indian realities. We have found that exposure to poverty and doctors to look up to are a big influence during student years.

Government policies are also important for taking healthcare in directions that work best for the country. Policies help young doctors make choices. For instance, there is a strong case for shifting the emphasis to basic and family medicine from those specializations that become primarily attractive for commercial reasons.

In Civil Society, over the years, our coverage of public healthcare has been largely about the government system and the voluntary sector. We have found idealistic doctors and activists trying and often succeeding in providing medical services against great odds. We have reported on them because what they do is so relevant and inspiring. Maybe other doctors would get motivated by learning about them. Their examples also serve to change the general impression that doctors are only after fat fees. Perhaps young readers in colleges and schools will change the way they think about the medical profession after our stories.

In this spirit we have dedicated this year’s Civil Society Hall of Fame to healthcare. So far, entrants to the Hall of Fame have come from all walks of life. But this year there are six doctors chosen, from among the many more we know, for their extraordinary commitment to serving people and strengthening their profession by personal example.

These doctors have excellent degrees, but they choose to work in remote corners of the country for small salaries and sometimes no money at all. In addition to advanced medical skills, they have in common strong leadership qualities. They are driven by compassion and a sense of service. They dedicate themselves to treating the disempowered and the poor who need them the most.

Dr Koshy, 38, is from Kerala, has an MD from the Christian Medical College in Vellore, spent a year in Jharkhand and is now at the Makunda Hospital in a remote corner of Assam’s Karimganj district, where she has committed to stay for 10 years.

Dr Suresh Kumar, 57, has a fascinating story to tell of turning the LNJP Hospital in New Delhi into a successful COVID-19 facility in record time during the pandemic.

Dr Vinod Shah, 74, is a paediatric surgeon, also from CMC, Vellore, who spent long years running a small hospital in tribal areas on the border of Gujarat and Rajasthan. He then did an administrator’s job and finally returned to Vellore to design and successfully launch a distance learning course, the only one of its kind in India,  to turn government general medicine practitioners into specialized family physicians.

Dr Taru Jindal, 39, is a gynaecologist who got her degrees in Pune and Mumbai. Just when she could have embarked on a fulfilling and lucrative career, she chose instead to go to Motihari in Bihar, to train doctors at a district hospital. She then went on to help set up a health centre in the village of Masarhi.

The Ramasamys have successfully demonstrated how primary healthcare services should be provided. Rajkumar, 66, has a specialization in general medicine from Cambridge and is a Fellow of the Royal College of Physicians. Mary, 65, is a gynaecologist trained at CMC, Vellore. But for 20 years they have run the KC Patty CF Primary Health Centre in the tiny village of KC Patty, some 50 km from Kodaikanal in Tamil Nadu. Before that they spent about the same number of years working at the Christian Fellowship Hospital at Oddanchatram. Theirs has been a lifetime of service.

The rules for the Hall of Fame are that you can’t apply and you can’t want to be famous. You have to be identified for the work you do. Civil Society has completed 17 years and the Hall of Fame is 11 years old. It is a device for citizens to celebrate the good work of other citizens. It is an opportunity to say thank you!

Our partner in this happy effort from the very beginning has been the Azim Premji Foundation. It has been a wonderful partnership in which Civil Society takes the lead.

In all previous years we have travelled the length and breadth of the country to spend time with the final entrants to the Hall of Fame and document their work through pictures and reportage. With the pandemic, that hasn’t been entirely possible. So, instead, we have relied on detailed interviews, which have their own kind of value.

We have in the past also brought the new entrants to Delhi to celebrate their work at a public function at the Habitat Centre. A recognition ceremony has been followed by the Everyone Is Someone Concert at which Indian Ocean has performed. Sadly, none of this will happen this year. We can at best hope to do something online.

Taken together, the entrants to the Hall of Fame over the years make an interesting collection of people who are genuine change leaders working far from the limelight. Celebrating them nationally and bringing them to Delhi, as we have done in the past, is belated recognition of their contribution to building a better India.

This year is not the first time that doctors have been in the Hall of Fame. We have had several from all over the country. The difference now is that we have six together. In the past we have had doctors young and old, general physicians and specialists, activists and those working for the government. They have all been innovators and used whatever resources they could find to their advantage. They have built productive partnerships and connected beneficially with communities. Without exception they have set their own standards for themselves and in doing so have raised the bar for others. They have pursued their dreams and gone over and above the call of duty.

Many of the facilities we have seen have been so well-equipped and managed that they could have been in big cities in the private sector and not in the far-flung locations where we found them. While looking for a picture for this opening piece we rummaged through our archives and came up with the picture of the delivery room at the PHC the young Dr Jogesh Kumar used to run in Barmer district in Rajasthan. The picture of that delivery room is used. It has everything including a clock because the time of birth is important.