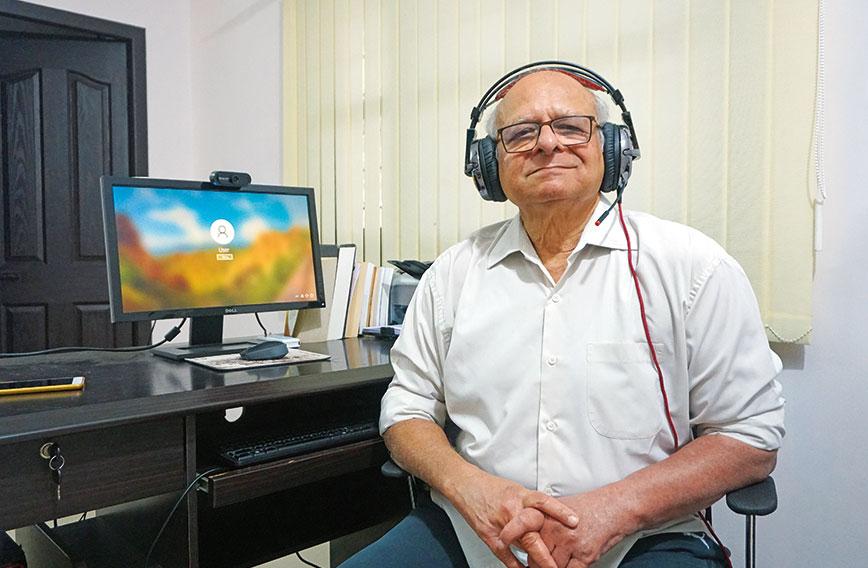 Dr Vinod Shah: ‘I wanted to convert general physicians in the government into family physicians’

FOR a health system to work well it has to be embedded in the community. The family physician has an important role to play because of the rapport with patients. Most ailments can get resolved at this first stage without having to go to specialists.

Dr Vinod Shah, 74, spent a good part of his career working as a paediatric surgeon in the tribal areas of Rajasthan and Maharashtra. He then served as the Medical Director and than CEO of Emmanuel Hospitals and was based in Delhi.

Eager to reinvent himself, he returned to the Christian Medical College, Vellore to set up India’s first long-distance medical education programme to empower government general physicians and turn them into full-fledged family physicians. State governments have signed up and family physicians in large numbers have been trained. Family medicine has come to be accepted as a specialty in much the way it is in the developed world.

Q You started a seminal distance education programme for doctors in government hospitals. Where did this idea originate from?

The private sector can’t be expected to meet the entire healthcare needs of India. The government is needed, but there is dissatisfaction with its services. I wanted to help government doctors build their capacity.

Q Did your idea find acceptance?

I talked to the principal of Christian Medical College in Vellore. I asked if he could re-employ me. He said I was welcome but would have to start on the bottom rung since I hadn’t been in academia and had worked in peripheral institutions. But I was welcome.

I asked him if he could give me time to develop a new department, the Distance Education Department. “What is that?” he asked. I said I wanted to attempt to train doctors in primary health in family medicine. He spoke to the director. They said I could work part-time in paediatric surgery and they would give me time off to do what I wanted to do. But they didn’t have the money to finance my idea.

Q And what did you develop?

Have you heard of family medicine? In Europe, Britain and Australia you go to your family medicine doctor if you have a health problem. He will try to resolve it. Or he may say, I think you need an MRI, and if there is a problem, I will refer you to a neurologist.

So, you have a gatekeeper who takes full responsibility for the patient. He has all your records and knows your medical history till you die. He is your family physician. What this does is to reduce costs and prevent misuse of technology.

The family physician in the UK or Europe is the patient’s advocate. He makes sure you go to the right person if needed. He takes responsibility for your health.

In India you go to a doctor with a health problem and he says he thinks your uterus needs to be removed. You don’t know whether he merely wants to make money by operating on you. So, you go to another doctor for an opinion. He might refer you to an endocrinology consultant, who may send you to a cardiologist.

It goes on and on and you lose a lot of money because you get referred maybe four or five times. Nobody takes responsibility for you.

Q Is that what your distance learning programme does? It strengthens the family physician?

I presented this model to our director. My motto was ‘refer less, resolve more’. Don’t refer patients, try and resolve their issues at your doorstep and reduce costs for the patient. The training would be a two-year programme.

Q What were your priorities for the distance learning programme to achieve this goal?

Medicine has breadth and depth. The family physician has breadth. They know a lot about common problems, but they don’t know much in depth. I had to choose a curriculum which comprised common things and left out the uncommon things. I worked that out with specialists in the institution.

Q What is a common thing?

For example, a person comes to the clinic with a headache. Common causes are migraine and sinusitis. Then there is the tension headache, psychosomatic or psychological or because of stress. If a family physician can manage these three, he has managed 80 percent of all headaches. He has prevented the person from going to the neurologist who will definitely order a CT scan and an MRI. You have prevented the patient from taking these tests and treated his problem.

The family physician doesn’t need to know all about brain tumours that cause headaches, or complicated things about aneurysms or bleeding in the brain because they are rare. He needs to know about common conditions.

Q One presumes that this means also telling the family physician when he should act urgently. Because a headache could have a serious cause as well?

Yes, now there are what we call ‘red flags’ which means they should not waste time. They have to refer immediately. For example, if a patient comes with severe neck pain and neck rigidity and if his pulse rate is very high and he has a severe headache that means that he is having subarachnoid haemorrhage due to hypertension. He needs to be sent at once in an ambulance to a big hospital or the medical college hospital.

Every chapter has red flags. The family physician doesn’t go into depth. He will immediately refer the patient. He won’t waste time. When the patient goes through the emergency department in a medical college, they will immediately take him in, do an MRI and inform the neurosurgeon who may operate on him. So, the family physician is able to refer quickly and prevent unnecessary trips to the medical college by resolving common conditions. At the same time, he doesn’t risk the patient’s life by hanging on to him in an emergency situation.

Q That means you have to be careful in preparing the curriculum material and in the way you teach.

You are dealing with doctors who are 35 or 45 years old and set in their ways. This is adult education and its education principles have to be very different.

At that age they will not have the inclination to read a densely printed textbook like many of our medical textbooks. We have to create material that is very user-friendly. That means lots of pictures, cutouts, tables, designs, boxes, arrows, catchy quotes and white space.

I suddenly discovered a gift I had not realized I had for 55 years. I had never prepared curriculum material. I was a surgeon who operated. When I had to sit down and design this curriculum, these skills just surfaced from within.

I began to draw, make tables, cutouts, simplify complex study material, write objectives and so on. I enjoyed doing it. I found myself working into the night. Normally, you stop working once your duty time is over if you don’t enjoy your work. But for three years, night and day, I was just preparing material.

Q For three years you worked as a paediatric surgeon and at the same time put this curriculum together?

I was asked to work half the time. I wasn’t sure about the outcome of my efforts or whether there was any scope at all in what I was doing. It was an experiment. At the end of one year, I completed one booklet. Other people saw it and said it was fantastic. They said I should design and write 15 booklets on 75 common problems. I then reduced my time in paediatric surgery and increased my time in designing this curriculum with the permission of the authorities.

Yes, it is a problem-based approach because this is how the doctor will see the patient. Normally, say a textbook of neurology will start with diseases of the brain, diseases of the meninges, the bone, metabolic diseases. It will not tell you what to do when a patient comes to you with epilepsy or fits because it is not a problem-based approach. It is a disease-based approach. But my booklet is different. It will start by mentioning convulsions in an adult patient. You start with the problem and then you try and elucidate how you will manage it.

Q How long has this course been on? When did you start it?

I started the course in 2006. I advertised it. I thought to myself that if there were no takers I would just go apologize to the director and then resign. Initially, there were just four or five applications. Then the next week, we got 100 applications. In three weeks, the figure rose to 500.We eventually got 700 to 800 applications from across the country, including Arunachal Pradesh, because I advertised in all the local newspapers.

Q How did you scale up the course?

I was waiting for an Air India flight in Chennai. It got cancelled  and rescheduled for the next day. I thought, let me use this time properly. I went to the health department and somehow managed to meet the health secretary. I told him about my project. He was fascinated. He said he would send 50 doctors from 50 PHCs to join the programme.

And then he took it to Delhi and showed it to the head of the National Rural Health Mission (NRHM). He asked me to do a presentation to all the health secretaries from all the states in Pondicherry where they were holding a meeting. After my presentation, eight health secretaries said they wanted to send their primary health centre doctors for training.

That’s how we started working with government doctors. Each state would send 30 to 40 doctors each year for training. We were training about 200 doctors every year. We really enjoyed doing that because we knew we were making an impact in PHCs, which poor people approach for healthcare.

Q Are you training government doctors from every state?

The model has changed a bit. For example, the Chhattisgarh government wanted us to bring the whole team to the state and train their doctors there itself, in their medical college, batch by batch. “We will pay you for training all 1,000 doctors in the state,” they said.

Our partnership with the government has increased and the course has undergone a lot of modification. Animation and videos have increased because we have experts in technology. We now have a big educational technology unit which is part of the distance education unit. They have made the course even more interesting than it was before.

There is another important offshoot to this story. After about six years, the doctors we trained formed the Family Medicine Association of India. Members were our alumni. They lobbied with the government to introduce family medicine in India. Because of that the government has approved a three-year degree in family medicine. The Medical Council of India has approved an MD in Family Medicine.

I think our alumni made it happen. Some of them were so enthused and excited they became activists, lobbying with the government and always badgering the health secretary. Change happened, but it took a long time.

It is also amusing because I didn’t particularly like family medicine. I am a paediatric surgeon. I did it because it was really needed for the country. I also did it because I liked the mode of teaching and making modules and the pedagogy. But the subject was not something I would have loved to learn myself.