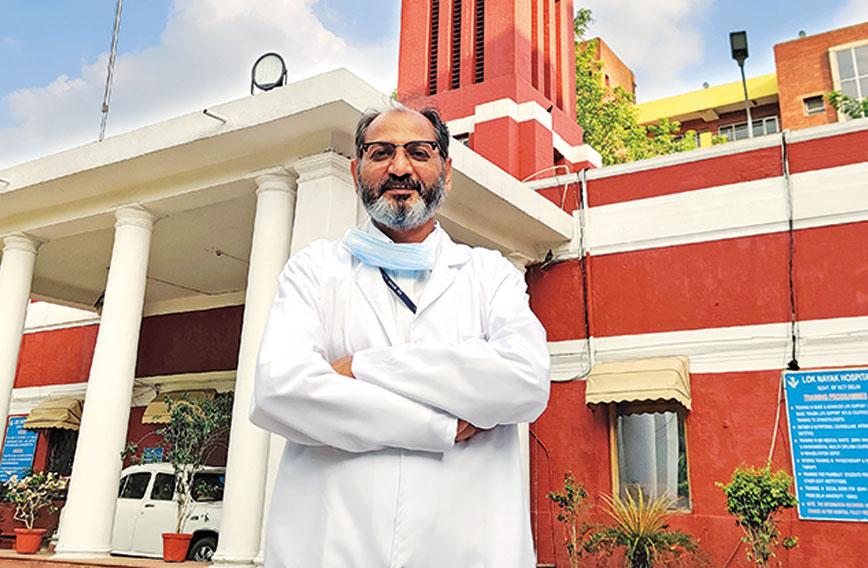 Dr Suresh Kumar outside the LNJP Hospital: ‘It took us 30 days of working day and night to expand our facilities’

HOSPITALS get built from scratch in record time in emergencies, it is known. But what about turning around an ageing and neglected government hospital in the middle of a pandemic? How difficult or easy is that? Ask Dr Suresh Kumar, 57, who led the transformation of the Lok Nayak Jai Prakash (LNJP) Hospital  in Delhi in a matter of weeks even as it was flooded with COVID-19 cases.

Dr Kumar went from being nodal officer of the special task force on COVID-19 to taking on the mantle of medical director of the LNJP Hospital. Earlier, he was teaching in Maulana Azad Medical College. Faced with the mounting demands of the pandemic, he intuitively led an effort that turned the LNJP Hospital into a state-of-the-art facility.

An unimpressive structure in central Delhi, LNJP was a typical government hospital, ramshackle and languid with no great forte in any field of medicine. As a flood of COVID-19 patients suddenly descended on the hospital, sleeker private hospitals having chosen to hunker down, doctors and nurses were in a state of sheer panic.

They needed better protocols, gear and infrastructure to deal with an unknown disease. Under Dr Kumar, the hospital has gone from just 330 beds to 2,000 and the ICU has been expanded from 50 beds to 300. New testing facilities have been added. Of the 10,000 patients the hospital has treated, the majority have survived. There have also been  successful deliveries of babies by mothers who had contracted COVID-19. It was a whole new addition to the activities at the hospital. A children's ward with recreation activities was also created.

Dr Kumar himself contracted COVID-19 and lost three members of his staff. He lived on the hospital premises for six months, never went home, and spent sleepless nights. He also became visibly thinner.

It helped that Dr Kumar was given a free hand by the Delhi government and all the authority to take decisions on the spot in the hospital to buy equipment, expand facilities and provide amenities to the doctors, nurses and other staff.

He also drew on the voluntary sector, bringing in Doctors For You (DFY) who almost overnight added beds, provided staff and set in motion hygiene services. The hospital learnt as it went from one day to the next. This was especially so in the treatment. Strategies were decided as the situation evolved. For instance, it was seen to be beneficial to give oxygen and steroids straightaway.

Now that cases of the novel coronavirus are at a historic low and people are being vaccinated, Dr Kumar looks back at that tumultuous time and how LNJP very quickly went through a transformation and became the most important hospital for COVID-19 in Delhi and its surrounding states.

Q You took over as medical director when the COVID-19 crisis was at its peak. Tell us your initial impression of the hospital.

In May 2020 coronavirus cases were rising and everybody was in panic mode. Doctors and nurses were wondering how they would manage patients, treat them or even touch them. The nurses were keeping a distance of five metres from patients. They feared for their own lives. This was the situation. Ours is a teaching hospital. We had to make sure we followed WHO guidelines.

We held a lot of brainstorming sessions in March itself when I was appointed nodal officer for COVID-19 at the hospital. We formed a Special Task Force (STF) on COVID-19. We held intense meetings with experts in microbiology, anaesthesia and internal medicine. We met for five to six hours for two or three days to adopt WHO guidelines and streamline them for our hospital since we had limited resources.

Our first problem was the shortage of PPE kits. It was also very hot, nearly 42 degrees Celsius, and medical staff had to wear them for eight hours.

Q How did you turn this situation around?

There were two or three decisions I emphasized. The first was that the patient should be taken care of at all costs. The nurse would see to all aspects of patient care and monitor blood pressure, pulse, respiration, oxygen saturation, etc. A doctor, a senior consultant, would at least visit the patients.

We created a full facility. We began with 300 beds and then added more. Initially, we had limited knowledge. We relied on oxygen and steroids. Both were given at the very beginning to patients in the casualty ward itself.

Patients were quickly categorized — those who could be treated at home were sent home, patients with symptoms or co-morbidities were kept in the ward and serious patients with  respiratory distress were sent to the ICU. The brief was to shift them from the ambulance to the ICU swiftly, within one hour. We stationed 200 doctors, 400 nurses, 300 cleaners and nursing orderlies in the ICU.

In fact, we put a lot of resources into the ICU. We had thousands of patients. Out of them 150 were really serious and we saved their lives.

In April, we had oxygen supply for just 55 beds in the ICU. I expanded it to 300 beds. The initial consumption was 30 tonnes of oxygen. It went up to 150 tonnes per month.

Later, we also got good drugs like remdesivir. We were the first hospital in north India to use it. We also started plasma therapy. These two things saved many lives.

Q Your hospital was the first to introduce plasma therapy.

Yes, we were the first in India. We have given plasma therapy to more than 500 patients. We also started the first plasma bank, initiated by our chief minister, Arvind Kejriwal. He was very supportive. We first did trials approved by ICMR (Indian Council of Medical Research) and DCGI (Drugs Controller General of India). Initially with 30 patients and then with 400 patients. After that anyone could come and access plasma if the patient had very low oxygen saturation. We had many poor patients here. People came from Haryana, Agra, Ghaziabad and Saharanpur to access the plasma bank. It became popular.

Q How long did it take to expand facilities?

It took us 30 days of work, day and night. Normally, such work requires a lot of approvals. I told the government we needed to work on a war footing. I asked the government for the authority to get the work done. The Public Works Department (PWD) spent more than Rs 70 crore within 30 days on expanding facilities in LNJP. I gave them a deadline of three weeks. They took a week more. I told the chief engineer, you will lose your job if you don’t complete it on time, people are dying. So, all junior engineers were on the job.

Q Finally, how many COVID-19 beds did you have?

Q How did you motivate the doctors, nurses and other medical staff in the midst of so much panic?

We held counselling sessions. Our medical staff said the PPE suits supplied by the government were very uncomfortable. I told them, You choose whatever PPE suit you want and we will pay for it. I decentrallized decision-making. We formed a committee of doctors, nurses and postgraduate students. I told them to tell me what they required through this channel. There was freedom at all levels. If the safai karamchari wanted a particular machine to clean the ward, it was approved.

Medical staff did two weeks of duty and then got two weeks off. We provided them good accommodation. The doctors were put up in five-star hotels. We made sure that after a duty schedule of 10 to 12 hours they could sleep well. We hired 54 DTC buses and provided free transport to nurses and doctors. We spent about `6 crore to `7 crore on transportation. The hospital also provided free food for everyone from the safai karamchari to the doctors.

Q What was the mortality rate?

Around 1.5 percent. The hospital admitted more than 15,000 patients. About 3,000 turned out to be corona-negative. Around 13,000 to 14,000 were positive. Till date (up to February 9) 10,922 patients have gone home after successful treatment, the highest figure in India by any single hospital. It reflects the hard work of our doctors.

We also delivered babies of coronavirus-positive mothers. Altogether we handled 527 deliveries out of which 303 were normal deliveries and 224 were Caesarian section. The hospital handled the highest number of such deliveries. Initially, other hospitals were refusing to do deliveries of corona-positive patients so they used to come here. We created a separate facility for them: a labour room, an OT and a nursery. The patients did very well.

Q What about testing?

A separate testing facility was created, manned by a team of eight doctors and staff. Along with it an advanced virology lab. Earlier, the lab was handling 20 samples. It was expanded to handle 600 samples. We did 200 to 300 RT-PCR tests daily and 500 to 600 of rapid antigen tests.

We also set up a 100-bed specialized ward for our employees who got infected. So, they knew if they got ill, they would be taken care of well. We lost a doctor, a technician who worked in the ICU and a safai karamchari in these 10 to 12 months. Two or three nurses contracted the virus.

Q How did Doctors For You (DFY) get involved?

Our chief minister and deputy chief minister told us that they wanted to help. And they supported us very well. They provided ambulances, beds and manpower. They gave us 100 nursing orderlies, donated computers and printers, set up a paediatric ward. DFY enhanced efficiency in services. The hospital staff was reluctant to handle dead bodies, but DFY undertook this task.

Q So, your hospital is now an advanced hospital.

Yes, there has been a sea change. It’s like a corporate hospital, all very hi-tech. All the beds are well-equipped. We have all the machines required. Right now, we are computerizing all the wards and digitizing all patient records.

Q What are the prominent learnings for you from this experience?

As a doctor, to do my job I should be fully empowered. The Delhi government gave us full freedom to do whatever it took to save lives. We were able to remove most bottlenecks early on. Most brilliant doctors go to the corporate sector because they are paid two to three times more. They get little appreciation for their services. The government has to work on retaining talent.

Q What is your vision for the hospital going forward?

We have to augment our emergency services. We require many more critical care specialists and technicians. We want to introduce a postgraduate course in emergency medicine since we hardly have any such specialists. Only AIIMS has such a course.

Also, state-of-the-art ICUs. The hospital has 200 to 300 ICU beds with ventilators. But we have a paucity of critical care specialists and chest physicians.

We also need to have modular, advanced OTs. If somebody requires surgery immediately, he should be operated upon even in the middle of the night. At present, government hospitals work from 9 am to 5 pm. The system should work round the clock.

We require more advancement in diagnostics and therapeutics. Currently, MRI and CT scan reports arrive after two days. But these things should be made available in real time. Reports should be sent to the mobile phones of consulting doctors within one hour so that they can assess patients quickly. Junior doctors should be able to access these reports as well.