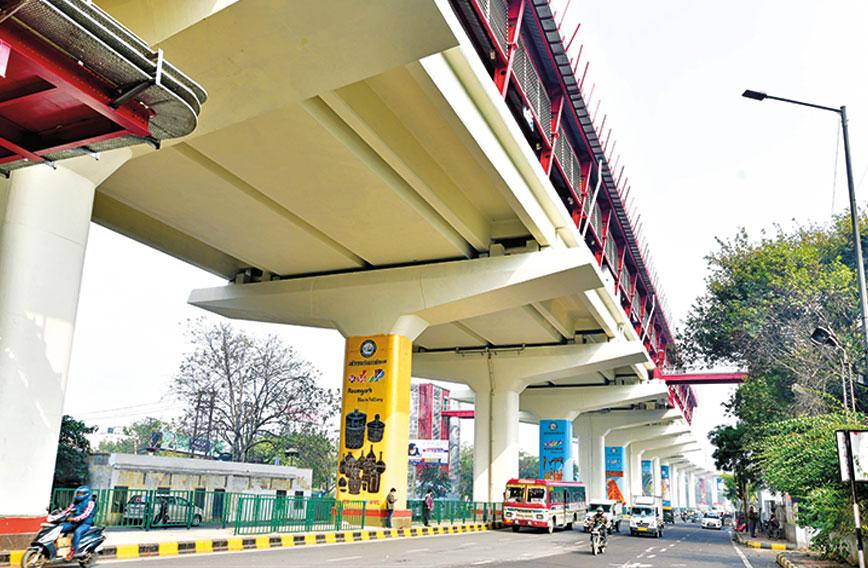 The shift in the balance of power between the Centre and the states has huge implications for infrastructure creation. Before the Goods and Services Tax (GST), the federal structure was not merely political, but also had fiscal and financial dimensions. Now with sales tax and octroi gone, the states find themselves in many ways fiscally impotent.

At the same time, the federal political structure is such that a chief minister cannot disown responsibility for the economy because of the lack of revenue certainty. The chief minister is there to deliver growth, prosperity, increase in real wages and generally meet the aspirations of people who vote a party to power in a state.

The finances of the states were already stretched before GST, but with collections falling short and promised compensation also not being transferred to the states, they suddenly find that they have no money to spend.

So the question now is what is the model that the states can adopt to replace the earlier one and meet the expectations of delivery that remain unchanged. One path is fighting with the Centre, but that is hardly a solution.

Some time ago, in the late 1990s, we addressed the problem of a state’s dwindling finances in the face of needing to invest. We came up with the Punjab PPP Model, which is based on recognizing infrastructure as the biggest driver of jobs, livelihoods and economic activity in general. We identified infrastructure, both rural and urban, as the engine, which if made to run energetically, can deliver the goods that people want.

It is a particularly relevant proposition today. If the states can define creative ways of funding infrastructure, they can realistically move on from the difficult situation in which they find themselves — and move on they will have to since changes in the federal equation with the Centre and restoration of their share in GST seem improbable in the foreseeable future. A state really has no option but to get its act together, give up its dependence on the Centre and become the arbiter of its own destiny.

I was instrumental in selling the Punjab model to the then chief minister, chief  secretary and finance secretary. What we created was a twin structure. It was a state-level infrastructure fund twinned with a Punjab Infrastructure Board. So, there is a fund and there is a board that governs the fund. The creativity and commitment with which such a board is set up will determine the success of the state.

Obviously, it’s easier to set up a board than to fund a fund. So the question is what do you do to fund a fund. Other than starting capital, which can come from the state budget, a few lakhs of rupees, the model is that the state must now find sources of revenue and direct those revenues into this fund.

In Punjab we suggested an increase of three percent in mandi cess since Punjab is a rural and agriculturally prosperous state. We said, out of the 14 crops you have in the mandis increase the cess on three crops by three percent. We chose mustard, cotton and something else. The cess would provide an annuity/income every year outside the budget. It would serve as a stream of income.

Every state can’t follow the Punjab model. If a state is rich in tourism, for example, it could probably have, like in Singapore, a tourist tax. A state like Himachal should probably have a tourist tax of five percent on all hotel bills where tourists check in normally or where you are buying tickets for entry. Each state has a DNA on the basis of which it should craft a cess in a manner that doesn’t cause a public uproar.

A state can no longer do sales tax and GST and levies on alcohol, petroleum, aviation fuel, etc, are anyway being used to fund existing state expenditure. The only solution is to have an additional stream of revenue by way of a cess the public is willing to pay.

Once the state has funded the infrastructure fund, there is potential to leverage it. Leveraging is done in two ways. One, if the project costs `100, then you put in `40 or `20 from the fund you get, the private sector puts in another `20 as a 50:50 PPP, and then the state raises the balance `60 as debt. Effectively, with a `10 corpus of the fund you have catalyzed a `100-crore project.

The other way to do it is the Mumbai-Pune Expressway model or the Lucknow-Agra Expressway model. The state takes the money from the fund and finishes the road project itself. Once it is ready and demonstrable and working, you then sell it, which means you monetize it by giving the toll collection rights to somebody for 40 to 50 years and you get your cash back.

There are mega infrastructure projects with high visibility, which can be funded by the state. The Jewar airport in Noida, Uttar Pradesh, is an example. Similarly, there are traditional state highways, ports and rural roads. Such projects will always exist.

But a plethora of mini projects also drives growth brilliantly. We are right now witnessing an upsurge in rural India. I’m on the JCB Board and it’s astounding how many earthmoving machines are suddenly selling. Similarly, you have retail cement sales. What is causing this rural boom? It is not happening because there has been an 18 percent increase in the kharif sowing area. Sowing doesn’t lead to prosperity, harvesting will. But it is nevertheless happening. I have traced `150,000 crore of central expenditure that has been pumped into rural India under different schemes, principally MGNREGA, and that is touching around `300 crore per day.

It is greatly beneficial to invest in local mini public works — a panchayat office, cleaning up of a water body, roads in the hills, or from district town to village, a street with lighting, solar panels. Such investment drives local consumption. The moment you are creating an embankment, bricks are selling, cement is selling, electric wire is selling, tiles are selling, chaps who are masons are getting jobs. Creating a panchayat office suddenly creates workflow for seven or eight people. And then 15 products start selling from locally assembled furniture to lights, switches, and fans.

At one level a state’s infrastructure fund could be thinking what Yogi Adityanath is thinking  — Jewar airport, the Agra-Lucknow road and so on. But spend also at the doorstep of the village where the unemployment is, where the misery is — on mini public works.

An infrastructure fund put together by a state using its own devices gives it credibility and visibility and improves its chances of raising more money. It puts it in a position to attract central spending and even direct it to areas where it needs investment most.

A very interesting model is in Kerala, which for the first time floated bonds for a State Sovereign Guaranteed Infrastructure Fund. It is the only state that has ever been allowed to do so. Having given permission to Kerala, the Centre suddenly woke up to the fact that collecting money internationally, be it from Abu Dhabi or NRIs, created a foreign exchange liability for India. The result is states are banned from raising funds abroad.

But that doesn’t prevent states from issuing bonds and raising funds in India. All a state needs is credibility and evidence that it has the revenue streams to pay back investors.

Municipal bonds are also a solution that states need to explore. Every city in this country is strapped for funds because cities never had a financial destiny of their own. They depended on largesse from the state capital. The time has come for the states to take an interest in municipal bonds.

You’ve got to reform your city administration. You’ve got to have double entry accounts. You’ve got to start charging for services like water, garbage and effluents, and you have to create an income stream. Escrow it, put it up to financiers and say how the bonds will be repaid. The Centre has not stopped the states and municipal administrations from issuing municipal bonds. On the contrary, successful examples such as in Pune already exist. More needs to happen.

Another point I want to make is that the agriculture reforms that have just been announced open up a vast area in the hinterland of states to create a new generation of infrastructure in the agricultural sector, which is a state subject.

There are opportunities in cold chains, cold storages, mandis, sorting and grading centres. These are all investments waiting to be made. They have the potential to quickly translate into farm-related employment and prosperity as local entrepreneurship grows.

Whether it is a big or small project, a state government needs to be intelligent in  crafting a product that has demand. If it crafts it well, there are bidders for it. The market takes over.

Jewar airport serves as an example. There is a strong undercurrent for landowners in the Noida area because their land prices go up 100 times. It’s a win-win situation for everybody. UP says it has an international airport, the landowners benefit.

The UP government is putting in very little. It has broadly paid for the land acquisition. And it has very intelligently managed its equation with the Centre to get Airport Authority permission and other clearances. Zurich Airport has won the bid and is putting in the money. What will be created is one more aero-city that will lead to more businesses and the creation of a lot of jobs.

Or take the example of the massive expressway from Lucknow to Agra. You tell LIC to just fund land acquisition to put the project design and DPR together. Then you put it up for bidding or build and monetize it. If you have specific projects backed by physical assets or a bidding plan, if a credible proposition is put up, money is not the problem even under today’s strained conditions.

Another important source of funding is monetization of state-owned assets. Why can’t the government of West Bengal bundle its highways and put them up for bidding just like the Centre does? There will be takers. Bus terminals in Durgapur and Asansol are sitting on prime land that can be monetized for commercial complexes. Why can’t the state government sell the space on top for people to build commercial complexes? The government of West Bengal owns power-generating companies. It should be selling them off.

A betterment levy can also be used to bolster state finances. It works like this: the moment an arterial road is built, or any infrastructure project happens which is broadly linear — like the Rapid Rail from Delhi to Sohna — the land around it appreciates 10 or 20 times. The expenditure is public expenditure, but the spin-off benefit is private and goes to cronies of political systems or brokers. How can the state get a share of that?

A betterment levy makes it possible. Any land transaction along the alignment of the project can attract a levy over and above the stamp duty — it could be 15 percent from 0 to 500 metres from the carriageway; 10 percent for 1,000 metres to 1,500 metres; and five percent beyond that.

Like this, when public expenditure leads to private gain, there is at least a mechanism to capture something. If the Centre is building a national highway it is only fair that the betterment levy be shared by the Centre and the states it is running through. But if the expenditure is made by the state government, then it should take 100 percent of the value captured of the surrounding land for 10 years.

The current crisis will force states to think creatively and if they come up with the right ideas and the mechanisms to implement them, funds can flow into their coffers.

Vinayak Chatterjee is the chairman of Feedback Infra.