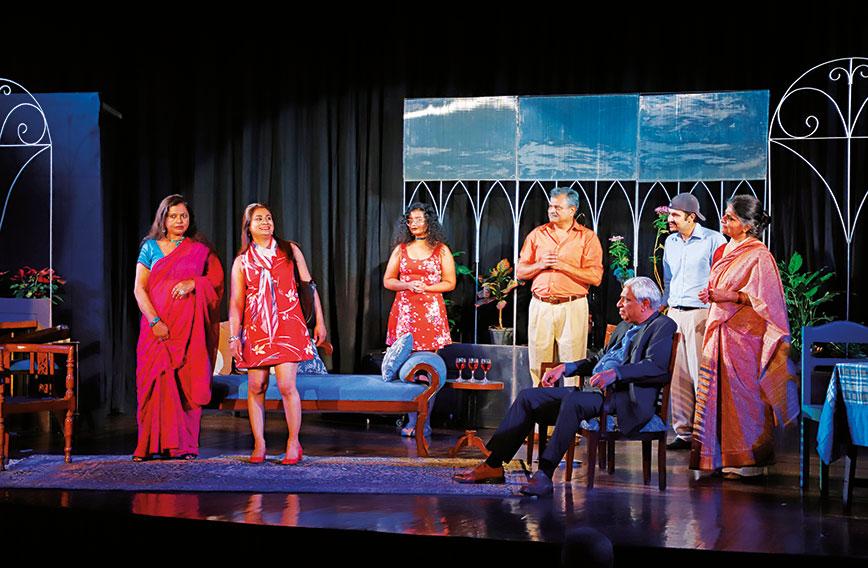 When a family meets: A play on relationships

A family drama simply entertains but The Gathered Leaves is not that kind of play. An upper middle class family in Delhi’s posh Sunder Nagar is getting together after 17 years. Anything can happen.

The play, directed by Feisal Alkazi and performed by his troupe, the Ruchika Theatre Group, took place on a smoggy November evening to a packed auditorium at the India International Centre in Delhi.

Gautam, one of the sons, has autism and Kaushal, the 75-year-old family patriarch, discloses that he has Alzheimer’s. How do families change when they have to care for an autistic person? And how do they react to Kaushal’s disclosure even as unresolved grudges and resentments simmer under the surface? The play handles many questions families grapple with in modern India.

There are scenes that make you laugh and there are scenes where characters lay bare their emotions. In a moving sequence, Rajasvi, the estranged daughter who has been away for 17 years, confesses she feels lonely. She left home because she got pregnant out of wedlock, and refused to get an abortion, much against her father’s wishes. Gautam, who lives in an institution, feels the same loneliness.

“For me, theatre is about ‘this has happened to me, has this happened to you too?’ That’s the only question we should ask,” remarks Alkazi.  The play reflects the status of the average family. Siblings lose touch with each other, young cousins sneak around the liquor cabinet and parents neglect one child in favour of the other. It is all very real. 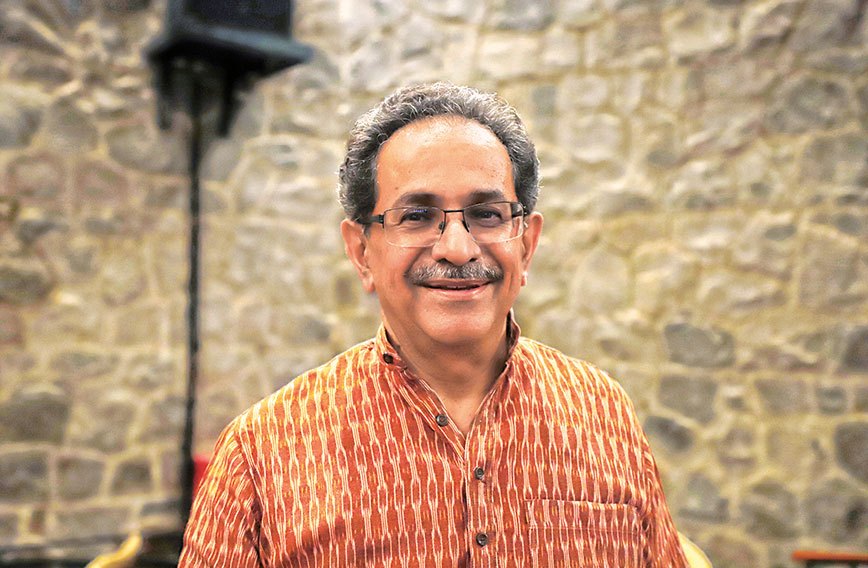 Autism is not treated with melodrama. It is only one of many things the family confronts. This sensitivity towards autism brought Ruchika Theatre Group and Action for Autism (AFA) together for the IIC performance. In November, AFA completed 25 years and the event was meant to commemorate it.

Merry Barua began AFA in 1994, while on a quest for better services for her son who has autism. What began as an outfit to raise awareness grew tremendously over time. AFA now works on teaching methods for autistic children in a model programme called Open Door Day School. They also train parents and professionals on assisted living for adults with autism.

“For us autism does not have to be the central theme. In fact, we would prefer plays or movies where autism is about a person in the neighbourhood. It could be a relative. It has to be something incidental. In our country, either you make a My Name is Khan or there are no autistic people in films at all. In reality, this is not so. It’s part of our environment,” said Barua.

Many in the audience were people with autism or parents of autistic children. Ashish Dhameja, the actor who played Gautam, spent four months with AFA to understand autism. Barua was very appreciative of his performance. “What Ashish brought to his role was a depth that made it very meaningful for us. He asked a million questions because he wanted to understand why they do the things they do.”

The cast delivered impressive performances. Yogesh Verma, who played Kaushal, embodied the patronising, entitled patriarch. During the play, he tells his 19-year-old grandson that he must produce a male heir. “I want you to promise me that you’ll continue the family name,” he says. With Yogesh, the line between the actor and the character disappears, an unmistakable indication of his talent.

The youngest actors of the cast, Manvi Nahar and Lavanya Sinha, did not disappoint. They are both in Class 12 and will be appearing for board exams next March.

Alkazi said that almost half of rehearsal time was spent reading the script closely, examining every word and discussing it. “The first reading and the first response to a script is so crucial to your understanding of what you finally have to communicate to an audience,” he says.

Actors brought their own personal experiences to bear on the play. Alkazi explained that in the Stanislavski approach to theatre, the actor finds a parallel experience in their life that mirrors what the character is going through onstage. That approach worked well with The Gathered Leaves. Still, there can be no formulaic approach to theatre. “Every play has its own process. I don’t have a hard and fast way of approaching a script.” 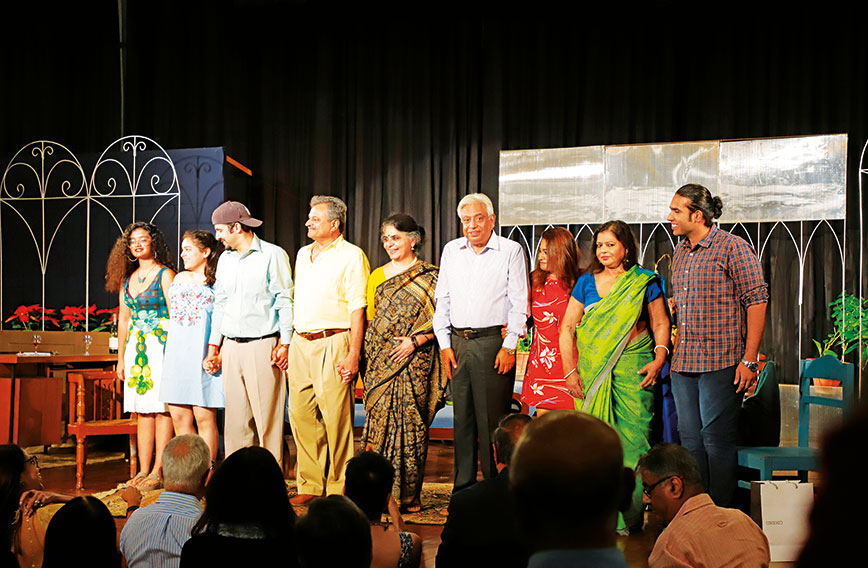 Alkazi likes to creatively grapple with a script along with his actors. A week before the show, Alkazi invited Barua and her son, Neeraj, to a rehearsal. “For Yogesh, it was a revelation, that this is really what autism is. He was so aware of his presence and it just changed his playing of the father.” Neeraj was rocking throughout the rehearsal, as is typical of people with autism, and Verma was very conscious of his movement. “These immersive experiences are very important for the actor to bring authenticity to what they’re doing,” he said.

Four years ago, when Alkazi was in London at the National Theatre’s bookshop, he picked up some 12 plays. Andrew Keatley’s The Gathered Leaves was one of them. “I immediately thought of it in an Indian context, even though it is a completely Western play.” It was very authentic writing and not a word of the dialogue has been changed, except names and topical references.

The 64-year-old director likes a good challenge. He says, “If I read a script and I know how to do it, I don’t. It means I’ve already done something similar before.”

The play has also been performed in people’s homes. It is a play ideal for intimate settings in which actors can gauge audience reaction.

“For the audience it was overwhelming to see Gautam’s meltdown at such close quarters, or for the father to talk about his Alzheimer’s. You’re really in the midst of this family,” remarks Alkazi.

Alkazi comes from a family of theatre practitioners. His father, Ebrahim Alkazi, was director of the National School of Drama from 1962 to 1977 and actors like Naseeruddin Shah, Om Puri and Piyush Mishra trained under him.

Alkazi, on the other hand, doesn’t have formal training. He was directed by his father in many plays and sat through his father’s rehearsals from a very young age.

Alkazi started the Ruchika Theatre Group in 1972, with friends from Modern School. It has been a long association. His lights director, Sunil Arora, has worked with him for 45 years. Nandini Sra, who was cast as the daughter-in-law in The Gathered Leaves, has been working with him since 1986.

“I’ve never done a play which doesn’t have a strong social message,” reflects Alkazi. He has a master’s degree in social work and has been working as a counsellor with Sanjivini Society for Mental Health for the past 35 years. He finds his counselling work fascinating because he also witnesses a society undergoing change.

At his residence the conversation shifts from censorship to theatre’s limited reach to the Mathura rape case and his most recent concern over how dating apps are changing the way we perceive ourselves and relationships. In fact, his next play, Splendour in the Grass, which opens on December 6, is about the intimacy between two students in their last year of school.

“My view is that any creative process in theatre has got to be collaborative if it’s to have significance. Only if we are all on the same page can it mean anything to the audience.” In The Gathered Leaves, the emotions are movingly genuine and touch the audience. The play holds up a mirror to modern Indian society and forces the audience to delve into complicated realities.