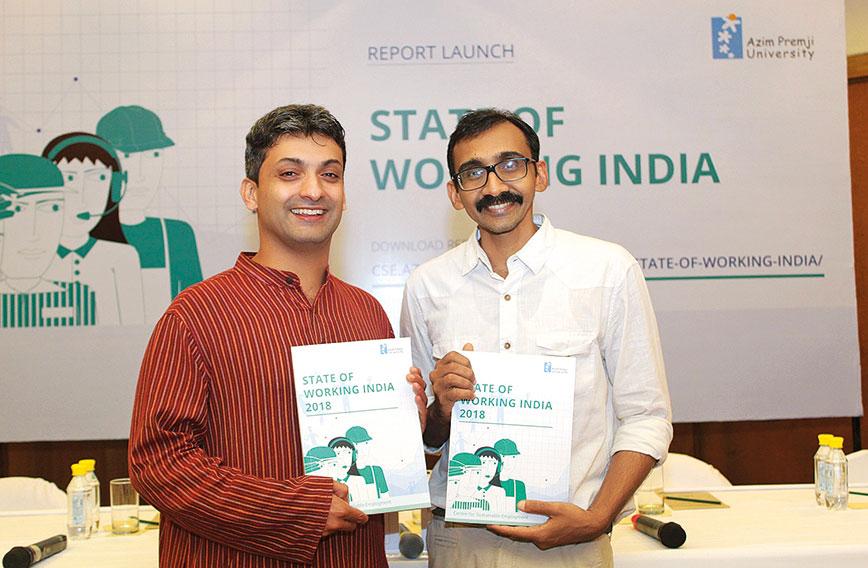 Arjun Jayadev and Amit Basole with their report

Job creation was on the agenda of the BJP government when it came to power four years ago. As India readies for the next electoral battle, jobs have become a topic of intense debate among economists. Some say jobs have increased, others say jobs have decreased, depending on their political affiliation.

A more nuanced view is presented by the Azim Premji University’s (APU) Centre for Sustainable Employment. It recently released a report, “The State of Working India 2018”, which attempts to answer basic questions of India’s job market: who is looking for work, where is the work, how good is the work and who does the work.

The objective of the report is to “develop a road map to create just and sustainable employment for all,” writes Anurag Behar, Vice Chancellor of APU.

The report’s lead author is Amit Basole, School of Liberal Studies, APU, and it has contributions by noted academics. A lot of charts, maps, graphs and other data from official sources and field surveys have been demystified to present a cogent picture of the quantity of employment and unemployment, the sectors and industries that are creating jobs, the states that are performing better, the quality of jobs, and the effect of caste and gender disparities.

Here are some highlights of the report:

A rise in GDP doesn’t create jobs. It used to be said that India’s problem was underemployment and low wages. The new feature of its economy is a high rate of open unemployment which is now over 5 percent. For the youth and the better educated, it is as much as 16 percent.

Unemployment is visible across India, with the exception of Karnataka, Chhattisgarh and Gujarat. But the most unemployment is experienced by young, male graduates in northern states. This perhaps explains the agitations for reservation in government jobs. The problem isn’t of merely providing jobs but of creating decent, better-paying jobs.

Wages are rising very slowly. Eighty-two percent of male and 92 percent of female workers earn less than Rs 10,000 per month. The minimum salary recommended by the Seventh Pay Commission and demanded by labour activists and unions is Rs 18,000 per month. But even in the organised manufacturing sector 90 percent of the industries pay below Rs 18,000. The situation is worse in the unorganised sector.

The organised manufacturing sector no longer yields the number of jobs it used to, regardless of investment. The outliers are knitwear, plastics and footwear which provided jobs and some increase in wages.

Jobs in the organised manufacturing sector are, on the whole, not ‘decent, remunerative or stable’. As much as 30 percent of workers, mostly in capital-intensive industries, are contract workers or, worse still, trainee and apprentice workers, who are paid even less.

Workers are slogging long hours for less money. Labour productivity increased by six times in the past 30 years but wages increased by only 1.5 times. Even managers and supervisors are being paid less. “The labour share of income in organised manufacturing has collapsed to around 10 percent,” states the report. Such a scenario increases inequality.

According to field surveys and anecdotal evidence, firms choose to grow by setting up a series of small factories instead of a large one, to duck labour laws. The reason is that laws are based on factory size and not firm size. There could be under-reporting of workers too. In 2011, an estimated 54 million workers were in manufacturing as per household surveys. But firms surveyed reported only 47 million workers.

Employment in service sectors, including IT and retail, increased from 11.5 percent in 2011 to 15 percent in 2015. But more than 50 percent of service sector employment still consists of petty trade, domestic services and other types of small-scale and informal employment. Also to be noted is the structural shift taking place in the IT sector with artificial intelligence, robotics and block chain gaining ground.

Sixteen percent of service sector workers are women and 60 percent of them are domestic workers. The number of women in higher paid jobs as senior officers, legislators, managers shows a declining trend. Women constitute 22 percent of workers in manufacturing, mostly in textiles and garments, tobacco, education, health and domestic workers and they earn on average 65 percent of what men earn. But this gap is narrowing in the organised manufacturing sector and is less among well-educated and regular female workers.

While women’s participation in the workforce is low, there are variations across states. Only 20 women are in paid employment for every 100 men in UP. But in Tamil Nadu it is 50 and in the northeast as high as 70. According to some field studies, women don’t join the labour force not because of social constraints but due to lack of opportunity.

It is the government that is creating the maximum jobs for women through MGNREGA, and by employing women as ASHA workers and anganwadi workers. The women are paid stipends. What has been created is a vast rural workforce of underpaid workers with basic skills. Women are also moving up from being primary school teachers to becoming secondary school teachers.

Public policy is reducing caste disparities. Most Scheduled Castes (SCs) are employed in the leather industry (46 percent). They make up 18.5 percent of all workers. But, due to reservation, both SCs and Scheduled Tribes (STs) are better represented in public administration. They also earn less than upper castes (56 percent) on the whole,  but the gap narrows with better education.

The report also found that the crafts sector is a big employer and central to the rural non-farm economy. India has over 500 officially listed arts and crafts. The sector can provide millions of jobs that are eco-friendly and enhance existing skills. But, the government has to treat crafts as an industry and not as some kind of conservation exercise.

Workers leaving agriculture are mainly moving to construction. But only 10 percent of the construction sector is formalised. Another sector which is providing employment is the security sector which now employs seven million people.

Other interesting information is that the pattern of migration is changing with people from Bihar and UP migrating to Kerala and Tamil Nadu instead of Delhi and Maharashtra.

Other surprises are that Punjab, perceived as an agricultural state, has fewer people in farming than any other state in north and central India. In manufacturing, West Bengal, with its large unorganised manufacturing sector, is on a par with Gujarat and Tamil Nadu. Kerala, Jammu and Kashmir, Himachal Pradesh, and Goa are leaders in service sector employment. Maharashtra, Madhya Pradesh, Andhra Pradesh, and Bihar as well?as several smaller northeastern states still report agriculture as their primary occupation.

The study can be downloaded from the Azim Premji University’s Centre for Sustainable Employment’s website.