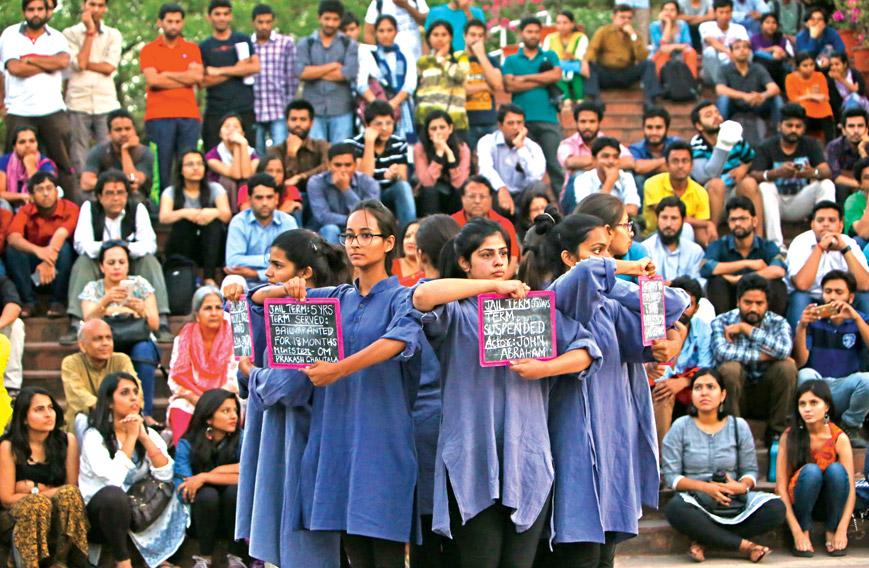 Equipped with drums, flutes, harmoniums and daflis, the performers encircled the Administrative Block of the university to call out to students and faculty and get them to join in.

National Street Theatre Day is also the birth anniversary of Safdar Hashmi, the slain theatre artiste and CPI(M) member. Every year the Safdar Hashmi Memorial Trust or SAHMAT recalls this brave hero and pays tribute to the undying spirit of street theatre.

Noted photographer Ram Rahman and theatre personality M.K. Raina briefly described the genesis of SAHMAT and the culture of protest that it has facilitated over the years to the audience.

“Twenty-eight years ago, Safdar was murdered in Jhandapur while performing a street play called Halla Bol. SAHMAT was formed right after that assassination,” said Rahman, as he set up the mike for the upcoming performances. “SAHMAT is a group of artistes, actors and writers who do not formally associate with any political party. We have been linked to the CPI(M) because Safdar himself was a part of it. But we function independently. We observed the first National Street Theatre Day in April 1989 after Safdar’s death.”

Using JNU as the venue highlighted the significance of the day against the backdrop of the ongoing protests by students and activists across the country. According to Rahman, every year SAHMAT designs standard posters with a space for local groups to highlight their programmes. “The posters have always been themed on a cultural or political issue. This year, for the first time, we designed a poster with a poem by Rohith Vemula instead of the standard space,” he says.

Raina explained, “Street theatre is rapidly emerging as a distinct form of protest. Many artistes are associating with street theatre and experimenting with language and other tools to convey political, social and cultural injustices. It has become a weapon and a platform for people’s movements.”

The performers, all women dressed in blue, began enacting the play, named  Justice abhi far hai. They belonged to Lakshya, the theatre society of Kamla Nehru College. The play was staged as a ‘game’ that hinted at the rampant corruption within the judicial and political systems of our country. It quickly transformed into an outright critique of the judicial system that turns a blind eye upon political and high-profile cases and delays or dilutes petitions by ordinary people.

There were references to cases like the Jessica Lal case that showed the incompetence of the judicial system in penalising the guilty. The performing women positioned themselves as a rotating circle, holding placards with names of victims and the absconding perpetrators of atrocities.

They sang in unison against the injustice and indifference of the authorities to acknowledging the rampant corruption and the perpetual exploitation of the downtrodden. As the performers raised critical questions through melodious rhymes, the audience started chanting and clapping.

The play was written and directed by the performers themselves, who say they have staged it at various universities. The performance ended but the ensemble, comprising musicians, maintained the mood of the play. 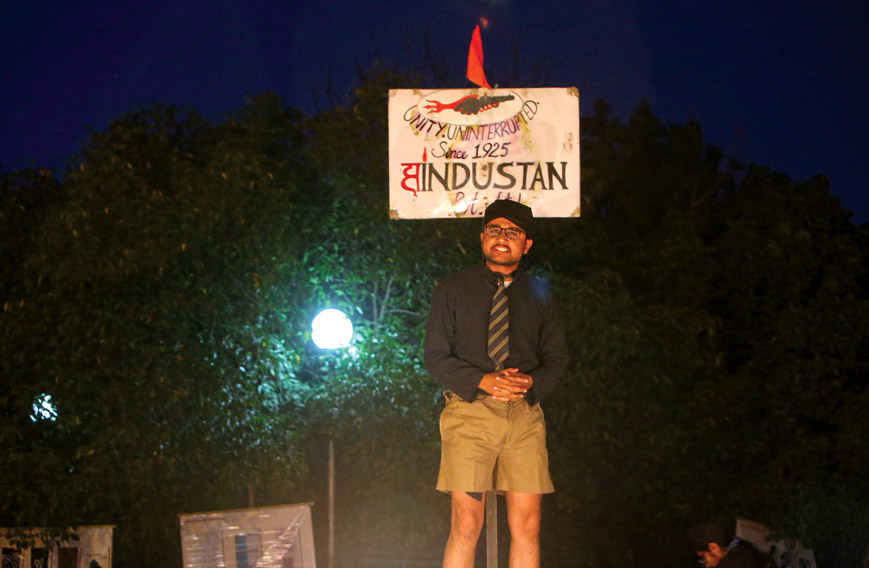 The second performance had actors in khaki shorts, from Ankur, the theatre society of SGTB Khalsa College. Street 2016 was a sharp satire on the ignorance, hypocrisy and fanaticism of right-wing groups dominating the current political scenario.

Four metal cages, each with a performer, were assembled to form a square platform. It represented a corporate organisation named ‘Hindustan Limited’ that worked to enforce right-wing patriotism in citizens. The chairman of the company stood atop the caged platform, highlighting the atrocities resulting from power.

The play was laden with puns and snide comments about the victimisation of students and their political and sociological ideologies by the State in the name of patriotism. 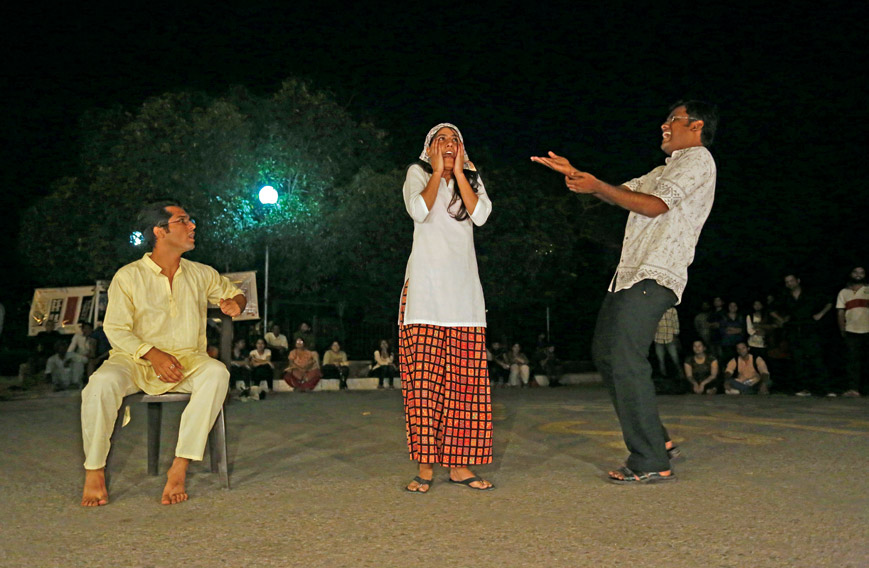 The final performance was by an independent theatre group, Bigul, formed in 2007 and comprising college students. They have staged a dozen plays highlighting their concern for society. Peerun, by Saadat Hasan Manto, revolved around Manto’s life in a Bombay chawl.

His roommate, Brij Mohan, falls in love with Peerun, a Parsi girl. Their romance takes an unusual turn with Brij coming up with a strange theory that he loses his job every time he meets Peerun and blaming her for his unsuccessful career.

The play kept the audience rivetted with its one-liners and puns. The cast comprised young and old actors, with narrator Sanjay (Manto in the play) stealing the limelight with his performance.

The dramatised details of life in a chawl, discussions about a water bottle and day-to-day fights over the use of a single bathroom provided the audience scope to internalise the play as a real-life event. The portrayal of Peerun, particularly, invoked mixed emotions.

The three performances conveyed emotions, information and art in a manner no lecture or speech could achieve. Each play, uniquely themed, was a critique of the existent discrimination and injustice.