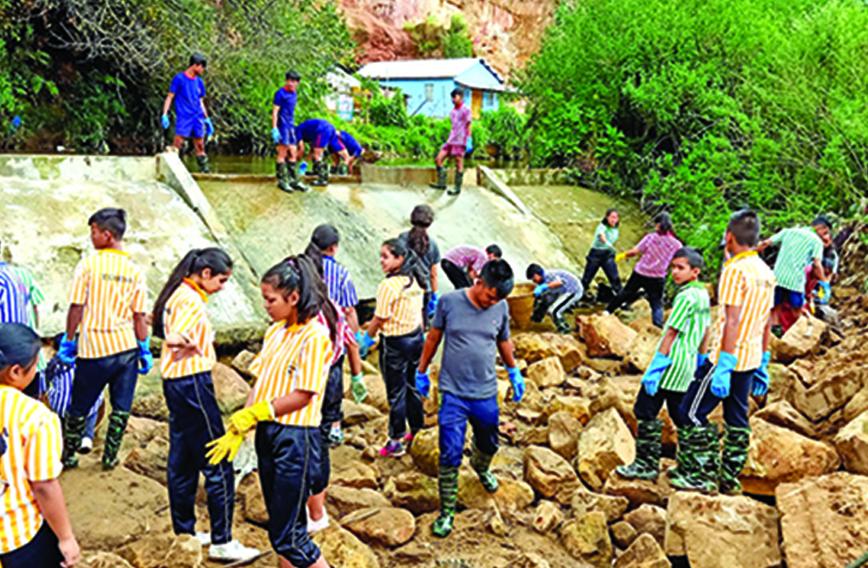 The Shillong Times bonds with its city. A local clean-up led by the newspaper

Walking a fine line on the nation’s periphery

At the time of writing this piece one is baffled by the shutting down of The Shillong Times for the second day. For an editor, the newspaper is a baby that needs to be born every day. To not be allowed to bring out the publication simply because two machine men have tested positive and duly quarantined is too stiff a punishment. But that’s the price that COVID has extracted from a publication that has been reporting extensively on how the coronavirus pandemic is being managed in Meghalaya, what the gaping lapses are and the stigmatization and paranoia that has created vigilantes who decide what to do with homes and institutions where people test positive.

On the pretext of working closely with these local traditional institutions, governments are succumbing to their diktat. Although these same institutions have been rendering yeoman’s service during the lockdown — distributing dry rations and other such utility items — the fact that they do not operate within constitutionally mandated legislation makes them a law unto themselves.

And this is the legacy of India’s troubled annexation of territories that have, prior to the British incursion, been little independent principalities. Post-independence, these principalities were either annexed by Instruments of Accession or by mergers. These principalities, which later became states, were however allowed to hold on to their practices of governance although they are outdated in the present circumstances. In 1988 when the Rajiv Gandhi government passed the progressive 73rd and 74th Amendment Acts for creation of urban local bodies and panchayats, the states of Mizoram, Nagaland and Meghalaya were exempted from the purview of the Acts because a limited understanding of the manner in which these governance bodies functioned informed the Government of India at the time to take the regressive position that has now rendered civic governance hamstrung.

It is in such a turbid situation of several bully pulpits, each one issuing their own diktat, that the media operates. There are several non-State actors and pressure and interest groups that exercise overt and covert influences over us. Then we also have to contend with court orders that tell us not to publish press statements from outlawed underground outfits, especially those calling for bandhs on the eve of India’s two important national days —  Independence Day and Republic Day.

For nearly 30 years, the states of Meghalaya, Nagaland and Assam have not been able to hold Independence Day or R-Day observances. The entire state would be under lockdown. Governments would of course send out the compulsory missives that people should not give credence to the boycott call by underground outfits. But governments that cannot ensure that the life and limb of a citizen is protected if she does venture out and attend the R-Day or I-Day parade are unlikely to get compliance. It has taken strong public resolve and the court’s intervention not allowing boycott calls by outlawed outfits to be published by the media to make people dare to defy gun-toting outfits issuing diktats from Myanmar and Bangladesh.

Media people and editors have, however, learnt to co-exist with underground outfits, with cantankerous governments, with out-of-work pressure and interest groups and with grumpy judges punishing editors and publishers for contempt of court merely for reporting what judges demand as retirement benefits.

What do media personnel from this part of the distant periphery feel about the much glorified “national media,” although the moniker is presumptuous, to say the least. More than media personnel it is the citizenry that feels a sense of grave alienation by this national media that has for more than a month now made a Bollywood actor the subject of intense scrutiny, to the exclusion of every other issue. Assam has had severe floods this year resulting in the loss of lives and livelihoods. Barring one media outlet, India Today, who sent their reporter for extensive coverage of the floods, and who reported that about 7.6 million people have suffered and lost everything, other media busied themselves with metropolitan gossip and the corona misadventure. A month before the floods, an oil well in Assam called Baghjan near Tinsukia district went ablaze. It was a major disaster and the fire continued for several days until some external agency came to douse it. The metropolitan media (for that is what they should appropriately be named) has no time for what happens on the distant fringes of the nation where states are closer in distance to China than to Delhi.

When we hear of words like “the free and fearless press is the greatest ally of a free and prosperous people”, we cringe. Here, on the distant margins, we try and defend media freedom at great cost to ourselves but we also adopt a value judgement on how the corporate-owned media conduct themselves. Most have become allies of the government and hence enemies of the people. The prime time debates make us wonder who the hell the media is trying to defend: the citizen or the government. A section of the electronic media is evidently doing the latter. They are certainly not an example we can emulate. But increasingly this behaviour is becoming a role model for survival amidst the gloom that encircles us — the gloom that engulfs those from old school journalism who believe in the dictum that the media should give voice to the powerless and the destitute of this nation, such as the millions of migrant workers who had to trudge amidst insurmountable difficulties to reach their villages.

But working in this atmosphere of claustrophobia can be enervating. Your strength is sapped by the knowledge that prising open a corruption scandal can land you in a case of criminal defamation even when all the odds are stacked against the corrupt. They have the money to file cases that they know will take years to be resolved. But they have pulverized us — made us do the rounds of courts, employ lawyers although we operate on a shoestring budget.

At junctures such as these one feels the need for solidarity groups that can lend their valuable moral and professional support in terms of offering advice and guidance. The Editors’ Guild of India (EGI) has been a bulwark supporting editors and journalists who have been arbitrarily arrested. But the EGI is also being made irrelevant in the face of the onslaught by forces inimical to a free press.

While the pressures of right-wing politics have not reared their ugly head in the region as is happening in the national capital and other BJP-ruled states, we are tested day in and day out by other external factors such as the traditional institutions which in the current COVID-fighting regime have been vested with powers not commensurate to their stature. Every public institution ought to be subjected to accountability frameworks. Their powers cannot be unchallenged.

In 2014, a judge of the High Court of Meghalaya tried to pull the reins on the arbitrary powers of traditional institutions after a litigant filed a case against a particular headman for issuing No Objection Certificates to residents under his  jurisdiction when they wanted to apply for loans or run businesses and even get birth and death certificates. The High Court had ruled in that particular case that there cannot be parallel governments to govern over citizens with some of them hell-bent on depriving the legitimate rights of citizens to practise their trades or solicit money in lieu of those certificates. It is a known fact that the traditional institutions or headmen take money from land sale transactions. This the Meghalaya High Court found untenable since the traditional institutions have not been granted powers under the Constitution to execute such transactions.

This is the very reason why an FIR was filed by the Dorbar Shnong (traditional institution) of a particular locality called Lawsohtun against this writer. On July 3 this year, five non-tribal boys had gone to play basketball in Lawsohtun, a locality with a majority tribal population. The five boys were trapped inside the basketball court and were beaten black and blue by masked men armed with rods and stones. The non-tribal boys managed to run for their lives. Their families filed an FIR at the local police station but the assaulters were not arrested that day and for several days after that.

I had put out a social media post questioning why the assaulters were not arrested. I also asked why the Dorbar Shnong of Lawsohtun was not able to apprehend the perpetrators of the violence. I questioned how it is not possible for the Dorbar to identify the bad elements in their locality. The Dorbar took affront at this and filed the FIR against me. Later, several tribal groups put out posters saying #Arrest Patricia Mukhim. The police registered the FIR. I contested the case at the High Court, seeking that the FIR be quashed as it had no merit. The High Court refused to quash it but asked the respondents to show cause. Following this, my lawyers advised me to approach the Supreme Court. And the case is ongoing.

Now there is a history to this recurrent conflict. Since 1979 the tribes had tried to dislodge the Bengali settlers from Meghalaya. Much violence was unleashed on non-tribal settlers here who included teachers, doctors, lawyers, government employees. In 1982, similar violence was unleashed on the Nepali community. Such ethnic violence carried on from that time until the early 1990s. After that Meghalaya saw the emergence of a militant outfit called the Hynniewtrep National Liberation Council (HNLC). This group too targeted non-tribal businesspersons by extorting huge sums. Those who did not pay up were shot in broad daylight. Quite a few left the state and settled elsewhere.

In this sordid environment where reporting the truth is fraught with grievous consequences, it is difficult for the media to operate with objectivity and fairness. The majority tribal community expects you to take their side in any controversy. If you don’t do that you are considered a traitor to the larger tribal cause. But The Shillong Times has never bowed before any superior might even though we have had to pay a heavy price for that. We hope to be able to fly the flag of a free media as long as our heartbeats allow us to.

Patricia Mukhim is editor of The Shillong Times.