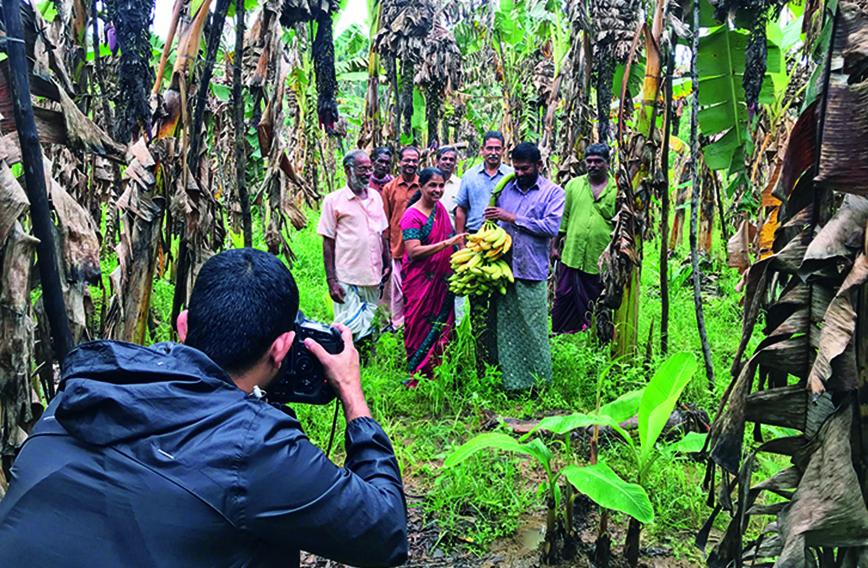 Our prime time: We were in Kerala to profile the remarkable Dr C.R. Elsy and the growers of the unique Chengalikodan banana

When we were in the process of launching Civil Society, the few people we confided in raised obvious and well-meaning concerns. Who will read it? How will you keep funding it? Will you be able to bring it out month after month? Where will the stories come from?

Setting out as we were with a new idea, we didn’t have convincing answers to these earnest questions. But what we did know for sure was that government was receding, the private sector was gaining in prominence and social entrepreneurs of all varieties were playing an increasingly valuable role in trying to ensure equity and balance in emerging equations.

As we envisioned it, there was a need for journalists with mainstream skills to put out the stories resulting from this complex interplay of interests, without taking sides. These were stories that, for several reasons, eluded the big media in print and television. We felt that we could tell them well and there would be readers who would pay.

In 2003, the year we began publishing, talk of a subscription model was seen as being unrealistic. Now it is in fashion. But back then revenues had to primarily come from advertising. The current trend of asking readers to pay for content was unheard of then. We were, if you like, mavericks in this regard and went to the extent of pricing a subscription above the cover price so as to know how much our subscribers loved us!

Of course we got advertising too, but not the kind that influenced editorial. Our advertisers have been supporters of the idea of Civil Society magazine. Naturally, advertising being commercially driven, we haven’t found too many companies ready to advertise, but those who have come along have been perfect angels.

Seventeen years later, we continue to savour what we believe are the joys of plain vanilla journalism. We do the stories that interest us and surprise our readers. No story is too small for us. Our motto remains: Everyone is someone.

Our very dear friend, the late Anupam Mishra, once said of Civil Society magazine that it was “born in the general ward of a general hospital”.  We try to hold on to that anonymity even today because it allows us to explore spaces we could never otherwise imagine entering. Being part of the establishment is not for us. The stories that come to us as a result are what keep bringing back our subscribers for more.

Being small and underfunded has been both a good thing and a problem. Money is needed, but how much? And should profitability take precedence over one’s journalism? We have got by on very little and ensured that we keep costs down and remain sustainable. Our modest ways have especially helped us now, in the midst of the pandemic and economic slowdown.

Reader loyalty has also been a boon.  As most publications gasp for breath with advertising gone and readers not willing to pay, we are lucky to have readers who don’t mind being donors much beyond their regular subscriptions, just to prop us up that extra bit.

The media works best within the framework of a business, but it has to be the kind of business that recognizes its social role, abides by certain values and puts the quality of information above profit. Magazines and newspapers have traditionally served communities and not markets. In more ways than one, publications have belonged to readers, who expect them to be reliable and independent.

Our stories in Civil Society have invariably been about people and their lives — of what drives them, how they cope with problems and find solutions. The larger issues that confront India emerge from these personal and organizational narratives. The search for stories has taken us across India in wondrous ways. It really has been quite magical for us personally and professionally. As we pass on to our readers the India we discover, we also help make connections which otherwise might never have happened.

Around the time Civil Society was launched, 'citizen journalism' had become a fad. But that fad was mainly about getting random opinion from among readers/ viewers into mainstream media to give the impression that the latter cares. What Civil Society has tried to do is to get professional writers to in fact focus on the real issues concerning citizens, for after all 'civil society' is but a sum of all citizens.

In India a lot of guesswork goes into what readers and viewers want. There isn’t a scientific understanding of how media is consumed. Since real alternatives are not provided we don’t know what people could prefer. Much too much is assumed and decided by marketing heads.

In Civil Society we don’t second-guess the reader. Instead we take a purely journalistic call on the relevance of stories and we have met with a good measure of success. While an editorial decision may not always be perfect, it does extend the boundaries of what may work as a story. Journalism is about discovering what lies out there. The farther one travels the better. We are fond of saying that the people you will see on our covers are those whom you couldn’t imagine would be cover material. The fact is they are icons in their own right, but have been overlooked.

Our cover on small hospitals in the voluntary public healthcare sector did very well recently. At a time when medicine as a profession is seen as being too commercial, readers were struck by the stories of well-qualified doctors who had dedicated themselves to these hospitals in far-flung parts of India. It also emerged from the story that a national health policy needs to be more inclusive and mindful of the multiple entities in the health sector.

Similarly, when fruit and vegetable growers in a district in Karnataka succeeded in beating the lockdown and getting their perishable produce to buyers despite multiple restrictions during the pandemic, we saw a story in how an alert local administration can help the farm sector. To our minds this was not merely a local achievement in a Karnataka district, but an example with national relevance.

Social innovators plough a lonely furrow. They experiment with ideas whose time hasn’t come. Tracking them can be rewarding for journalists. We have followed the late Javed Abidi as he turned disabilities into a rights movement and got a law passed. Before he died he told us that each of the companies that now hired disabled people was deserving of a case study. Similarly, Arbind Singh struggled to win recognition for the rights of hawkers and also got a forward-looking law through Parliament. It was most interesting to see the Right to Information (RTI) Act take shape and become a law. Our first cover story was on RTI and Arvind Kejriwal, then an income-tax officer on long leave, was featured on the cover with the headline: ‘Tax man’s burden’. The law, of course, came out of a much larger campaign and for a long time we followed its twists and turns.

As masters of our editorial space we have had the luxury of heading off in different directions. There have been three cover stories on jackfruit thanks to our friend and colleague, Shree Padre. The response to each jackfruit cover has been great. Shree is passionate about jackfruit and so are we.

We highlighted the flaws in the SEZ (Special Economic Zones) policy when most TV anchors and editorial page writers were busy praising it. We were also interviewing Prashant Bhushan long before he had got so much attention and our headline read: ‘Who will judge the judges.' Affordable housing, government hospitals, urban slums and migrant  labour have all found space in our magazine long before they began getting the attention they now receive.

The media is going through a complicated crisis. Managements are increasingly beholden to governments. There is the problem of low revenues. Digital technology is changing the rules of the game. Neglect of skills has meant that there are fewer journalists with the abilities to provide the coverage that society needs.

Are smaller operations the way to go? We think so but it is difficult to say for sure. The media is a tricky business to be in. Being good is not enough. Perhaps we have just been lucky that Civil Society has survived and may continue to do so. But this much is certain — a democracy needs information it can trust and good journalists who can deliver it.

The articles in this section by Sanjaya Baru, Kiran Karnik, Patricia Mukhim, Shree Padre and R. Balasubramaniam all show in their own way the importance of media in our lives and how today it is at the crossroads.