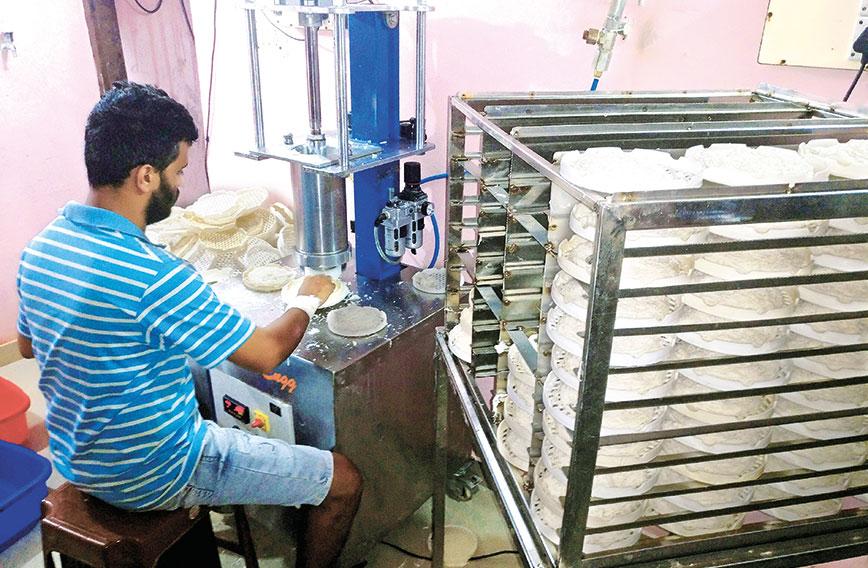 The noodle making machine at work

Getting Idiyappam from a machine

EVERY day, just before daybreak, a small farmhouse in Kottoor village swings into action. It becomes a bustling factory for just three hours — from 4 to 7 am.

What sort of factory is this? If you enter the premises before sunrise, you’ll be surprised to find that it is an idiyappam or rice noodle factory. Named Shavai, it manufactures and supplies idiyappam every morning to around 100 eateries in a 50-km radius from its premises.

Ten years ago, if someone had mooted the idea of starting a breakfast factory in Kottoor, a sleepy village in Kerala, people would have laughed. They laughed at 42-year-old Rajesh Majakkar too, when he started his rice noodle factory in this rural belt.

But the success of his venture has silenced all his critics. On an average, Shavai sells 3,000 idiyappams daily. During the pandemic, daily sales crossed 5,000 to 6,000 idiyappams  “Once schools reopen nearby, eateries will buy more idiyappams,” says Majakkar, a civil engineer who has been running a successful construction business for 15 years.

Two years ago Majakkar went to Dubai on an assignment. While eating in a restaurant, he happened to see an automatic idiyappam machine. It was the first time he had seen one. When he asked where it was from he was surprised to be told, it had come from Coimbatore.

Back home, Majakkar plunged into handling his construction company. But he kept recalling the rice noodle machine. He began to dream of starting a food business with it.

Then the pandemic started. Two relatives, brother-in-law Shrinidhi Nadumane and the latter’s brother-in-law, Shriharsha Chennangod, had returned to Kottoor, weary of city life. Majakkar entrusted the task of starting his venture to them.

Ready-to-cook noodles are not a novelty for people in Kasaragod. But ready-to-eat noodles are. Many companies in Coimbatore make different models of noodle making machines which work with a motor and pneumatic pressure. Majakkar bought a couple of machines.

Now, in the wee hours of the day, work begins in the factory. With a production rate of two noodles per minute, the machines easily reach their target for the day. Before daylight breaks, packets of idiyappam are packed into delivery vans and start their journey. The ready-to-eat idiyappam is sold within a few hours by hotels to thousands of customers.

Shavai rice idiyappams are priced at Rs.7 each and have a shelf life of only a day. Apart from Kasaragod city, Shavai’s noodles are sold in rural towns and hotels.  A helping of two idiyappams is priced at Rs.30 to 40 per plate and served with either chutney, sambar or kayihalu (sweetened coconut milk).

Shavai also gets orders for weddings, meetings and other gatherings. People in the vicinity of the factory come in the early mornings to buy directly from it. Such orders need to be placed the previous night. On Sundays, the company earns Rs.500 from local purchases.

The industrial method of making idiyappams differs slightly from the domestic method. In kitchens, rice is soaked in water, ground and then kneaded and turned into noodles. But in the factory, the batter is made with rice flour, kneaded, put in the machine and cooked after it emerges as noodles.

What is  remarkable is Majakkar’s inventiveness and creativity in running his business in which he has invested Rs.10 lakh. He has improved quality, cut production costs and innovated.

For example, Shavai’s noodles are much thinner than normal idiyappams. “Our noodles are now half in diameter compared to what the machine was producing earlier,” he says. “We had to spend considerable time and money to get micro holes put in our moulds to make the noodles finer. Such modified parts aren’t readily available. It required painstaking effort to find a workshop that could do this.

“When you eat any rice preparation, you feel like drinking water in between since your throat feels dry. We researched this aspect and our idiyappam is the answer.”

The team succeeded in making thinner noodles after failing several times. The first batch was sent to 10 hotels nearby for sampling. The delivery boys told the owners that the idiyappams were free but they insisted on paying. “From tomorrow send us regular supplies,” they said.

The first day itself 300 idiyappams were ordered. The next day 500 were ordered and the sales graph kept rising.

Shavai has recently started making idli and kadubu, another dish made from steamed rice. The company also offers an assortment of customized idiyappam options — you can buy carrot, beetroot, mint and tomato idiyappams.

“Fresh extracts of these vegetables are mixed in the batter instead of water,” explains Majakkar. These special idiyappams need to be ordered beforehand and are priced higher. The team will be experimenting with other vegetables and fruits like jackfruit and mango.

He also increased the production capacity of his noodle machines to 1,200 idiyappams per hour instead of 700. By using solar heated water for boilers and smaller, energy efficient burners, he reduced gas consumption by 40 percent.

Changing the noodles to micro sizes, finding methods to prevent noodles from sticking to one another during transportation are other examples of Majakkar’s research.

Shavai also plans to introduce a breakfast packet for travellers and daily wage workers. “They rush to work early morning, catching trains and buses. They don’t have time to make breakfast,” says Majakkar.

The breakfast packet will consist of a punnet box with two or three idiyappams and a local tangy chutney called sollameerya, made from tamarind and chillies. This chutney is a traditional dish of the Karad Brahmins, the community to which Majakkar belongs.