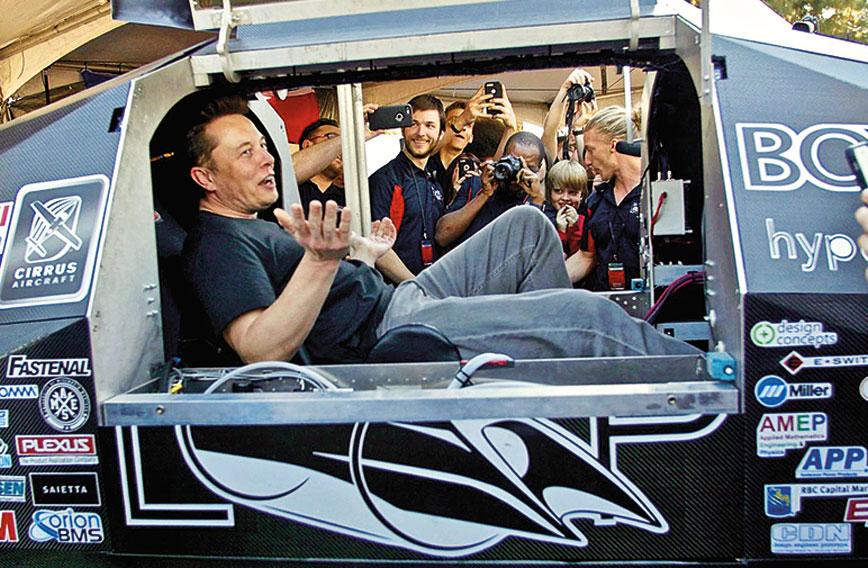 Elon Musk in a prototype of the Hyperloop pod

Travel on the cusp of big change

COMMUNICATE, don’t commute, advised Arthur Clarke. This famous aphorism-cum-prediction of the well-known futurist and sci-fi writer, made many decades ago, saw practical and large-scale realization around the world during the COVID-19 pandemic. India, particularly during the stringent and total lockdown enforced from March 25 last year, had little option but to practise this to the fullest extent that technological accessibility permitted. Travel, even to a nearby shop, had to be substituted by online ordering; work and classes were through the internet; entertainment moved to net-delivered streaming services; and even socializing was through onscreen video and audio. Clarke would have been happy to see that communication had, indeed, substituted commuting.

Most see this as the “new normal”, with travel or commuting being minimal. Yet, as we increasingly see, sociology trumps biology. Inherently social animals, we need to flock together even if biology tells us that it is unwise to do so amidst a pandemic. Recent images of markets, of Shivratri dips in the Ganga, and of the audience at T-20 cricket matches tell the story better than words.

Now, organizations and individuals are realizing the difficulties of WFH on a continuing basis in crowded, noisy and small homes, often with unreliable power and internet connections. Clearly, commuting is not going away — or drastically reducing — anytime soon. Therefore, even as there is continuing focus on ICT as a way to facilitate connectivity, transportation will continue to be important.

The cost and speed of movement of people and goods is an important determinant of economic growth. Technology and innovations in transportation — even though this field is not as glamorous as ICT or electronics — therefore need attention. While this is an area in which change is relatively slow, there are sometimes big and sudden leaps. Steam ships, the railroad, automobiles and aircraft brought drastic changes in the speed and ease of movement. Now, we seem poised for another leap forward in the technologies of transportation.

In automobiles, the century-old internal combustion engine (ICE) is set to be replaced with electric vehicles (EVs) becoming ever cheaper and providing similar functionalities. Without a doubt, the present issues around batteries — their efficiency, cost, recharging and weight — will be sorted out soon. The fewer components in EVs (compared to ICE engines) eases manufacturing processes, and their minimal air pollution is a vital plus. Yet, there are concerns. One is the power required for recharging batteries: if this is being generated by coal-fired thermal plants, it is only the point of pollution that is being shifted, without any big reduction in foul air quality. Second is the problem resulting from disposal of old batteries, which can result in toxic chemicals. Third is the fact that current batteries and EVs require raw material (lithium, rare earths) which are all imported, with China enjoying a virtual monopoly. As always, technology could take care of many of these concerns, but that may be some years away.

A new and promising area is the use of hydrogen as a fuel. This technology still has cost and safety challenges (given the inflammability of hydrogen), but would minimize pollution, since the waste product from its use is water. Hydrogen is considered especially appropriate for trucks because of the heavy loads they carry. The Union Budget for this year has proposed launching a Hydrogen Energy Mission for generating hydrogen from green power sources. It will certainly give this technology a big boost.

For economic reasons, it is necessary to shift more goods transport from road to rail, and increase the efficiency of the latter. In this, we need to take many leaves out of China’s playbook: in under two decades, it has the world’s largest system of high speed rail (HSR), adding 35,000 km in just the past decade. Its ambitious Belt and Road Initiative has created a train network from the factories of China to the big markets in Europe. Home-grown HSR technologies are enabling rapid expansion. We are yet hoping for our first high-speed train (from Ahmedabad to Mumbai, less than 400 km) by 2024. Substantial investment in HSR technologies and networks is essential, linking major ports, and commercial and industrial centres with one another. This can give a huge stimulus to the economy, while opening up the hinterland, decentralizing industry and decongesting cities.

China has also been an early mover in magnetic levitation, with the first Maglev train (in Shanghai, running at 400 kmph) beginning operation in 2004. This could be an important transportation technology for the future, and one we must keep abreast of.

Hyperloop — a brainchild of Elon Musk of Tesla and SpaceX fame — in which passenger pods operate at very high speeds in a sealed low pressure tube — is another futuristic technology which is already being tested. Combined with another Musk venture — Boring Company, which creates tunnels — it could run in tunnels under built-up areas, facilitating travel right into city centres.

In the air, while changes in aircraft technology are likely to be mainly incremental, drones are revolutionizing delivery of not just bombs, but also goods and packages. This is especially useful for difficult to access or disaster-struck areas, but also for doorstep delivery. Many Indian ventures — particularly start-ups — are active in this sphere, and we need to ensure that we stay on top of this very promising technology.

As in aircraft, ship technology is unlikely to see disruptive change. The decades-old excitement about hovercrafts, for example, has stayed at the “potential” stage. Automation, efficiency and higher speeds of ships will definitely be seen, but little beyond that. However, we can certainly use our many waterways for more and cheaper transportation, especially if they are made navigable.

Hugely expanding mass public transport is essential for intra-city movement. However, the best, most impactful and cheapest solution is a simple one. At little cost, we can re-plan cities to bring homes closer to workplaces, have proper pedestrian walkways, and create cycling paths that are safe. This will minimize pollution, reducing oil (or battery) dependence and make for a healthier citizenry. Of course, simple and low-cost solutions are the ones that are most difficult to sell!

Kiran Karnik is an independent strategy and public policy analyst. His recent books include eVolution: Decoding India’s Disruptive Tech Story (2018) and Crooked Minds: Creating an Innovative Society (2016). His forthcoming book is on India in 2030.