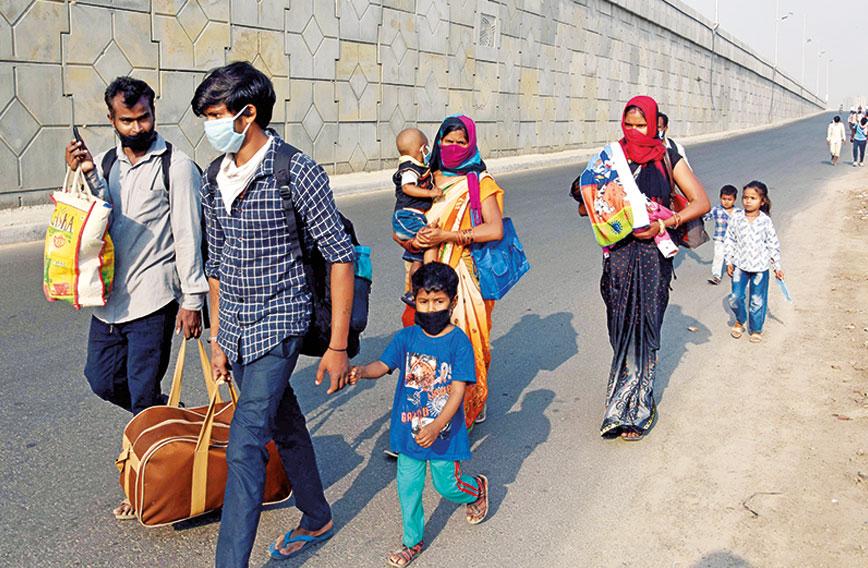 NRIs can vote, but migrants?

THE election-conducting machinery in our country has made persistent efforts over the past 10 years to enable six million voters, who are physically out of the country where polls are being held, to cast their votes; whereas 285 million who are eligible to vote and are physically present in the country are not able to cast their votes as the election-conducting machinery has made only token efforts to enable them to vote.

MRIs are those who cannot find any means of livelihood and sustenance in the place where they belong, where they are born and brought up, and therefore have to go away from “home” to earn a living. The key word is “have” — having to go away is not the same as going away by choice with the express purpose of improving one’s prospects in life.

One kind of MRIs are called ‘landless labourers’. These are villagers who do not possess any land and work as paid labour on the lands owned by ‘farmers’. This has two possible outcomes. One, some of these landless labourers can find work on the farmers’ land but that usually happens during the sowing and harvesting seasons. They are unoccupied during the intervening periods. Two, the entire landholding of the village may not be enough to provide gainful occupation to the entire lot of landless labourers. Both these outcomes result in a number of people not being able to find any means of livelihood and sustenance in their villages, and hence head to cities and towns to earn a livelihood. They are also referred to as ‘seasonal migrant workers’. They are casually employed and work in adverse conditions in return for meagre wages. Their contribution to the host economy is immense yet they exist on the margins of policymaking.

It appears that this unseen lot had come to the nation’s attention after the COVID-19 lockdown on March 24, 2020 when images of thousands of them walking long distances flashed on TV screens. But, it has not dented the indifference to their political exclusion.

Getting themselves registered at their places of work has two issues: First, it is not workable because, by definition, they move from place to place in search of work; and, secondly, it is not a simple process notwithstanding the provision of online registration. It takes at least two or three visits to the appropriate office to complete the process. MRIs work on daily wages and live hand to mouth. Every time they take a day off to get themselves registered as voters means loss of wages for that day. They cannot afford this.

Going to the place where they are registered as voters involves travel time meaning loss of wages, plus travel expenses — fare and food — and is unaffordable expenditure.

The net result is that a vast majority of 285 million MRIs are not able to vote.

For the NRIs, the action started in 2010. The Representation of the People Act, 1951 was amended to make special provisions for NRIs to get on the electoral rolls. The Registration of Electors Rules, 1960, were also amended to enable registration of ‘overseas electors’. Three PILs were filed in the Supreme Court (in 2010, 2013 and 2014). Under orders of the Court, the Election Commission of India (ECI) set up a committee to study the issue. This committee submitted its report in October 2014, recommending e-postal ballot, and voting through proxy.

The ECI wrote to the government in 2015, proposing proxy voting and postal ballots. A bill to amend the Representation of the People Act was passed by the Lok Sabha and was awaiting the Rajya Sabha’s approval when it lapsed with the dissolution of the 16th Lok Sabha.

This is where the matter rested until it was reported by the Indian Express on December 1, 2020, that “The Commission told the Law Ministry last week that it is ‘technically and administratively ready’ to extend the Electronically Transmitted Postal Ballot System (ETPBS) to NRI voters for elections next year in Assam, West Bengal, Kerala, Tamil Nadu and Puducherry.”

The Indian Express report created a flutter about the differential treatment of NRIs and MRIs.

A report in the Economic Times (ET) on December 21, 2020, said: “The Election Commission of India is examining a plan to allow migrants to vote for a candidate in their home constituencies from anywhere in the country,” adding that “The full Election Commission is set to soon deliberate a conceptual framework of the technology to enable vote-from-anywhere, with the 2024 Lok Sabha elections in mind, officials told ET.” Elaborating, the report said that the ECI had “set up a seven-member technical advisory group … in April … to work on a plan to develop a ‘remote voting framework’, (and) that a ‘prototype demonstration’ would be done in a month to ECI’.”

What does all this add up to? The phrases emphaized in the ET report make it clear that as far as the MRIs are concerned, the ECI is still at the stage of “soon deliberat(ing) …  (on) a conceptual framework of the technology”, and having set up a group “to work on a plan to develop a ‘remote voting framework’”; whereas for the NRIs “it is ‘technically and administratively ready’ to (provide this service) for elections next year.” It needs to be noted that this statement was made in 2020, so effectively, the ECI is ready to enable NRIs to vote now, in 2021!

Why is it that the government bends over backwards for six million people who don’t even live in the country and almost completely ignores 285 million who are physically present here? The reason is not hard to guess: NRIs have money, are organized and influential. The MRIs are mostly poor, scattered and are not an organized vote-bank.

Let the reader decide who should get priority to vote.

Jagdeep S. Chhokar is a former Professor, Dean, and Director In-charge of the Indian Institute of Management, Ahmedabad (IIM-A), and a founder-member of the Association for Democratic Reforms (ADR). Views are personal.