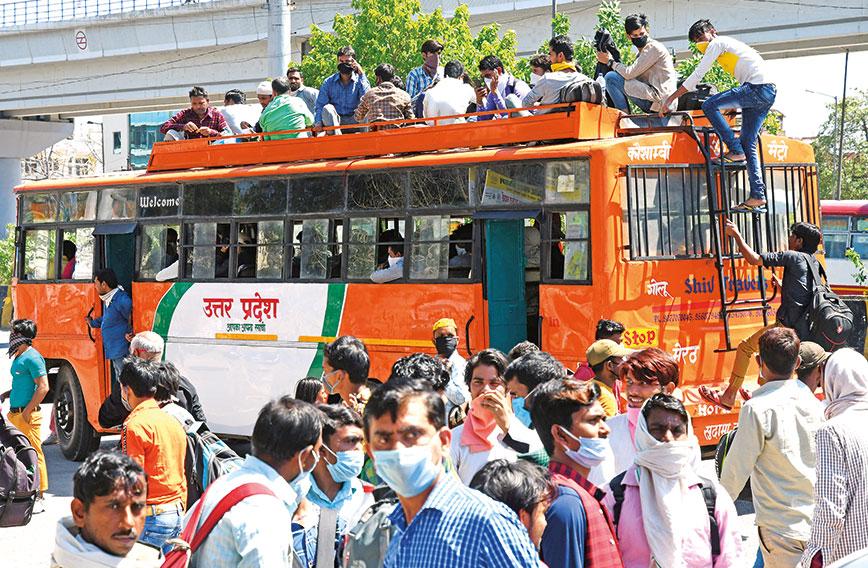 The tragedy of migrant workers following the nation-wide lockdown, imposed with four hours’ notice on March 24, is still fresh in the national consciousness. The lockdown was first extended to April 14, and then to June 8. Thousands of migrant workers in cities were rendered out of work with no salaries and with rent to pay despite the government’s instructions to the contrary. With whatever little money they had dwindling rapidly, they decided to go home to their villages. Since public transport such as trains and buses came to a standstill, the migrants were left with literally no option except to walk home.

Instead of empathizing with the plight of the migrants and facilitating their journey, the government came down heavily on them, issuing draconian instructions which said, first, migrants “who are travelling on foot within the district on highways/roads should be picked up, placed in buses and left in localities from where they started”. Second, even if travelling on a bicycle or on foot, migrants “should be turned back without exception”, and third, migrants walking home could even be “arrested and placed in custody”.

This led to the filing of several public interest litigations (PILs) in the Supreme Court. The first two petitions challenged the inhumane treatment of stranded workers and sought assuring of payment of full wages. After four hearings, all that the Court did was to merely call upon the government to look into the materials placed on record by the petitioners, and to “take such steps as it finds fit to resolve the issues raised in the Petition”.

Another petition was filed asking for migrants who wished to go home to be allowed to go rather than be forcibly held in “shelters” which could also mean “big indoor stadiums or other similar facilities (declared) as Temporary Jails”, and to arrange for their safe travel by providing necessary transportation. In the first hearing on April 27 the Court asked the solicitor-general to submit “the proposed protocol, if any, for movement of migrant workers …,” and asked it to be listed “after one week”.

Before the next hearing, the government issued instructions allowing the movement of migrant workers and announcing the running of “Shramik Special” trains with travellers paying 15 percent of the fare. A supplementary affidavit was filed on May 2 requesting that the migrants be allowed to travel free because most of them had already run out of money.

In the next hearing on May 5, the solicitor-general again assured the Court that the government was “taking all necessary steps for the movement of migrant workers who are stranded”. On the charging of 15 percent of the fare, the Court ruled “it is not for this Court to issue any order under Article 32 regarding the same”.

In conclusion, the Court said, “Taking note of the statement made by Shri Tushar Mehta, learned Solicitor-General and for the reasons as above the writ petition is closed.”

Meanwhile, PILs had also been filed in several High Courts, and many of them took a far more sympathetic view of the plight of migrant workers.

On May 26, 21 senior lawyers wrote to the Supreme Court, urging it to “actively (fulfil) its constitutional obligation of being the guarantor of the fundamental rights of citizens against State action”.

Taking everyone by surprise, the Supreme Court took suo motu cognizance of the migrants’ situation on May 26, ruling, “Adequate transport arrangement, food and shelters are immediately to be provided by the Centre and State Governments free of costs.”

What caused the court to order of its own volition on May 26 what it had specifically refused to do on May 5 on a PIL, is a mystery.

Two significant developments took place in the Supreme Court on March 31. One, “The Solicitor- General of India made a statement on instructions that at 11 am today, there is no person walking on the roads in an attempt to reach his/her home towns/villages,” and, second, “we are satisfied with the steps taken by the Union of India for preventing the spread of Corona Virus [COVID-19] at this stage”.

The significance of the first statement was that thousands of persons “walking on the roads in an attempt to reach his/her home towns/villages” could be seen on TV. The second was acceptance of the bare and unsubstantiated word of the legal representative of the Union of India, not even on affidavit, and to show satisfaction “with the steps taken” by the government by completely ignoring the suffering of thousands of migrants.

This totally uncritical acceptance of a statement which was not true and expressing satisfaction on that basis, is what baffled observers. It has been termed acquiescence to the Executive by some commentators. Others have attempted to justify it by saying that dealing with the coronavirus is akin to being at war and therefore the government needs a free hand. However, a 1942 judgment from the UK says:

“The fact that the nation is at war is no justification for any relaxation of the vigilance of the courts in seeing that the law is duly observed, especially in a matter so fundamental as the liberty of the subject — rather the contrary.”

On acquiescence to the Executive, another British judge observed in 1931 that “judges should not shrink from deciding such issues in the face of the executive”.

Three possible reasons for the change of heart by the Supreme Court are: (a) a clearly humanitarian stance taken by various High Courts, (b) trenchant criticism and (c) public-spirited individuals who persisted in filing petition after petition despite repeated rejection. There are possibly many more known only to the judges.

The lesson is that in a democracy nothing works on its own, notwithstanding constitutional obligations. As Rajendra Prasad and B.R. Ambedkar said, the Constitution is a mere document — it does not work on its own, it is worked by people. This obviously applies to all organs of the State, including the Executive and the Judiciary.

In the ultimate analysis, the buck stops with “We, the People”, and it is for the citizens to ensure that even the constitutional authorities do what they are expected to, and not go by their whims and fancies. As has been said by several people since, possibly, 1790, “eternal vigilance is the price of liberty”.